Separation Anxiety: What happens when we disassociate love and sex? 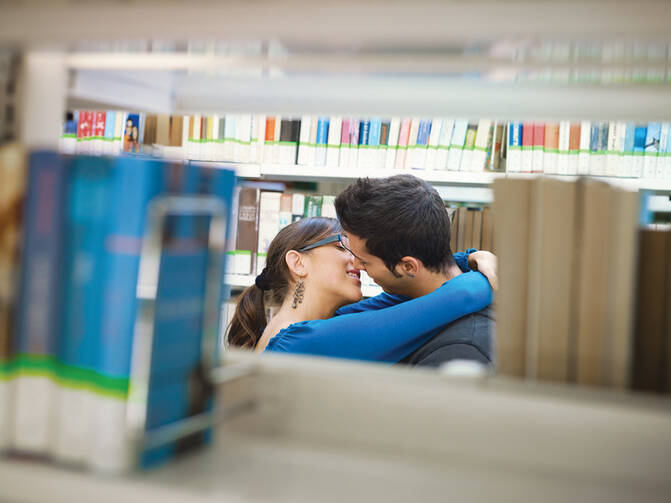 In her article in The New York Times, “Sex on Campus: She Can Play That Game, Too,” Kate Taylor describes a world of ambitious Penn undergraduates who put their personal interests and their résumés first. Many have chosen to avoid romantic relationships during college entirely in favor of “hooking up,” no strings attached. As they (and their male partners) describe it, money and status matter; but they don’t just happen—they are the result of hard work. If you want to become the head of the World Bank, you have to put in the hours. Relationships, therefore, become an afterthought at best. The theory is that anyone can find a partner later in life and then have a couple of children.

This situation is troubling—but not because these women want to “put themselves first.” It is important to have a good sense of one’s identity and needs before giving that self to another. The problem is that they seem so miserable while doing it. Much like the sex had by the characters on Lena Dunham’s HBO series “Girls,” the sex described by the Penn undergrads in the story sounds sort of grim; less like sex and more like work. One woman describes the man she regularly sleeps with this way: “We don’t really like each other in person, sober. We literally can’t sit down and have coffee.” Talking about their hookup, she sounds bored, like the oldest 19-year-old in the world: “[W]e watched TV, had sex, and went to sleep.”

One woman said, “I have to be drunk in order to enjoy it” and reported being barked at to “get down on [her] knees” and thinking, “I’ll just do it...it will be over soon enough.” Because the sex occurs outside of committed relationships and alcohol is involved, hookup culture can quickly lead to a culture of sexual assault.

Without love or friendship, we are left with the language of an economic exchange, the sexual partner as service provider. The women in the story speak of the “cost-benefit” analyses of having a relationship, and the “low risks and low investment costs” of hooking up versus putting the time and energy into a real friendship, which, they argue, may not lead to anything long term.

Surprisingly, these women may be avoiding relationships, friendships and even their own happiness, in order to live up to parental and societal expectations. They are following a script, which for many has been prescribed to them since puberty. It goes something like this: The worst thing that can happen to you between the ages of 18 and 30 would be to have a baby or get married; those are your prime achievement years. You went to a good college and you need to get a return on your investment. Then, in your late 30s, the worst thing that can happen to you is not to be able to have a baby or find a husband.

No wonder college-educated young women are stressed. It is a small window. And both messages are so extreme and so untrue that the result is a kind of constant, low-grade anxiety. But the message persists. When college-educated women hit the age of 30 or 32, they are pressured to suddenly flip a switch and settle down as a loving wife and mother with a great partner and a beautiful home in addition to being an impressive, lifelong careerist. And then they will “have it all.” They will be happy.

There are many problems with this narrative. For one thing, happiness does not grow out of isolation. What struck me most about the Penn undergrads in Taylor’s story was how lonely they seemed. They do not describe having close friendships with men or women, since they see other people primarily as competition. This is not the culture of free love. It is the culture of “cross sex off the to-do list after Pilates and before Marketing 101.” It is joyless.

There is nothing wrong with women and men wanting to have successful careers, and there is a legitimate conversation to be had about how to manage the demands of work and family life, but this is not the conversation these women are having. They are making the objectivist assumption that the only things in life worth doing are things you can put on a résumé. But in the end, without friendship or romance there is not much to write home about. Sharing your true self with others in friendship and relationship is an opportunity for personal growth, and despite the range of opportunities open to women today, it is one they are missing.

In a culture that values individualism and personal choice, we have forgotten that we are social animals, interdependent from conception, and that our relationships and communities determine, to a large extent, the quality of our lives. As Pope Benedict XVI wrote in “Caritas et Veritate,” “As a spiritual being the human person is defined by interpersonal relations. The more authentically he or she lives these relations, the more his own personal identity matures. It is not by isolation that people establish their worth, but by placing themselves in relation with others and with God.”

In his book Outliers, Malcolm Gladwell illustrates this point by telling the story of the village of Roseto, Italy. In the 1800s villagers from Roseto migrated to a town in Pennsylvania, where they created a prosperous community for themselves. Traveling physicians noted that, despite eating a high fat diet and exercising no more than normal, no one in the village of Roseto suffered from heart disease. There was also no suicide or violent crime. Rosetans lived long lives and died of old age. Nothing could be found in their genes to explain this anomaly. Researchers finally concluded that their close-knit community must be the source of their good health: multi-generational families living under one roof, neighbors knowing one another and stopping to chat in the street, respect for children and the elderly and everyone getting together for church on Sunday. The medical community had previously made the materialist assumption that only things such as genes, diet and exercise could be the cause of longevity, but Roseta proved what had already been codified in religion and myth: communities and relationships matter.

In the end, happiness requires more than having an impressive title to announce at a cocktail party, satisfying as that may be. True happiness is more than a fleeting feeling of bliss. It requires knowing that your life matters to other people. According to a recent study conducted by Princeton University, 50 percent of our happiness is based on our basic disposition, something that does not change. What is more interesting is that the study concludes that money and status account for only 10 percent of our total happiness after our basic needs are met. Despite living in comparative poverty, the average rickshaw driver in India reports about the same level of happiness as the average American. This is due in part to the conclusion that the remaining 40 percent of our happiness comes from our relationships. The study concluded, “If you want to be happier, improve your relationships.” It also found that people in the United States with an annual household income of $75,000 a year are about as happy as anyone gets. After that, making more money did not mean greater well being, since happiness came from the feeling that you had enough money to spend time with and do things for other people.

But this is a lesson many of us have yet to learn. In the United States we equate an ordinary life with a failed one. Wendell Berry describes the modern marriage in Feminism, the Body and the Machine as, “an intimate ‘relationship’ involving (ideally) two successful careerists in the same bed...a sort of private political system in which rights and interests must be constantly asserted and defended. Marriage in other words, has now taken the form of a divorce.” Berry lives on his family’s farm in rural Kentucky, and his point is simple: If you always have to argue about who does what, you will be unhappy. If everyone just picks up a shovel and does their part, you can do great things. It is not possible to be a good co-worker, spouse or friend if you are a narcissist.

Too often the simple act of being present to another human being is perceived as detrimental to career goals. Taylor, in her article, writes: “Her classmates tried very hard to separate sex from emotion, because they believed that getting too attached to someone would interfere with their work. They saw a woman’s marrying young as either proof of a lack of ambition or a tragic mistake that would stunt her career.”

Of course, every generation tries to correct for the mistakes of the generations that came before. Too often women sacrificed all their passions and interests in order to provide for husbands and children, who were unwilling or unable to sacrifice much in return. But the answer is not to give up on sacrifice. It is to realize that in the best relationships the sacrifice goes both ways.

As Aristotle knew, our characters are formed by what we repeatedly do. We cannot just flip a switch when the time is right and care about other people. If we spend the first half of our lives looking out for ourselves and our careers while treating other people like disposable objects that exist to serve our needs, that will influence our characters. Later, if we decide to get married and have children, our spouse, children and co-workers, who interact on a daily basis with a selfish person, will suffer.

There is nothing wrong with women and men striving for fulfilling careers. There is something wrong with an objectivist narrative, which says that the only things worth doing are self-serving. In this narrative all of life becomes a means. Nothing is a good in itself. Everything becomes instrumentalized (sex, kids, job, spouse, house, income). We spend our lives accruing honors trying to prove that we have value, when what truly makes us happy is to contribute to our communities in a meaningful way, to love and be loved.

In a detached environment, the message from the church sounds impossibly strange, and yet it is one worth remembering: It is not unambitious to want to have a good marriage or close friendships or to get along with one’s family or know one’s neighbors. It is, in fact, extremely ambitious. People do not accidentally have harmonious relationships, any more than they accidentally become secretary of state. They put in the hours, and their practices become their habits and their habits become their virtues and their virtues become their lives.

There are many ways to live a happy and fulfilled life: single, married, with children, without them. Goodness is diverse. But we are made for love and friendship. As Cicero wrote, “Friendship improves happiness and abates misery,” not by scoring us the corner office, “but by doubling our joys and dividing our grief.”

Anna Nussbaum Keating is the co-owner of Keating Woodworks in Colorado Springs, Colo., and is co-writing The Catholic Catalogue, a field guide to Catholic practice and culture. She also runs a website by the same name.