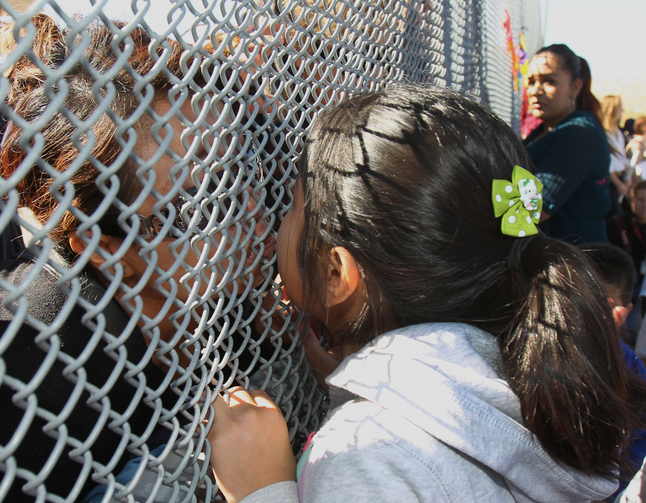 One of Pope Francis’s goals during his visit to Mexico is to highlight the issue of migrants and their mistreatment by governments in the region, particularly children and families fleeing violence in Central America.

In calling attention to this issue, the Holy Father will inevitably be confronted with the question of national sovereignty and the rights of nations to control their borders: Do governments not have the right to determine who enters their territories? While the church has a well-developed and well-known teaching on the rights of persons to migrate, less clear to many observers—and mischaracterized by critics—is its teaching on the right of nation states to control their borders, and the means that they choose to do so.

It may come as a surprise to detractors of the Catholic position on immigration, but the Catholic Church acknowledges and supports the right of nations to control their borders and to enforce their laws. Indeed, enforcement is a key ingredient of a sound immigration policy, so long as it includes due process protections and safeguards human dignity.

Still, some characterize the church position as an “open border” policy that discounts the government’s responsibility to ensure the integrity of national borders. Others have gone so far as to say that the church in America wants more Catholics in the pews and thus encourages lawbreaking: a “come one, come all” posture.

In truth, Catholic teaching, as articulated by several popes through the years, is remarkably clear on national sovereignty and borders. Pius XII, the author of “Exsul Familia”—known as the Magna Carta on Catholic teaching on migration—wrote to U.S. bishops in 1948 that while national sovereignty “must be respected,” migrants should be accepted as long as “the public wealth, considered very carefully, does not forbid this.” Saint John XXIII, in his encyclical, “Pacem in Terris” ("Peace on Earth"), taught that nation-states have an obligation to the “universal common good” that requires them to welcome newcomers: “When there are just reasons in favor of it, he [every human being] must be permitted to emigrate to other countries to take up residence there.” (No. 25)

The Catechism of the Catholic Church reaffirms this position, stating that richer nations have a higher obligation to accommodate migrants and refugees than poorer ones. “The more prosperous nations are obliged, to the extent they are able, to welcome the foreigner in search of the security and means of livelihood which he cannot find in his country of origin.” (No. 2241)

In their joint pastoral letter, “Strangers No Longer: Together on the Journey of Hope,” the U.S. and Mexican Catholic bishops offered this prescription: “The Church recognizes the right of the sovereign to control its borders in search of the common good. It also recognizes the right of the persons to migrate so they can realize their God-given rights. These teachings complement each other. While the sovereign state can impose reasonable limits on immigration, the common good is not served when the human rights of the individual are violated.”

In other words, the right of the sovereign to enforce its borders does not give it the right to violate human rights in the process. The ends do not justify the means. States exist to protect the rights of persons—a responsibility that extends beyond their citizens.

The Rights and Obligations of Nations

Pope Francis has the opportunity to further expand this teaching in Mexico. He is painfully aware of the human impact of borders and regularly speaks against the kind of globalization that allows commerce and capital to cross borders but otherwise uses and then disposes of the individual who does the same. “We need to avoid a common temptation these days,” he told Congress in September, “to discard whatever proves troublesome.”

So how will Pope Francis reconcile his call to governments to protect immigrants and refugees while also acknowledging their right to manage their borders and enforce their laws?

His recent address to the Vatican diplomatic corps gives us a clue. Acknowledging the problems confronting European nations in receiving thousands of Syrian and other refugees, he insisted that they must continue to find ways to protect them: “The present wave of migration seems to be undermining the foundations of that ‘humanistic spirit’ which Europe has always loved and defended. Yet there should be no loss of the values and principles of humanity, respect for the dignity of every person, mutual subsidiarity and solidarity, however much they may prove, in some moments of history, a difficult burden to bear.”

In Mexico, the Holy Father, in reference to the families and children fleeing violence in Central America, will likely continue this theme. He will remind us that Catholic teaching, while recognizing the authority of states to manage their borders, holds governments accountable to a greater obligation to protect the lives and dignity of human beings who are seeking refuge or a better life. This is neither a new church teaching nor an “open borders” posture, but a recognition of the inequality in the world and the need for all nations to work together to promote the universal common good.

In Pope Francis’ view, the universal common good is far from being met—he characterizes the status quo as the “globalization of indifference.” With a record 60 million displaced around the world, now is not the time for nations to turn inward, but to work together to protect migrants and refugees and address the causes of the global crisis.

As he said in his 2016 World Day of Migrants and Refugees statement, nations cannot stand idly by as fellow human beings suffer and die; otherwise they are partially to blame. “The tragic stories of millions of men and women daily confront the international community as a result of the outbreak of unacceptable humanitarian crises in different parts of the world,” the pope said. “Indifference and silence lead to complicity whenever we stand by as people are dying of suffocation, starvation, violence, and shipwreck.”

But the Holy Father makes another point: only by addressing in a straightforward and direct way the issues of migration and its underlying causes would nations, and the global community, ensure the common good and security of all, including their own countries. Nations that close their doors to those in need altogether would eventually see their own demise.

In a recent press conference, the Holy Father indicated his desire to cross the U.S. border in “solidarity” with Mexican migrants, a provocative statement that suggested, at least to some, that he supports irregular migration. “To enter the United States from the border with Mexico would be a beautiful gesture of brotherhood and support for immigrants," he said.

To the contrary, the pope’s message is that nations, including the United States, should reconsider and remake their laws so migrants can safely migrate to work and support their families and refugees can find protection. He is reasserting, in a profound way, that nations have a moral obligation to accommodate migration to the degree possible, consistent with the time-honored teaching of the church on human dignity and the common good. He is also saying that in controlling their borders, governments must respect the human and due process rights of migrants, who are not, as he said in his 2014 World Day of Migrants and Refugees, “pawns on the chessboard of humanity.”

His trip to Lampedusa island, off the coast of Italy, in July 2013 to remember migrants who drowned at sea, is instructive, as the U.S.-Mexico border also is a site of migrant deaths. Laying a wreath in the Mediterranean, Pope Francis asked for forgiveness “for those who at the global level have created situations that lead to these tragedies.” He no doubt will deliver a similar message to the governments in this part of the world.

Pope Francis will reportedly lay flowers at a cross and pray when he visit the border on Wednesday. Whether he will make a more significant symbolic action is unclear, but what will be clear is his position that, given the economic inequality and violence in the world, the rights of migrants, more often than not, must trump (pun intended) national borders. In the end, sovereign states, individually and collectively, must live up to their very purpose: to safeguard God-given rights and serve the common good.

Kevin Appleby is the senior director of international migration policy for the Center for Migration Studies of New York and the Scalabrinian International Migration Network.