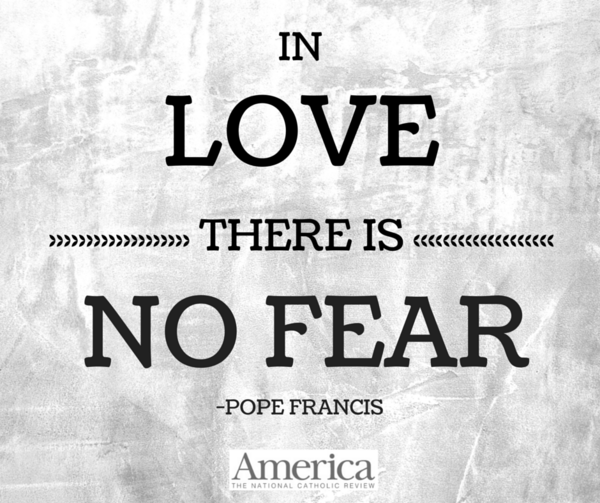 Pope Francis said only the Holy Spirit has the power to open our hearts to God and his love and not thousands of yoga sessions or Zen spirituality courses. His words came during his homily at morning Mass on Friday celebrated in the Santa Marta residence.

The Pope’s reflections came from the day's gospel reading that recounted how the apostles were terrified when they saw Jesus walking on water.  And the reason for their terror, he explained, is that their hearts were hardened.

Pope Francis said a person’s heart can be made of stone for many reasons, such as, for example, a painful experience in one’s life. But as he went on to point out, another reason for hardened hearts is because people are closed in on themselves.

“Creating a world within one self, all closed in.  Closed within oneself, in one’s community or parish, but always closed in.  And this closure can revolve around so many things. But let’s think about pride, self-sufficiency, thinking I am better than others, and vanity too, right?  We have ‘mirror-men and women’ (who are wedded to their own image in the mirror), who are closed in on themselves and are constantly looking at themselves, right? These religious narcissists, right?  But they have a hardened heart because they are closed in on themselves, they are not open.  And they seek to defend themselves with these walls that they have created around themselves.”

Hardened hearts because of insecurity and fear

The Pope said these hardened hearts in people can also arise from a problem of insecurity, such as those who barricade themselves behind the laws and rules, as though inside a prison, to feel safer and follow these rules to the letter, “When a heart becomes hardened, it’s not free and if it’s not free it’s because that person isn't capable of love, that was the fate of the Apostle John in the first Reading.  A love that’s perfect banishes fear: in love there’s no fear, because fear is expecting a punishment and a person who's afraid doesn’t have a perfect love. He or she is not free. They are constantly afraid that something painful or sad will occur, that will cause their life to go badly or will endanger their eternal salvation… What an (over-active) imagination, because he or she can’t love. A person who isn't capable of loving is not free.  And their heart was hardened because they hadn’t learnt how to love.”

Pope Francis concluded his homily by stressing that only the Holy Spirit can teach us how to love and free us from our hardened hearts.

“You can follow thousands of catechism courses, thousands of spirituality courses, thousands of yoga or zen courses and all these things. But none of this will be able to give you the freedom as a child (of God).  Only the Holy Spirit can prompt your heart to say ‘Father.’ Only the Holy Spirit is capable of banishing, of breaking that hardness of heart and making it … soft?  No, I don’t like that word, … ‘docile’.  Docile towards the Lord.  Docile when it comes to the freedom to love.”

Vatican Radio
Show Comments (
1
)
Comments are automatically closed two weeks after an article's initial publication. See our comments policy for more.
william lupinacci
7 years 10 months ago
Why isn't the headline 'Catechism classes won't bring God's freedom.' That's the actual start of the sentence that this headline is based upon.