Pope Francis says that we have a mother “who defends us, teaches us, accompanies us; who is not ashamed of our sins." 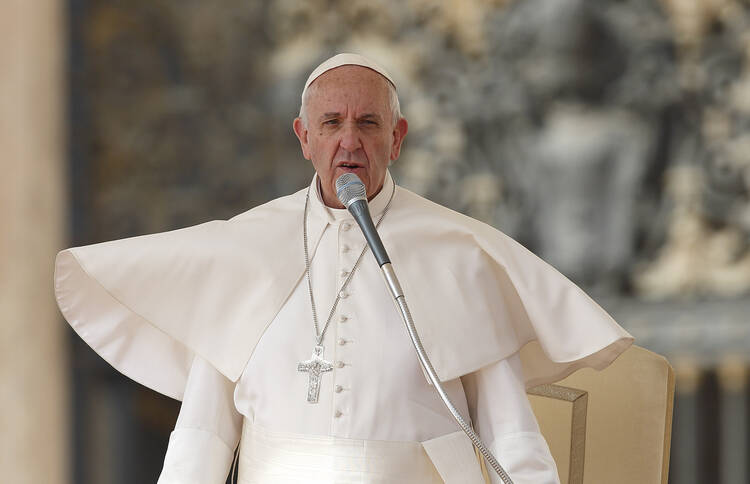 In a “world that suffers the crisis of a great orphanhood,” we have a mother who accompanies and defends us. That was the message of Pope Francis during the morning Mass at the Casa Santa Marta on the feast of Our Lady of Sorrows.

“And Mary heard these things. She suffered terrible humiliation. And she also heard the dignitaries, even some priests whom she respected, because they were priests, [saying] ‘You who are so good, come down! Come down!’ while her son was naked [on the cross]. And Mary had such great suffering, but she didn’t go away. She didn’t deny her son! He was her flesh.”

Pope Francis recalled that when he was visiting prisoners in the jails in Buenos Aires, he always saw lines of women waiting to enter. “They were moms. But they were not ashamed; their flesh was there inside. And these women suffered not only the shame of being there—'Look at her! What did her son do?'—but they also suffered the ugly humiliation of searches, which they had to undergo before entering. But they were mothers, and they went to find their own flesh. And so it was with Mary. She was there, with her son, with that very great suffering.”

The mystics of the early centuries, Pope Francis said, counsel us to take refuge under the mantle of the mother of God in moments of spiritual turbulence: “The devil can’t enter there.” He continued, explaining that Mary is a mother, and she will defend as a mother. The West later took this advice to heart and composed the Latin version of the Marian antiphon: Sub tuum praesidium, “under your mantle, under your protection, O mother!” We are safe there, he said.

“Perhaps our help lies in saying ‘Look to your mother!’” We have a mother “who defends us, teaches us, accompanies us; who is not ashamed of our sins. She is not ashamed, because she is our mother. May the Holy Spirit—this friend, this companion along the way, this Paraclete or advocate whom the Lord has sent—help us understand this very great mystery of the maternity of Mary.”