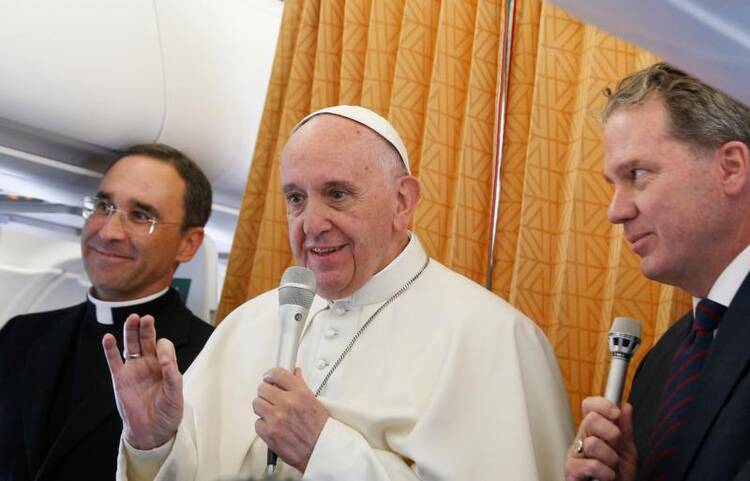 The Catholic Church's insistence that it cannot ordain women to the priesthood and episcopacy is a teaching likely to last forever, Pope Francis said.

After being hosted by the Lutheran Church of Sweden, which is led by Archbishop Antje Jackelen of Uppsala, the nation's first woman primate, Pope Francis was asked Nov. 1 if the Catholic Church might one day have women priests and bishops.

As he has done in the past, the pope responded that the question was settled in 1994 by St. John Paul II, who taught that because Jesus chose only men as his apostles, the ordination of women in the Catholic Church is not possible.

He was asked, "Really? Never?" And he responded, "If one carefully reads the declaration of St. John Paul, it goes in that direction, yes."

In one of his briefest airborne news conferences, Pope Francis spent just over 40 minutes with reporters and answered six questions ranging from Sweden's newly restrictive immigration policy to the role of women in the church. He also was asked about his experience with charismatics and Pentecostals, the roots of his concern about human trafficking, secularization in Europe and his meeting in late October with Venezuelan President Nicolas Maduro.

Christians must never close their hearts to refugees and migrants, but governments have a duty to regulate the flux of newcomers as they allocate resources to ensure their integration into society, he said.

"It's not human to close one's heart," the pope told reporters flying with him from Sweden back to Rome.

As he has in the past, Pope Francis insisted nations live up to international agreements offering special welcome and protection to refugees fleeing war and persecution. While Catholic social teaching holds that every person has a right to migrate in search of a better life, accepting newcomers is a serious obligation when the person's life is at risk.

Europeans should not be frightened by the latest wave of newcomers, he said. "Europe was made with a continual integration of cultures, many cultures."

The key, he said, is to ensure a proper integration of newcomers with language lessons, a home, schools and jobs. "The danger is that when a refugee or migrant is not integrated, he or she is 'ghetto-ized.'"

Responding to the question about Maduro, Pope Francis said he met with him at the president's request. "I listened to him for half an hour," he said. "I asked a few questions. I heard his opinions. It's always good to listen to both sides."

Like in any conflict, he said, "either you dialogue or you scream." The political and social tensions in Venezuela -- tensions that have unleashed a major economic crisis and huge suffering for many -- must be resolved with dialogue, he said.

The Vatican, he added, is supporting dialogue in Venezuela and, at the invitation of both the government and the opposition, has sent Archbishop Emil Paul Tscherrig, the nuncio to Argentina, as an observer.

The secularization of Europe, or of any society, the pope said, is usually the result of one of two factors: "a weak evangelization" caused by "lukewarm Christians" or a cultural process in which a growing number of people start thinking they are the lords of history.

A "healthy" form of separation of church and state is not the culprit, he said.

Especially on a contentious issue about which many people feel strongly, it's worth reminding everyone commenting here to please read the comments policy.

In particular, please pay attention to points 4 ("be charitable") and 6 ("choose your spots").

Assuming that people who disagree with you are motivated (for example) either by defense of the patriarchy or by a complete disregard for obedience to the church, as if you've been able to fully understand their motives within a single comment, is likely to be uncharitable. Needing to refute everyone who takes a contrary position is going to lead to over-commenting. Pick one spot, or at most two, and say what you have to there, and then let other people speak.