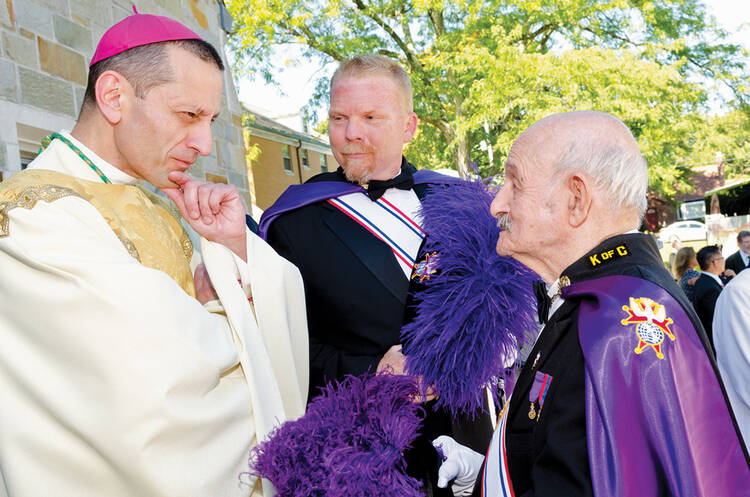 Diocesan synods may be making a comeback. In a country where such local synods are rare, three U.S. dioceses have recently concluded or launched their own. Earlier this year, the Diocese of Bridgeport convoked a synod that will continue through September 2015, and the Diocese of Juneau and the Archdiocese of Miami completed synods in 2013.

On June 29, Bishop Frank Caggiano of Bridgeport presided over an Evening Prayer service to kick off his diocesan synod, the first of its kind in that Connecticut diocese in 32 years. Inspired by the call of Pope Francis for greater pastoral creativity at the local level, the Brooklyn-born prelate convoked the synod in February with a series of seven listening sessions to hear the concerns of parishioners and formulate a pastoral plan for the future of the diocese.

According to the Diocese of Bridgeport, more than 1,700 local Catholics voiced their concerns to the bishop in the spring listening sessions. The new bishop used what he learned to describe four themes for the upcoming work of the synod: empowering youth, building bridges to those who have left the church, finding new ways to promote charity and justice within the diocese and strengthening local communities.

“Too many of our Catholic brothers and sisters feel unwelcome, as if they don’t belong, and they feel no one misses them, but we do miss them,” Bishop Caggiano told a group of about 650 at the prayer service.

According to Brian Wallace, the Diocese of Bridgeport’s director of communications, Bishop Caggiano wanted to launch the synod in order to get to know his new diocese better before making pastoral decisions about how to care for it. Bishop Caggiano was installed in September 2013.

Of the process, Wallace said, “What struck me was the sense of loss that a lot of people have about Catholics no longer participating in parish life.”

He added, “A lot of people in the youth listening session told the bishop that young people don’t believe. They want him to do something about it.”

The formal work of the synod begins this September with 400 participating delegates from the diocese’s 82 parishes and 32 elementary and high schools. Those delegates will participate in learning sessions at Fordham University that look at best practices throughout U.S. dioceses on issues like pastoral outreach to divorced and nonpracticing Catholics. They will also propose innovative solutions of their own. When the synod concludes its work in September 2015, the delegates will formulate a pastoral plan for the diocese.

One challenge emerging from the listening sessions is the need to serve a diocese with many different perspectives and needs, which is in many ways a microcosm of the larger church. “A lot of people who spoke have children and grandchildren who are divorced,” Wallace said. “They want the church to reach out more clearly to divorced Catholics.

“Some people wanted to see the church more open to liberal issues, while others wanted more conservative things like Latin Mass and adoration chapels,” Wallace said.

According to Wallace, people who attended the sessions had great admiration for Catholic charitable work and Catholic schools. But they also asked Bishop Caggiano for more adult catechesis programs and for other opportunities for ongoing faith formation.

The author, a Jesuit, is a summer editorial intern at America.