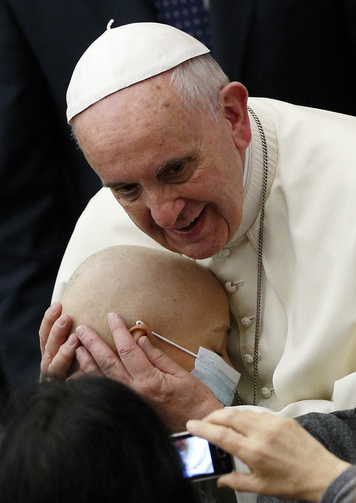 Pope Francis denounced a "false compassion" that would justify abortion, euthanasia, artificial reproduction technologies and medical research violating human dignity. And he urged medical doctors to "go against the current" and assert "conscientious objection" to such practices, which he called sins "against God the creator."

The pope made his remarks Nov. 15 in a meeting with members of the Association of Italian Catholic Medical Doctors.

"The dominant thinking sometimes suggests a false compassion, that which believes it is helpful to women to promote abortion; an act of dignity to provide euthanasia; a scientific breakthrough to produce a child and consider it to be a right, rather than a gift to welcome; or to use human lives as guinea pigs, presumably to save others," Pope Francis said.

"We are living in a time of experimentation with life. But a bad experiment. Making children rather than accepting them as a gift, as I said. Playing with life. Be careful, because this is a sin against the Creator: against God the creator, who created things this way," the pope said.

Catholic moral teaching forbids abortion, euthanasia, the use artificial reproduction technologies such as in-vitro fertilization and research that involves the destruction of human embryos.

"Fidelity to the Gospel of life and respect for life as a gift from God sometimes require choices that are courageous and go against the current, which in particular circumstances, may become points of conscientious objection," Pope Francis said.

The pope said the church opposes abortion and euthanasia not only as a matter of faith or philosophical principle but as a question of science.

"It is a scientific problem, because there is a human life there, and it is not lawful to do away with a human life to solve a problem," he said. "In ancient and modern thought, the word 'kill' means the same thing."

The pope urged doctors to practice true compassion as "good Samaritans, caring in a special way for the elderly, the infirm and the disabled."

Show Comments (
1
)
Comments are automatically closed two weeks after an article's initial publication. See our comments policy for more.
G Miller
5 years 3 months ago
So what is a woman to do when they find themselves in following situation? A woman is married and the mother to two children. Her second pregnancy was difficult and she is told by doctors to not have any more children. So she follows Church teaching and eschews "the pill." But, one day she finds herself pregnant and gaining large amounts of weight in rapid fashion. Her biology is responding exactly as the doctors expected after her last difficult pregnacy. There are no guarantees that the child will go full term or that she will survive the pregnancy. Is she not obliged to terminate the pregnancy to save her own life and fulfill her prior commitment to her husband and two living children?? Does the Church not recognize that these situations are more complex than "abortion is bad??"
Advertisement