Skip to main content
Signs Of the TimesMarch 11, 2013 issue 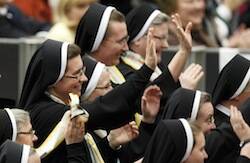 A diaconate for women should be considered as a new role for women in the church. Cardinal Walter Kasper made this proposal during a study day discussing how to involve more women in church life, convened as part of the spring assembly of the German Bishops Conference in the city of Trier, in western Germany, on Feb. 21. Kasper spoke of a “deaconess” role that would be different from the classic deacon but could include pastoral, charitable, catechetical and special liturgical functions. The deaconess would not be designated through the sacrament of orders, but by a blessing. Many women already perform the functions of a deacon, he argued, so as a practical matter the possibility cannot be ignored. Cardinal Kasper noted that the female diaconate was foreseen in the church in the third and fourth centuries. Regarding the ordination of women, however, the cardinal said, “I do not think you could change anything in the fact that women cannot be ordained priests; it is the unbroken tradition of the Eastern Church as well as the West.”