Skip to main content
Signs Of the Times
March 11, 2013 issue 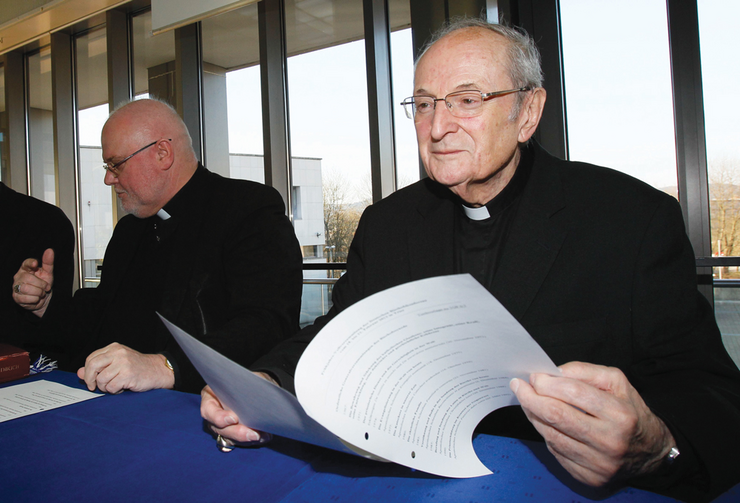 After two Catholic hospitals in Germany provoked an outcry in January when they declined to offer emergency contraception to a reported rape victim, German bishops agreed on Feb. 21 to permit certain types of “morning after” pills to be administered to women who have been sexually assaulted. While the church remains opposed to abortion and artificial birth control, in Germany it will now differentiate in cases of rape between pills that prevent sperm from fertilizing an egg in the womb and pills that induce an abortion.

Archbishop Robert Zollitsch of Freiburg, chairman of the German episcopal conference, said that at its spring meeting in Trier the conference had “confirmed that women who have been victims of rape will get the proper human, medical, psychological and pastoral care” at church-run hospitals.

“That can include medication with a ‘morning-after pill’ as long as this has a prophylactic and not an abortive effect,” he said in a statement. “Medical and pharmaceutical methods that induce the death of an embryo may still not be used.” That means there is no change to the church’s ban on so-called abortion pills based on the drug Mifepristone or RU-486.

The 25-year-old victim at the heart of the policy shift had been referred to Catholic hospitals in Cologne after she was drugged at a party and woke up on a park bench fearing she had been raped. In a statement on Jan. 31, Cardinal Joachim Meisner of Cologne said her experience “shames us deeply because it contradicts our Christian mission and our purpose.”

The German bishops’ decision received the endorsement of a Vatican official on Feb. 22, who said the church has accepted the possibility of preventing ovulation by means of medication in a woman who has been raped as an “unassailable rule” for 50 years.

According to Carol Keehan, D.C, president and chief executive officer of the Catholic Health Association, “misunderstanding” surrounds the issue. Some, despite scientific evidence to the contrary, insist that “morning after” treatments act as abortifacients, and others allege that rape victims cannot receive proper care at Catholic hospitals in the United States. Neither is true, said Sister Keehan. The church’s “Ethical and Religious Directives for Catholic Health Care Services” are clear on the permissibility of treating rape victims with contraceptive drugs. Sister Keehan said, “Frankly I am not sure of any [U.S. Catholic] hospitals that do not allow it.”

Hospitals that maintain rape treatment centers, both Catholic and non-Catholic, according to Sister Keehan, are the best places for rape victims to be taken because they specialize in treatment for sexual assault. They will provide emergency contraception and preventive care for sexually transmitted diseases and H.I.V., and they will be more experienced in evidence collection and counseling.

“It may be because of a confusion about the E.R.D. and a lack of experience in treating rape victims,” she explained, “that some Catholic hospitals may not offer contraception.”

So-called morning-after contraception has become one of the major sticking points in the current dispute between the U.S. bishops and the Obama administration over new mandates included in the Affordable Care Act. Though the A.C.A.’s new requirements for women’s health care exclude RU-486 specifically, they do include Plan B and ella. Some who oppose the new mandate describe these drugs as abortafacients, but emerging medical research indicates that the drugs work by preventing ovulation from occurring.

“Hospitals and caregivers sometimes get pressure and misinformation,” said Sister Keehan. “[But] Catholic hospitals need to be places where a woman experiencing this horrible trauma gets the best and most compassionate care.”

This article also appeared in print, under the headline “Church Officials Address Morning After Pills in Rape Cases,” in the March 11, 2013, issue.