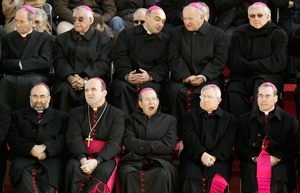 Catholic bishops from Spain's Basque region have apologized for keeping quiet about the killing of priests by right-wing forces during the Spanish Civil War from 1936 to 1939. "The memory of these priests has never faded in the eyes of their families, parishioners and diocesan presbyteries, nor (in the eyes) of the religious orders to which they belonged," said Bishop Miguel Asurmendi Aramendia of Vitoria. "What is not justifiable or acceptable any longer is the silence in which our church's official media has wrapped their deaths. We believe such a long silence was not only a wrongful omission, but also a lack of truth and an act against justice and charity, for which we humbly ask forgiveness from God and our brethren," the bishop said at a Mass for 14 priests killed by the late Gen. Francisco Franco's nationalist army on July 11. At the Mass, concelebrated by more than 200 Catholic clergy, Bishop Asurmendi said the priests were denied public burial rites, and most of their deaths were not recorded in diocesan registers. Speaking on behalf of all Basque bishops, he said the church wished to "recognize and repair" the damage and to "serve the truth by purifying memory."

This article also appeared in print, under the headline “Basque Bishops Apologize for 1930s Deaths,” in the July 20, 2009, issue.