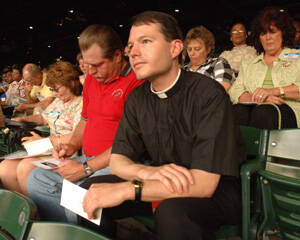 In 2008 the sociologist Dean Hoge said: “We need at least a doubling of ordinations to maintain the American priesthood as we know it now. But this is impossible.” Of current diocesan priests, only 70 percent are available for parish ministry, with the rest sick, retired or absent for a variety of reasons, according to Mary Gautier of the Center for Applied Research in the Apostolate. An increasing number of Catholics are unable to participate in a Sunday or weekday Mass. All this prompts the question, Will the priest shortage impose a eucharistic famine on the Catholic people?

The de facto remedy already applied in many places— making the priest a circuit rider moving from parish to parish to dispense the sacraments—risks narrowing the ministry of the priest and impoverishing the Christian life of the communities he serves. A narrowly sacramental definition of priesthood satisfies the requirements of only one of the three canons that define the pastoral responsibilities of the priest, Canon 530. As a consequence the sacramental office is as a practical matter severed from its integral connection with comprehensive pastoral care. Canons 528 and 529 provide a broader understanding of the priestly ministry. The first sees the priest as one who instructs, catechizes, fosters works of justice, shows special care for the education of children and brings the Gospel to those who have ceased to practice the faith. The second requires that he should come to know the faithful entrusted to his care, visit families, share their concerns, worries and griefs, help the sick and seek out the poor, the afflicted and the lonely. Diminishing numbers make it difficult to carry out this holistic vision of the priest’s pastoral ministry.

We hope that the upcoming Year of the Priest will lead to a broader discussion of the priesthood in the contemporary world and, in particular, will open examination of the various ways the shortage of priests can be addressed honestly and with imagination. New vocations can be promoted through youth rallies, the Internet and, as always, with prayer. In addition, the pastoral needs of parishes may also be met in part by more effective pastoral assignment of permanent deacons and by increased leadership by lay men and women.

What about the recruitment and training of married men as priests? Married priests already minister in the Catholic Church, both East and West. Addressing the married clergy of the Eastern Catholic churches, the Second Vatican Council exhorted “all those who have received the priesthood in the married state to persevere in their holy vocation and continue to devote their lives fully and generously to the flock entrusted to their care” (Decree on the Ministry and Life of Priests,” No. 16). That exhortation now applies to the more than 100 former Anglican priests and Lutheran ministers who have entered the Catholic Church, been ordained and now serve in the Latin rite. As we face the challenges of the priest shortage, some of the more than 16,000 permanent deacons in the United States, many of them married, who experience a call to priestly ministry might be called to ordination with a similarly adapted discipline. In addition, the views and desires of some of the more than 25,000 priests who have been laicized (and are now either single or married) should also be heard.

Our plea is modest. The bishops of the United States should take greater leadership in openly discussing the priest shortage and its possible remedies. These should not be conversations in which we face a problem only to find every new avenue of solution closed. Rather, they should be exchanges fully open to the possibilities offered by the Spirit.

In March, Cardinal Edward Egan, the newly retired archbishop of New York, said in a candid moment that the topic of married priests “is a perfectly legitimate discussion.” He added, “I think it should be looked at.” The cardinal later nuanced his statement, but the need for a creative re-visioning of priestly life to sustain the eucharistic life of the church in its fullest sense can no longer be delayed.