Skip to main content
Signs Of the TimesMarch 30, 2009 issue

The Complex History of Indulgences 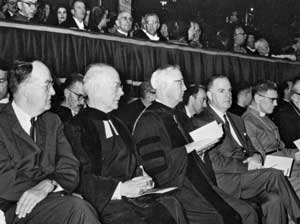 Cardinal Walter Kasper, president of the Pontifical Council for Promoting Christian Unity, called on March 10 for a clarification of the Catholic doctrine on indulgences and at the same time asserted that the church’s teaching on the matter was not an obstacle to ecumenical dialogue. He made his statement in response to criticisms by some Protestant leaders of the recent decree of the Apostolic Penitentiary granting indulgences to those who undertake a pilgrimage during the Pauline Year to the Basilica of Saint Paul Outside the Walls in Rome.

Origins. The remote origin of modern indulgences is the practice of allowing the intercession of those awaiting martyrdom to mitigate ecclesiastical penances imposed on public sinners, which was practiced during the persecutions in the early centuries of the church. During the First Crusade, in 1099, Pope Urban II remitted all ecclesiastical penance for the armed “pilgrims” setting off for the Holy Land. As the doctrine of purgatory evolved, the practice and teaching on indulgences shifted to the shortening of punishments in purgatory for oneself or somebody else in exchange for a good deed done in this life. By the late Middle Ages the practice was rife with abuses and helped to spark, as is well known, Luther’s 95 Theses, which marked the beginning of the Reformation. The Council of Trent took up the matter in a late, short and hastily devised decree that reaffirmed the medieval teaching but condemned abuses.

Vatican II. Indulgences came up again at the Second Vatican Council. Before the council began, a number of bishops asked that the council clarify the teaching and practice. As it turned out, these requests did not make their way into any of the initial drafts of the council documents. In July 1963, however, the newly elected Pope Paul VI asked Cardinal Fernando Cento to form a commission of council fathers and advisors to study the question. As the council was drawing to a close in November 1965, time became available for “new business.” The pope therefore asked the national episcopal conferences to study the document on indulgences produced by the commission and to report their assessment to the council.

The first prelate to speak on the matter in Saint Peter’s Basilica was the Melkite patriarch Maximos IV Saigh. After asserting that there was no continuity between the practice of the early church and the medieval doctrine and practice of indulgences, he went on to say: “The theological arguments that try to justify the late introduction of indulgences into the West constitute, in our opinion, a collection of deductions in which every conclusion goes beyond the evidence.” Most of the reports that followed the next day were also negative. When the time for discussion had elapsed, the episcopal conferences had not yet seen all the submitted written reports, many of which echoed the criticism being heard during discussions in the basilica. The reports from Dahomey (now Benin), Japan and Laos were the most radical, calling for the complete abolition of indulgences. The matter went no further in the council.

On Jan. 1, 1967, Paul VI issued the apostolic constitution Indulgentiarum Doctrina, a long instruction that was a modest reworking of the medieval teaching on indulgences. It ended with 22 norms on the doctrine and some relatively modest revisions of the practice. The definition of indulgences the pope gave is quoted verbatim in the Catechism of the Catholic Church: “An indulgence is a remission before God of the temporal punishment due to sins whose guilt has already been forgiven” (No. 1471).