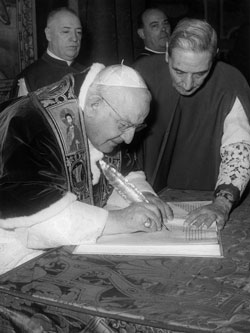 On the fortieth anniversary of the opening of Vatican II, two distinguished Jesuit theologians looked back on the council and reflected on what really happened. John W. O'Malley argues in "The Style of Vatican II" that "Vatican II cannot be interpreted in a minimal sense. Vatican II is in need of further implementation especially in its greatest achievement, a redefinition of the way the church operates, does business."

Cardinal Dulles took a different tack in "Vatican II: Myth and Reality." In a list of common misinterpretations of the Councl, ne hotes the view that "God continues to reveal himself in secular experience through the signs of the times, which therefore provide criteria for interpreting the Gospel." In fact Vatican II taught that "revelation became complete in Jesus Christ and that no further public revelation is to be expected before the end of time, when Christ returns in glory."

Read "The Style of Vatican II."

Cardinal Avery Dulles, S.J., was the McGinley Professor of Religion and Society at Fordham University in New York City from 1988 until his death in 2008. He was the author of 27 books and over 800 articles and reviews.