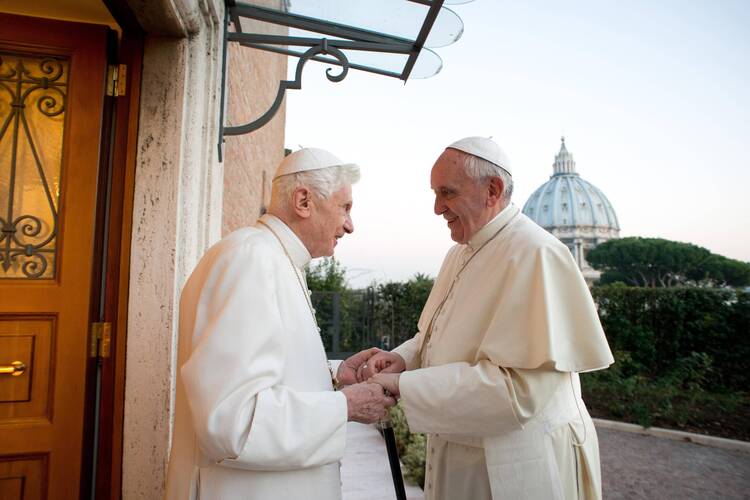 Catholics in the United States are offering prayers and remembrances of former Pope Benedict XVI, whose death at age 95 the Vatican announced on Dec. 31, recalling his presence at the Second Vatican Council, his leadership as pope and his historic decision to step down from the papacy nearly 10 years ago.

“A superb theologian who lent his talents as a peritus [theological expert] at the Second Vatican Council, he continued throughout his long life to be an effective teacher of the faith,” Archbishop Timothy Broglio, president of the U.S. Conference of Catholic Bishops, said in a statement. “As a priest, university professor and theologian, archbishop, and cardinal, his voice in deepening an authentic understanding led all of us to a more profound love of truth and the mystery of God.”

Joe Biden on Benedict XVI: "He will be remembered as a renowned theologian, with a lifetime of devotion to the church, guided by his principles and faith."

Cardinal Sean O’Malley praised Benedict’s “fidelity to maintaining the truth and clarity of the Catholic faith, cultivating ecumenical and interfaith dialogue and reaching out to inspire the next generation of Catholics have been great gifts to us all.” The Boston archbishop, whom Benedict made a cardinal in 2006, recalled accompanying the former pope during his 2008 visit to Washington to a meeting with survivors of sex abuse by priests.

“He was then, and at all times remained, committed to the church supporting their journey towards healing and doing all that was possible to ensure the protection of children, young people, and vulnerable adults,” Cardinal O’Malley said in a statement, adding, “I will miss Pope Benedict.”

In New York, Cardinal Timothy Dolan said in a statement that he has asked parishes in the archdiocese “to offer a Mass for the Good Lord’s mercy upon [Benedict’s] gracious soul and in thanksgiving for his vocation as Successor of St. Peter.”

“The human family grieves the passing of this erudite, wise, and holy man, who spoke the truth with love,” Cardinal Dolan said. “The family of the church especially mourns his death, while grateful for the gift he was of a good shepherd and Holy Father.”

Cardinal Dolan: “The human family grieves the passing of this erudite, wise, and holy man, who spoke the truth with love."

“As the last pope who attended the Second Vatican Council, he has served as a bridge to the future, reminding us all that the reform and renewal of the church is ongoing,” Cardinal Cupich said.

Cardinal Wilton Gregory, the archbishop of Washington, praised Benedict in a statement for living "a distinguished and generous life in service to Catholicism and humanity." Benedict’s life, he said, “included not only his ecclesial contributions, but his impassioned pleas for world peace, human understanding and global solidarity.”

Ambassador Joe Donnelly, the U.S. emissary to the Holy See, recalled Benedict’s “humility and courage” as he stepped onto the world stage following his election.

“Pope Emeritus Benedict ascended the papacy with great courage and conviction as the world mourned the death of Pope Saint John Paul II,” Mr. Donnelly said in a statement.

U.S. President Joe Biden noted in a statement that “I had the privilege of spending time with Pope Benedict at the Vatican in 2011 and will always remember his generosity and welcome as well as our meaningful conversation. He will be remembered as a renowned theologian, with a lifetime of devotion to the church, guided by his principles and faith. As he remarked during his 2008 visit to the White House, ‘the need for global solidarity is as urgent as ever, if all people are to live in a way worthy of their dignity.’ May his focus on the ministry of charity continue to be an inspiration to us all.”

When Benedict stepped down in 2013, he created the modern office of “pope emeritus,” which could reshape the papacy and what is expected of future popes as they age. But his legacy extends beyond that single decision, drawing praise from some Catholic quarters for his embrace of traditional liturgical practices and his outspoken defense of traditional Catholic values.

Bishop Thomas John Paprocki, who heads the Diocese of Springfield, Ill., said in a statement that Benedict’s “steadfast defense of our faith’s teachings and traditions and remaining faithful to them, despite the pressures of the secular world and from inside the church, is the mark of a true leader.” Bishop Robert Barron, head of the popular Word on Fire ministry, called Benedict “one of the most consequential theologians of the 20th and 21st centuries” and said the former pope’s “impact on the Catholic Church will be remembered long after today.”

The politically conservative commentator Sohrab Ahmari wrote in The New York Times that he was drawn to the Catholic Church by Benedict’s writings. Mr. Ahmari said the former pope’s reflections on faith and reason in a controversial 2009 speech about Islam have been vindicated with time and shaped his own faith.

“Gazing through Benedict’s lens, I view Islam, in its painful encounter with modernity, with far greater sympathy and solicitude than I ever did as a nonbeliever,” he wrote.

Other Catholics recalled Benedict’s insistence on adherence to traditional church teachings on sexuality and against women’s ordination, as well as his inability to get a handle on the church’s sprawling sexual abuse scandal.

Kathleen Sprows Cummings, director of the Cushwa Center for the Study of American Catholicism at the University of Notre Dame, said in a statement that Benedict leaves “a complicated legacy.” She pointed to a report from earlier this year that showed Benedict had been implicated in covering up sexual abuse when he was archbishop of Munich from 1977 to 1982.

The former pope will lie in repose at the Vatican on Monday, Jan. 2, giving the faithful an opportunity to pray for him.

“Benedict acknowledged his failure to act decisively at times in confronting sexual abusers, yet anticipated facing the final judgment with confidence and without fear, trusting the Lord to be not only a ‘just judge’ but also ‘the friend and brother who has already suffered for my shortcomings,’” Dr. Cummings said. “History, however, is also a fair-minded judge, and when it comes to culpability in the clergy sexual abuse crisis, one that is far less likely to absolve Benedict than the God of mercy.”

John Allen, the editor in chief of Crux, suggested that Benedict deserved some credit for his response to the sex abuse crisis. “While even his most ardent supporters would concede that Benedict XVI left considerable unfinished business on the abuse scandals, even his most determined critics likewise would have to stipulate that the clean-up nevertheless began on his watch,” Mr. Allen wrote in Crux today. “It had been then-Cardinal Ratzinger who defended the American ‘zero tolerance’ policy in 2002 when it ran into stiff opposition from other quarters in the Vatican. As pope, Benedict wrote expedited procedures for laicizing abuser priests into universal church law, at one point authorizing the expulsion of more than 400 accused abusers from the priesthood in a single year.”

Meanwhile, New Ways Ministry, a group that ministers to L.G.B.T. Catholics, said in a statement that Benedict did not seek to understand the lives of gay and lesbian Catholics, resulting in statements and documents that caused “grave pastoral harm.”

“While clearly a man of faith seeking to act with good intentions, Pope Benedict's resistance to engaging the lives, love, and faith of actual LGBTQ+ human beings means he will be remembered as a church leader who did not listen pastorally to those the Church serves,” the group said.

An organization that advocates ordaining women to the priesthood pointed to Benedict’s “profound example of humility and willingness to overturn tradition” in his decision to step down from the papacy. But Kate McElwee, executive director of the Women’s Ordination Conference, also criticized the former pope’s “relentless pursuit to stifle the movement for women’s ordination,” which she said “revealed a man unwilling or unable to engage with the urgent needs of the church today.”

John Gehring, the program director for the progressive advocacy group Faith in Public Life, said future Catholics will need to evaluate Benedict’s impact in the church, describing his legacy “as complicated as the church he led.”

“A brilliant theologian who at times silenced theologians. A doctrinal guardian who wrote an encyclical about love. A traditionalist who broke with centuries of tradition to resign,” Mr. Gehring tweeted. “The historians can take it from there.”

The former pope will lie in repose at the Vatican on Monday, Jan. 2, giving the faithful an opportunity to pray for him, church leaders announced. Pope Francis will preside at Benedict’s funeral three days later.