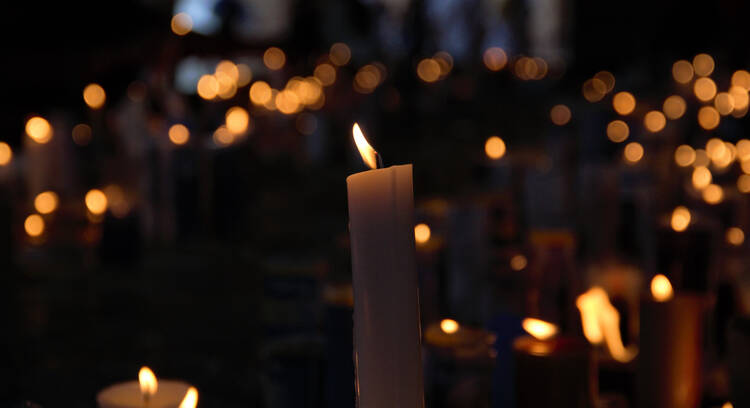 Days before Christmas may not seem like the most obvious time for a parish to plan a quiet evening reflecting on finding God in the midst of life’s darker moments. But even amid the last-minute shopping excursions and gatherings of families and friends, that is exactly what those gathered at Old St. Mary’s Catholic Church in Chicago’s Loop neighborhood will do Wednesday evening. Coinciding with the winter solstice, the Longest Night is a prayer service aimed at offering comfort to people whose experiences with loss, mental health or even just the holiday blues may cause them to struggle with the in-your-face, over-the-top joy sometimes demanded during the season.

December can be a time when there is “lots and lots of expectation, which can also translate into lots of disappointment,” Kate Williams, a member of the parish council who helped organize the parish’s first Longest Night service last year, told America.

Ms. Williams said that coming out of the first year of the pandemic presented an opportunity to reflect on loss during last year’s holiday season.

“There was just so much loss and grief and unpacking that needed to be done because of what we had just been through collectively,” she said.

December can be a time when there is “lots and lots of expectation, which can also translate into lots of disappointment.”

Ms. Williams said she had found hope and support in the parish community for her own struggles with mental health and hoped a service dedicated to helping people who experience similar challenges could be comforting.

“The most important thing we can do for each other as a faith community is just practice that art of accompaniment,” Ms. Williams said. She said that while it is important “to be with people in all seasons of life,” Christmastime “can often feel like one of the most out-of-sync seasons, especially for people who are struggling.”

People at this time of year, Ms. Williams said, are “carrying a lot of burdens with them. And it feels almost like salt in a wound when the air around you in so many circles in which you’re present is loudly blasting the opposite kind of message, about rejoicing and happiness and family and togetherness—and that's just not true for [you].”

Sometimes known as “Blue Christmas” services, they have been popular in some Protestant communities since at least the 1990s, but there seems to be growing interest in Catholic spaces as well.

The Rev. Ronald Knott held his first Blue Christmas Mass in 2011, when he was a campus minister at Bellarmine University in Louisville, Ky.

Sometimes known as “Blue Christmas” services, they have been popular in some Protestant communities since at least the 1990s, but there seems to be growing interest in Catholic spaces as well.

“I kept hearing people talk about how they hated to go to Mass on Christmas because they had experienced a loss of children or spouses or family members, from drug addiction to heart attacks to cancer, you name it,” Father Knott said.

“A lot of times at Christmas Masses, families are all laughing when they come in, and they’ve got the kids and the grandkids and they’re singing ‘Joy to the World’ with trumpets,” Father Knott said, “and it just grates on some people who have been through loss.”

“The last thing they wanted to do was to have joy shoved down their throats,” he added.

With space in the campus chapel and access to musicians, Father Knott decided that he would host a more somber Mass on Christmas Eve. The homily focused on the sometimes-overlooked trials of that first Christmas as a way to demonstrate that God understands challenges and grief.

“I kept hearing people talk about how they hated to go to Mass on Christmas because they had experienced a loss of children or spouses or family members.”

“The message was one of hope,” Father Knott said. “Mary and Joseph are away from home. They were in a crisis situation and so on…. It wasn’t depressing. It was soothing.”

The first year, Father Knott expected that the chapel’s capacity of about 175 people would offer more than enough room for worshippers. But more than 300 showed up. Eventually, he moved the service to a nearby parish, and he was struck by how many people traveled from across the archdiocese to attend the Mass. Father Knott hosted the service each Christmas through 2019, pausing because of Covid-19 for the last two years. He hopes to host another Mass next Christmas.

“It’s a much bigger need in the church than I think a lot of people are aware of,” Father Knott said. “They might know one or two people are grieving, but they come out of the woodwork.”

While there is not much evidence to suggest that depression necessarily increases during the holiday, some studies show that people feel more anxious and stressed at this time of year. The Mayo Clinic suggests that people acknowledge their feelings, reach out to a friend or family member if they’re feeling isolated and step away from the demands of the holiday season to take a breather.

“It’s appropriate to take space and time to acknowledge that this is a part of our life, too, that it's not happy and joyful all the time.”

A chance to step away is what the organizers hope to offer in Chicago, especially for individuals who might not always feel welcome at Mass.

“How do we build bridges for people to come who are often overlooked and who need that connection to faith?” Brad Schoeberle, C.S.P., the pastor of the Paulist-run Old St. Mary’s, told America.

While Blue Christmas or Longest Night services vary community to community, they often share common elements, including silence, reflective music and prayer. At Old St. Mary’s, participants will focus on the illuminated advent wreath, hear passages from Scripture and poems, and listen to four brief reflections.

“The winter solstice is the time when we experience the most darkness,” Ms. Williams said. “It’s appropriate to take space and time to acknowledge that this is a part of our life, too, that it's not happy and joyful all the time.”

“And even when the rest of the world doesn’t seem to have capacity for that, we know that God does and so we try to acknowledge that together,” she said.