‘I haven’t had a full night’s sleep since’: Priest who buried 8 children reflects on 10th anniversary of Sandy Hook shooting 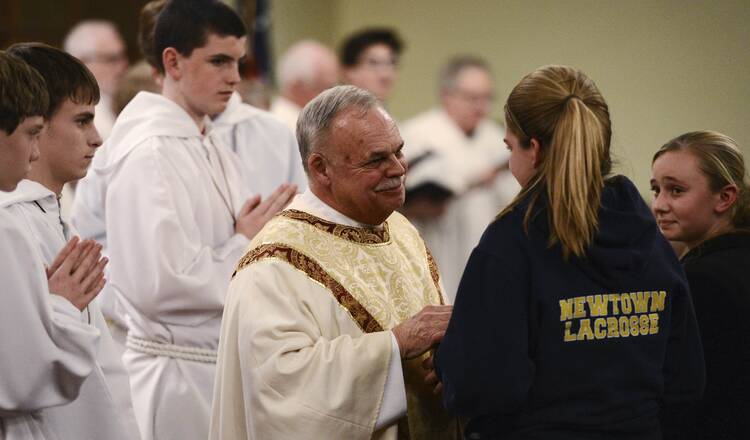 Msgr. Robert Weiss speaks to young women inside St. Rose of Lima Church during a vigil service Dec. 14, 2012, in Newtown, Conn. At least eight of the 20 children killed in the shooting rampage at nearby Sandy Hook Elementary were from St. Rose, a parish of 3,200 families and the only Catholic church in Newtown. (CNS photo/Andrew Gombert, pool via Reuters)

Ten years ago, Newtown, Connecticut, was catapulted into the national spotlight when a young man shot and killed 26 people Dec. 14 at Sandy Hook Elementary School.

Twenty of the victims were children in first grade; the other six were adult staff members. Many were members of St. Rose of Lima Parish, where Msgr. Robert Weiss has been the pastor since 1999.

Reflecting on the horror and the events of the intervening years, Msgr. Weiss said: “Gratitude sustains me. I pray a lot and try to keep myself in the Lord’s hands.”

The priest presided at funerals for eight of the children over a five-day period in December 2012, as well as wakes and burials. He also said he continues to experience post-traumatic stress for which he has been treated.

Twenty of the victims were children in first grade; the other six were adult staff members. Many were members of St. Rose of Lima Parish, where Msgr. Robert Weiss has been the pastor since 1999.

“I haven’t had a full night’s sleep since then. It’s been a difficult experience for me and for others, too,” he told Catholic News Service in a telephone interview Nov. 21.

In the immediate aftermath of the shooting, there was an outpouring of generosity from all over the world. “We were overwhelmed with things people sent us, from ornaments and prayer chains to cards and donations,” Msgr. Weiss said.

Parish staff members were on site 24 hours a day to answer calls and emails and Msgr. Weiss restricted volunteers to two-hour shifts opening the mail because it was such an emotional experience.

There was also a credible threat to the parish two days after the shooting, which was met by a SWAT team and required an evacuation of the church. Later, conspiracy theorist Alex Jones and his followers harassed victims’ families for years, claiming that the shooting never happened and was staged by actors as part of a government plot to build support for gun control.

“I haven’t had a full night’s sleep since then. It’s been a difficult experience for me and for others, too.”

Msgr. Weiss was also targeted by Jones as a liar and unfaithful priest who lacked credibility. Wolfgang Halbig, an associate of Jones, entered the parish school under false pretenses with four photographers and was removed from the campus by police. Ultimately, Jones was ordered by two courts to pay millions of dollars to families who suffered from his lies.

Healing is a recurring theme for Msgr. Weiss. He said the community took its lead early from the families of the victims and supported foundations, programs and scholarships. “It facilitated their healing and had an impact on the community. We saw that good could come from bad and it bonded us together,” he said.

Help came from many places, including Yale University in New Haven, Connecticut, which provided free counseling for one year and Madison Square Garden, the New York City sports arena, which renovated the parish gymnasium.

“As a small community, we did not have the resources, but people here did not forget the goodness that was shown to us,” the priest said.

Parish staff members were on site 24 hours a day to answer calls and emails.

One of the early letters to the parish came from Msgr. Basil O’Sullivan in Dunblane, Scotland, where 16 school children and one teacher were killed by a lone gunman in 1996. The two pastors forged a friendship and Msgr. O’Sullivan visited St. Rose of Lima on the first anniversary of the Sandy Hook shooting.

“It was so healing. He reminded us that darkness remains for awhile, but the light will come,” Msgr. Weiss said.

The connection between the two pastors was explored in a Netflix documentary, “Lessons from a School Shooting: Notes from Dunblane.”

Msgr. Weiss said he and his parishioners use their sad experience to help others. When there are other school shootings, such as in Uvalde, Texas, Msgr. Weiss mails a poignant letter of empathy and encouragement to the parish. He offers to talk or listen. And his parishioners respond with generosity, as well.

“We’ve learned from our own experience not to overreach,” he said.

In the letter to the pastor and parishioners at Sacred Heart Church in Uvalde, Msgr. Weiss wrote: “This is a tragedy that will put your community before the world, but do not let it define the community you are. You are bonded together in faith, family and friendship, and that is what will enable you, as it has us, to stand together in strength and hope and to work toward the healing you need. Know that you are not alone and that we stand in solidarity with you. Know that in time there will be abundant blessings that will come from this tragedy.”

He said counselors advised the parish to develop ministries for men, women and youth. “They are still going strong and I’ve watched miracles happen through these ministries,” he said. He also noted that there is a bond between older and younger parishioners and when men arrive early for Mass, “they talk and hug and exchange football back pats in the vestibule.”

Msgr. Weiss is disappointed that there has been no national progress on gun violence, mental health and domestic violence since the Sandy Hook shooting.

The parish youth group is also particularly active, he said, taking part in retreats going to confession and being “comfortable being in the presence of the Eucharist.”

He said he goes to the church on Sunday night for adoration where there is “one light over the monstrance” and the young people are “sitting on the floor. It’s an oasis from their lives and they need the time.”

The priest said the Newtown community has changed in 10 years. Many of the affected families left town. Some experienced suicide, divorce, remarriage and miscarriages. New people moved in and the leadership of religious, political and civic organizations has turned over.

Msgr. Weiss is one of the few clergy from 2012 still in place. At 76, he is eligible to retire, but asked to stay for the 10th anniversary. He plans to stay in place through the 50th anniversary of his ordination in 2023.

He is disappointed that there has been no national progress on gun violence, mental health and domestic violence since the Sandy Hook shooting. The local tragedy did not change the world, as he hoped. Nonetheless, Msgr. Weiss said priorities have shifted in many families, partly as a result of COVID-19.

“Fathers are much more invested in their families and there is more priority on spending time as a family,” he said. Anecdotally, he added: “ I haven’t had a baptism in the last three years where the father did not hold the child.”

St. Rose of Lima recently dedicated a simple parish monument to the shooting victims and will hold a memorial concert December 12 and celebrate a Mass of Remembrance December 14.

Msgr. Weiss said this is likely to be the last anniversary marked with a big event.

“The psychologists told us 10 years is a significant mark. People’s emotions change. After this, we’ll have an annual Mass of Remembrance,” he said.

But people will not forget. As he put it: “Very few people who are still here can mention the shooting without tearing up.”

Beth Griffin - Catholic News Service
Show Comments ()
Join the conversation: Login or create an account
Before you can comment, you need to update your profile to include your first and last name, as required in our comments policy. Then reload this page and you'll be set up for commenting. Update your profile