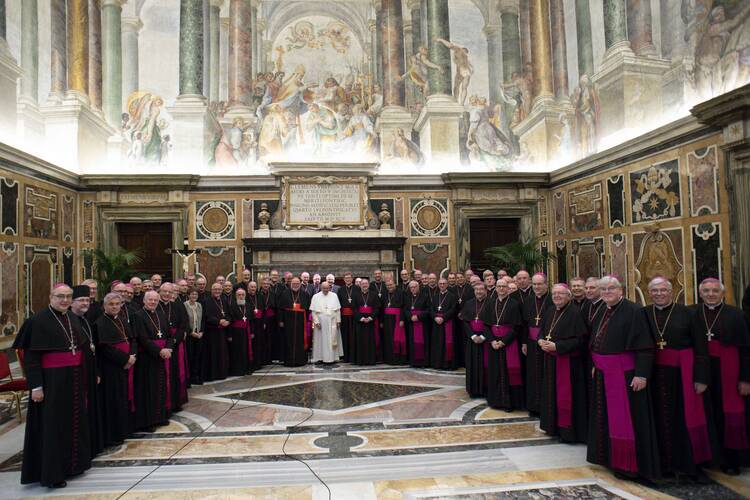 Pope Francis and the bishops of Germany pose for a photo after a meeting in the Clementine Hall of the Apostolic Palace Nov. 17, 2022, as part of the bishops' "ad limina" visits to the Vatican. (CNS photo/Vatican Media)

VATICAN CITY (CNS) -- The German bishops’ meeting with officials of the Roman Curia was not a “showdown,” but it did make clear the Vatican’s strong concerns about Germany’s Synodal Path, especially regarding its support for official ministries for women and for a change in church teaching about homosexuality, said the president of the bishops’ conference.

Coming at the end of the bishops’ weeklong “ad limina” visits to Rome, the meeting Nov. 18 with the heads of Vatican offices was “a serious test of synodality,” Bishop Georg Bätzing told reporters the next day.

In that meeting, “it was important to me to make it clear that the uncovering of abuse and structures that facilitated abuse in the church have so shattered trust and called into question the authority of the bishops to such a degree that new paths are necessary in order to confront the crisis in the church,” he said.

The German bishops’ meeting with officials of the Roman Curia was not a “showdown,” but it did make clear the Vatican’s strong concerns about Germany’s Synodal Path.

The German bishops promise to reflect on what was said and heard, he said, but that reflection and the continuing dialogue with the Curia must involve those who “make up the largest part of the people of God: the laity.”

“We are Catholics, and we will remain Catholics, but we want to be Catholics in a different way,” Bishop Bätzing said. Claims that the German church is moving toward a schism “are said from outside and meant to intimidate us.”

A joint statement published late Nov. 18 by the bishops and the Vatican said the meeting with Curia officials was chaired by Cardinal Pietro Parolin, Vatican secretary of state. Formal presentations were made by Cardinal Marc Ouellet, prefect of the Dicastery for Bishops, and Cardinal Luis Ladaria, prefect of the Dicastery for the Doctrine of the Faith, “who frankly and clearly entered into the concerns and reservations regarding the methodology, content and proposals of the Synodal Path.”

“In the perspective of open and fraternal sharing,” the statement said, “some proposals were put forward, such as that of applying a moratorium to the German Synodal Path, which was not accepted, and that of favoring an additional reflection and mutual listening in light of the perplexities that have emerged.”

“We are Catholics, and we will remain Catholics, but we want to be Catholics in a different way,” Bishop Bätzing said.

Bishop Bätzing told reporters Cardinal Ouellet said he had accepted the role of the “bad guy” and proposed the moratorium.

“He said he was very worried, very worried that the synod in Germany could be a forest fire that spreads everywhere,” the bishop said.

The joint statement also said in the contributions of the Vatican officials “the importance and also the urgency of defining and deepening some of the issues highlighted emerged, for example, those referring to church structures, sacred ministry and access to it, Christian anthropology, etc.”

The three apparently refer to the Synodal Path’s: approval of a permanent “synodal council” of bishops and laypeople “to advise on major developments in the church and society”; its call for women to be admitted to the diaconate and for a consideration of allowing women priests; and its call for a revision of church teaching on homosexuality and its approval of blessings for persons in committed same-sex relationships.

Claims that the German church is moving toward a schism “are said from outside and meant to intimidate us,” Bishop Bätzing said.

At the news conference, Bishop Bätzing told reporters the role of women in the church and the possibility of expanding women’s ministries “is the most urgent question and the one that separates us most” from the Curia officials. “Women have put up with so much and are getting impatient. Many younger women say that a church that denies all of this cannot be my church.”

As for allowing the blessing of gay couples, the bishop said members of the Synodal Assembly are continuing their discussion. “But for me, as a bishop, these blessings for people who ask God’s blessing for their committed relationship, I would not take that away from them.”

In the wake of the clerical abuse scandal and with the release of a major study of its causes, the German bishops’ conference and the Central Committee of German Catholics launched the Synodal Path in 2019. The process began with forums to discuss issues in the four areas the study identified as containing the “systemic causes” of sexual abuse and its cover-up: the exercise of power in the church; sexual morality; priestly existence; and the role of women in the church.

At the news conference, Bishop Bätzing told reporters the bishops and the central committee are committed to concluding the Synodal Path with a fifth assembly in March. “A moratorium would mean stopping, it would mean not continuing work on these themes and texts. Here it was very clear, and I’m glad it was in the communique, that this is not an option.”

The role of women in the church and the possibility of expanding women’s ministries “is the most urgent question and the one that separates us most” from the Curia officials, Bishop Bätzing told reporters.

The Synodal Assembly meets to pray and discuss proposed documents setting out a theological approach to each of the four areas of study and separate documents making concrete suggestions for ways to address the concerns. After a first reading and debate on the documents, they are amended. After a second reading, members of the assembly vote on them. To pass, the documents must be approved by two-thirds of the German bishops and two-thirds of the laity, priests and religious in the assembly.

The recommendations in some approved texts can be adopted without approval from Rome, but others must be referred to the Vatican before implementation.

In his introduction to the meeting with the Curia, in a text released by the bishops’ conference, Bishop Bätzing told the Vatican officials that “the issues we are dealing with in the four forums and at the synodal assemblies are also being discussed in other parts of the church,” as is clear from the contributions national bishops’ conferences have sent in as part of the process preparing for the world Synod of Bishops.

As for allowing the blessing of gay couples, the bishop said members of the Synodal Assembly are continuing their discussion.

While the Synodal Path was mentioned Nov. 17 during the two-hour meeting the 63 bishops had with Pope Francis, Bishop Bätzing said it was not treated in depth because the pope was scheduled to attend the meeting the next day with the heads of the Curia offices.

“It was irritating at first” that Pope Francis was not there, the bishop said, and no one from the Vatican explained his absence. “But now I would say the pope is a shrewd Jesuit and he allowed us to have this debate among brothers.”

The bishops’ communication office said the meeting with Pope Francis was an open forum “during which the bishops were able to raise their questions and issues, and the pope responded.”

While “aspects of the Synodal Path of the church in Germany and the worldwide synodal process” came up, the office said, the discussion also included providing pastoral care to people in changing times, understanding priestly and episcopal ministry, the involvement of laypeople in the church and the challenge of evangelization in an increasingly secularized culture.

“Political responsibility, social cohesion and prospects for peace in the face of global and regional conflicts” also were discussed, the bishops’ conference said.