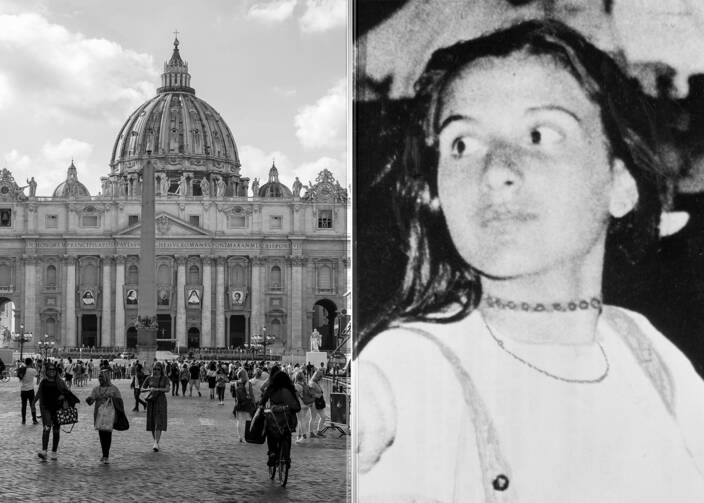 from left to right: External view of St. Peter's Basilica, Rome (Ágatha Depiné/Unsplash). Emanuela Orlandi is pictured in a photo that was distributed after her disappearance in 1983 (CNS photo). Composite: America Media

A new true-crime documentary series on Netflix, “Vatican Girl,” tells the story of the 1983 disappearance of Emanuela Orlandi, a 15-year-old girl who is still the only Vatican citizen considered missing.

The series examines the various testimonies by people involved with or claiming to be involved with the case, with the notable exception of any Vatican officials. After a montage where one person after another claims that every lead in the investigation involves the Vatican in some way and urges the institution to reveal any information it has, the final screen notes: “The Vatican declined to be interviewed for this series.”

Here is what you need to know about the case and the revelations made in the four-part documentary series.

Emanuela Orlandi was a 15-year-old girl who lived in an apartment in Vatican City with her family, some of whom had been employed by the Vatican and worked for popes for over a century. Her family are among the few non-clerics granted official Vatican citizenship.

Orlandi’s family received a series of mysterious phone calls claiming she had been kidnapped for ransom and would be freed if Mehmet Ali Agca were released from prison.

On June 22, 1983, Emanuela left home for a flute lesson in the center of Rome. She called home afterward to say she had been recruited to sell Avon beauty products after the lesson. She never returned.

Orlandi was allegedly last seen getting into a green BMW.

In the months following her disappearance, Orlandi’s family received a series of mysterious phone calls claiming she had been kidnapped for ransom and would be freed if Mehmet Ali Agca, the man who shot Pope John Paul II in 1981, were released from prison. The calls and subsequent testimonies from various people who claim to have been involved with the case have led to several theories around the motives for her disappearance; the two most popular being that she was either kidnapped by an international terrorist group linked to Agca or that the Italian Mafia had kidnapped her in order to blackmail the Vatican for money after the collapse of Banco Ambrosiano in 1982, the year prior to Orlandi’s disappearance. The Vatican Bank, officially known as the Institute for the Works of Religion, was Banco Ambrosiano’s main shareholder and was accused of using Banco Ambrosiano to funnel money to the Polish trade union Solidarity, contributing to the downfall of the Soviet Union.

There is a compelling argument made that if what Orlandi’s friend says is true and was known by her captors, any proof could have been leveraged to blackmail the Vatican.

The major twist in “Vatican Girl,” for those who have followed the almost-40-year-long mystery case, is an interview featured in the last episode of the series. A woman claiming to have been a close friend of the missing girl, who chooses to remain anonymous, claims that the week before she disappeared, Orlandi had confided to her that “someone close to the pope” had been “bothering” her while she was walking in the Vatican Gardens. Orlandi’s friend said she had interpreted her friend’s confession to mean this person had made sexual advances toward Orlandi but did not elaborate on what she thinks happened or whether her friend had previously reported such behavior to her.

In another interview, Emanuela’s brother, Pietro, says that Emanuela would not have told her parents if “a cardinal” were making sexual advances, because it would have jeopardized their father’s job as a messenger at the Vatican and possibly forced the family to move out of their Vatican apartment. It is unclear whether Pietro is speaking purely hypothetically when he says “cardinal” in his interview or whether he thinks a cardinal actually made such advances.

The documentary editors juxtapose these comments with photos of Emanuela as a young child and headlines about priests sexually abusing children, which seem to suggest to the viewer that the teenage girl could have been sexually abused from a young age, but none of the interviews that are included in the show make that claim. There is a compelling argument made that if what Orlandi’s friend says is true and was known by her captors—that someone, possibly a cardinal close to the pope, made advances on a minor in 1983, well before the church’s reckoning with sexual abuse—any proof could have been leveraged to blackmail the Vatican.

To this day, the captors’ motives and Orlandi’s whereabouts remain unknown. A 1998 document, published in 2016 as part of the VatiLeaks scandal, contains Vatican financial records relating to Miss Orlandi's lodging at a hostel for girls run by the Scalabrinian Missionaries, a religious institute of brothers and priests, in London. The last item in the document lists a final expense in July 1997 for “general activities and transfer to the Vatican City State with relative final paperwork.” A lawyer employed by Orlandi’s brother has interpreted this to mean that Orlandi’s body was returned to Vatican City without her family’s knowledge, although no remains matching hers have ever been declared as found, even after a tip-off led to the 2019 excavation of two graves in the Vatican’s Teutonic Cemetery and the discovery of “thousands of bones”—mostly fragments—in two ossuaries beneath the nearby Teutonic College.

The financial records leaked in 2016 appear to show that officials in the Vatican’s treasury office, the Administration of the Patrimony of the Apostolic See, knew where Orlandi was until at least summer 1997, but the Vatican has never confirmed the truth of the information contained in the leaked document.