Giorgia Meloni is a Christian and a right-wing nationalist. How will she relate to Pope Francis? 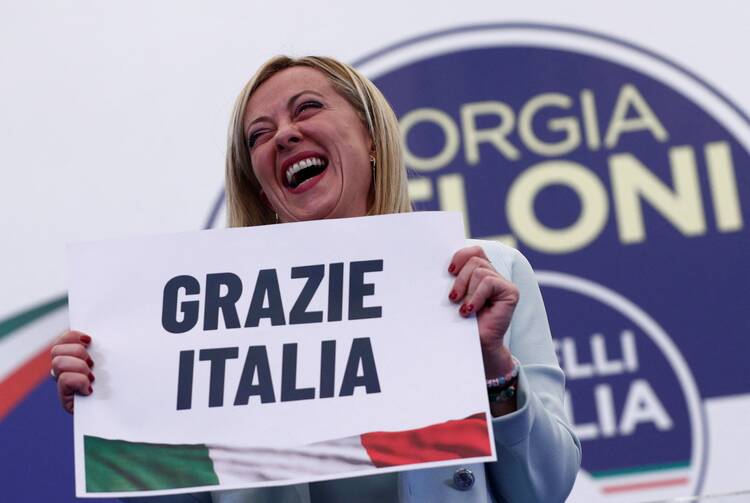 Giorgia Meloni, leader of Brothers of Italy, holds a sign at the party's election night headquarters in Rome Sept. 26, 2022. Italian voters handed a victory to a coalition of center-right parties and set the stage for Meloni to become the next prime minister. (CNS photo/Guglielmo Mangiapane, Reuters)

Pope Francis and Giorgia Meloni have never met, but they are destined to do so after she becomes Italy’s first female prime minister and leader of the country’s most far-right-wing government since World War II later this month.

There is much speculation about how they will relate to each other. Their positions on the migrant question appear to be diametrically opposed. Her nationalist identity politics and her understanding of Christianity appears to exclude rather than include and communicate a very different vision to that of Francis. At the same time, she, like the pope, is very concerned about the low birthrate in Italy and wants to increase that. They both see the need to create jobs so that young, qualified people do not have to leave the country.

There is much speculation about how Pope Francis and Giorgia Meloni will relate to each other. Their positions on the migrant question appear to be diametrically opposed.

Given all this, Vatican sources contacted by America (who wish to remain anonymous because they are not authorized to speak on the subject) believe that the 85-year-old pope and the 45-year-old soon-to-be prime minister of Italy could in fact develop a constructive relationship.

Ms. Meloni has spoken little since she won the election and instead has emphasized that since she now has “great responsibility,” she needs to speak carefully, an attitude appreciated in the Vatican, sources told America.

“The Vatican does not seek to influence or interfere in Italian politics. Its doors are always open to all, from the president of France, Emmanuel Macron, to the Hungarian prime minister, Viktor Orban, and they will be open to Giorgia Meloni,” one senior Vatican official said.

He added, “Meloni is a person who has an idea of Christianity that is ‘sui generis,’ and I believe that we must not judge nor jump to conclusions before seeing how she moves.”

In her autobiography, Io sono Giorgia (“I am Giorgia”), Ms. Meloni wrote about her life and her faith.

“Meloni is a person who has an idea of Christianity that is ‘sui generis,’ and I believe that we must not judge nor jump to conclusions before seeing how she moves.”

In the section of the book entitled “I am Christian,” she begins by saying, “I owe everything to my mother.” She reveals that her mother, Anna, gave birth to her at the age of 23, resisting pressures to have an abortion. She describes her grandmother Maria as “very devout” and recalls how she and Arianna, her older sister, accompanied their grandmother to Mass every Saturday evening. She says her father, an atheist who left the family when she was very young, objected to having the two girls baptized, but Father Guido, the parish priest of the church they attended, convinced her mother to have them baptized when she was 6 years old.

The “saintly” Father Guido took great care of his flock and saved many from drugs and bad companions, she recalls. “It is thanks to him that I began to come close to God.” Since then, she says, “my dialogue with God has never ceased.” She and her sister served as altar girls. She developed a great devotion to her guardian angel, “a guide, a counselor and one’s best friend,” whom she sometimes identifies with conscience. She is not married but has a six-year-old daughter, Ginevra, with her partner, a journalist who works in the television world; she reveals that every night she recites a prayer to the guardian angel with her daughter as she puts her to sleep.

Ms. Meloni describes St. John Paul II as “another very great man” (like Father Guido), and “the greatest pope of the modern era.” He had a considerable impact on her because “with simplicity and his powerful example, he brought me close to God.” She met him four times, in her political role as city councilor. Her first encounter with him, at the age of 21, was “electrifying,” she writes. She was profoundly touched by how he “heroically” endured suffering in his last years and went to pay her respects when he died in 2005. She wept on that occasion.

Meloni reveals: “I admit that I have not always understood Pope Francis.”

She reveals: “I have followed every pope, but not with the same enthusiasm. It may also be a question of age, and the awareness that comes with it, but although being Catholic and having never allowed myself to criticize a pope, I admit that I have not always understood Pope Francis. At times I have felt like a lost sheep, and I hope that one day I will have the privilege of being able to speak with him, because I am certain that his big eyes and his straight talk will be able to give meaning to [make sense of] what I do not understand.”

In a significant paragraph from her book, she declares, “I have never ceased to believe in God. But the intimate dimension is so very personal that it cannot and must not be used as a paradigm of a collective political movement or indeed of a nation. My faith in God is imperfect, doubtful, painful, but it is mine and only mine.” She adds: “Thanks to God I have chosen to be a decent person, convinced that He sees and recognizes—also in this life and not only in the next—those who choose to be on his side. And it is thanks to Him that I have understood that each of us has a mission in life.”

In the light of all this, it is interesting to hear some of what she said on the campaign trail. Much of it was summed up in a speech she gave at a rally in Piazza San Giovanni, Rome, in October of 2019: “I am Giorgia. I am a woman. I am a mother. I am a Christian. We will defend God, the fatherland and the family from Islamization.”

She brought the crowd to its feet when she shouted, “Yes to sexual identity, no to the ideology of gender! Yes to the universality of the cross, no to Islamic violence!”

Again, speaking in Marbella, Spain, last June, at a rally in favor of Vox, the extreme right-wing Spanish political party, Ms. Meloni identified herself as “a woman, a mother, an Italian and Christian.” She brought the crowd to its feet when she shouted, “Yes to the natural family, no to LGBT lobbies! Yes to sexual identity, no to the ideology of gender! Yes to the universality of the cross, no to Islamic violence! Yes to secure frontiers, no to massive migration!”

She takes pride in the fact that she is not only Italian but also European. Up to now the allies she has courted in the 27 member states of the European Union appear to be on the right or the far right of the political spectrum, chief among them the prime minister of Hungary, Viktor Orban. She hopes with their aid, and that of other right-wing parties, to bring about change in the European Union to the advantage of the sovereign national states over the union’s central government in Brussels.

Ms. Meloni comes to power as the war in Ukraine rages, but she is adamant in affirming Italy’s total support for Ukraine against Russian aggression, together with NATO and the European Union. She took this stance on the eve of becoming prime minister, even though the leaders of the two other parties that form her center-right coalition, the League of Matteo Salvini and the Forward Italy party of the media mogul Silvio Berlusconi, have very close relations to the Russian president Vladimir Putin.

Ms. Meloni, who was minister for youth in Berlusconi’s government in 2008 and will now lead the 70th Italian government since 1946, may in fact encounter more problems in the immediate future with her political allies in the coalition than with the pope or the Catholic Church.

For his part, Pope Francis has left Italian politics to the Italian bishops’ conference, and its president, Cardinal Matteo Zuppi, who is very close to Francis, knows her. The cardinal expressed his openness to her and said he is not concerned that she is leader of a post-fascist movement, Brothers of Italy, nor does he fear the return of fascism in Italy. Speaking to journalists, he expressed his personal respect for her and said he recognizes that her role as prime minister is “particularly difficult” at this moment in history given the war in Ukraine and the energy crisis linked to it, as well as economic problems as the country emerges from the pandemic.

Cardinal Zuppi hopes the new government will work for “the common good” not for “particular interests” and said he will monitor closely how it addresses the problems of “poverty, inequality, young people and the elderly, the environment, the demographic winter, the reception of migrants, and the building of a more just and inclusive society.” Like the Vatican, he is taking a “wait and see” approach, knowing well that not a few Catholics in Italy have welcomed Meloni’s victory.