I crossed the U.S.-Mexico border to save my son. This is my story. 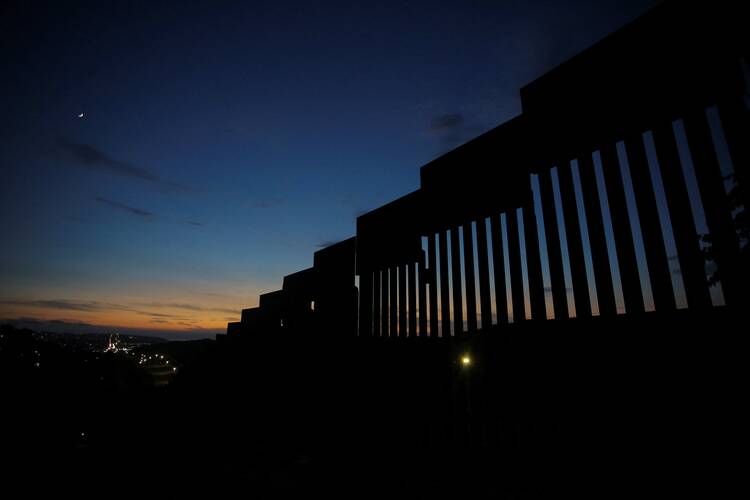 A general view from Tijuana, Mexico, shows a section of the border wall between Mexico and the United States on Aug. 1, 2022. (CNS photo/Jorge Duenes, Reuters)

In Paul’s Letter to the Romans, we read, “And we know that in all things God works for the good of those who love him, who have been called according to his purpose” (Rom 8:28). We humans are capable of dreaming—that is, we can create great goals for our lives. Sometimes we cannot fulfill our projects, but other times it is possible. But we always hope we are working toward God’s greater good.

I am fighting to build a life for us here in the United States. Let me tell you why.

I am fighting to build a life for us here in the United States. Let me tell you why.

I am a Colombian woman in my 30s. I was born in the city of Bogotá. I’m a hard worker, entrepreneur and single mother; my son is currently 12 years old. It is very difficult to tell our story since it stirs up many feelings in me, but it is important to me that the world knows that anything is possible with God’s help.

It all began because safety and public order are increasingly complicated in my country, Colombia. The neighborhood where I grew up is now called a “risk zone.” For the past few years, insurgent gangs have recruited children who are 11 years old and older. They force the children to be part of their gang, take them to training camps and teach them how to manipulate others. The gangs train the children to become people capable of fighting for the gang’s own goals. This is why my son’s life was at risk—these gangs could have easily recruited him.

I finally decided that we should flee after a group of eight gangsters entered our house at about 3 a.m. and threatened us with weapons. They tied our hands to our feet and took everything we had. The only thing they said was that we had to leave. It was clear to me at that moment that I needed to ensure my son’s safety.

Despite all the terrible moments we went through during that time, God accompanied us.

Once we were free, my mother asked other people in our neighborhood if they knew the names and addresses of the aggressors. We got the answers. We knew who was behind the violence. But when we reported the incident to the police, they told us not to submit the report. They said the gangs were dangerous and could harm my brothers and son again. The police advised us to leave it alone. Many officers support these gangs by taking bribes and collaborating with them. It is useless to try to denounce the groups when there is no law. It is a real cry into the void.

In the spring, six days after the horrific event, we left Colombia and headed to the United States. We flew to Panama and then to Mexico City. Then we took a three-day bus ride from Mexico City to the border with Mexicali. We were met with more corruption among the immigration agents in Mexico. They charge migrants money to pass checkpoints; if you don’t give them money, you can’t cross. These payments are not official government requirements but simply motivated by greed.

The immigration agents stopped the bus and told everyone to get off. They rummaged through our things, taking whatever they wanted. I had hidden our money in my underwear so they didn’t take away everything from me; otherwise, we wouldn’t have even made it that far. Despite all the terrible moments we went through during that time, God accompanied us.

You cannot imagine the fear in our hearts seeing the wall. Its height makes you feel like you are in a forbidden place, something really dark.

Once we arrived at a spot where the Colorado River runs through Mexico, we went to another town by truck. We stayed at a hotel in a tiny village. Being there is something I cannot describe. We sensed spirits of fear, death and evil—but those feelings happen when you find yourself in a cartel-run town. We started being followed by some people, and we knew we were in trouble. My family split up to lose them. We had so much fear and anxiety. When we tried to leave the town, they told us we had to pay or die, so we agreed to a payment.

But God was always with us.

Then we finally reached the U.S.-Mexico border. You cannot imagine the fear in our hearts seeing the wall. Its height makes you feel like you are in a forbidden place, something really dark. We walked until we found a spot where the border became a river. We went over the first wall using all our strength and gripping the bars with our hands. Then we climbed a second wall. But there were no border patrol agents. It reminded me of when God parted the Red Sea for the Israelites. We intended to surrender but had no way to do so. The only thing we heard was a helicopter that flew over, but it was as if they did not see us.

God was always leading us, just as he led the people of Israel when they left Egypt, guiding them day and night.

We walked along the river and saw many baby clothes and the clothing of adult men and women who passed before us. At first, it was very shocking to see so many things discarded. But people shed their items because walking in the beating sun is exhausting, and your body gets depleted. The less weight you carry, the easier it is to walk. That is why many people who arrive in the United States on a similar path only have what they’re wearing. When I think about all the people who walked through the desert for days or passed through the Rio Grande, it gives me chills. I kept thanking God we were O.K. during such a sad time in our lives.

We followed the river until we had to leave the path. The only thing we found for miles was a journalist who interviewed us. He gave us water. I tried to use his phone to call immigration so we could present ourselves to them and seek asylum, but they never arrived.

We walked for seven hours until we reached Yuma, Ariz. We were so tired, sunburned, thirsty and worn out; even our underwear was ripped from the journey. But once we were in Yuma, we thanked God because we officially had a chance at a life in this country of opportunity. God was always leading us, just as he led the people of Israel when they left Egypt, guiding them day and night.

A mother’s love overcomes any fear or wall that may arise.

We met another migrant family along the journey, and they introduced us to the people at a Catholic Worker house in another state. To this day, the Catholic Worker does an excellent job assisting us. They give us food and housing and helped me enroll my son in school. They are helping me with resources to locate an attorney to establish my asylum petition and fix my situation in this country.

I never imagined myself being an asylum seeker and living without official documentation until I can find a good lawyer. Although some parts of this journey were my plans and thoughts, I know others were God’s plans for us. He has helped us, and his mercy is renewed daily. I am grateful because, in the middle of everything, I do not feel like someone who has done something wrong. I just came so I could offer my son a life of opportunity. I hope that he can fulfill his dreams of playing soccer, maybe eventually at a university or even as a professional. In our country, he cannot play at all.

The only thing I ask in my prayers is that we win our asylum case. I pray for a permit to work and that this country of opportunity will allow us to prove we are grateful human beings and want to contribute good things.

I know my son will represent the United States as his homeland proudly. I dream of seeing my son graduate from school, that the United States will allow him to study at university so he can become a professional who contributes to the community.

In Jos 1:5, we read, “No one will be able to stand against you all the days of your life. As I was with Moses, I will be with you; I will never leave or forsake you.”

No matter what happens, I will show this same steadfast love of and protection for my son. A mother’s love overcomes any fear or wall that may arise.

V.A. García
Show Comments ()
Join the conversation: Login or create an account
Before you can comment, you need to update your profile to include your first and last name, as required in our comments policy. Then reload this page and you'll be set up for commenting. Update your profile