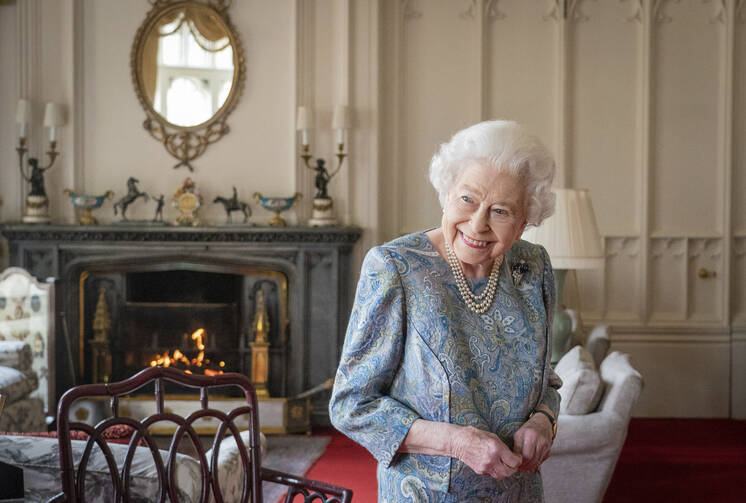 Catholic leaders from the United Kingdom and around the world are remembering Queen Elizabeth II, who died Thursday at age 96, with many recalling her deep faith and praising her example of public service.

“Deeply saddened to learn of the death of Her Majesty Queen Elizabeth II, I offer heartfelt condolences to Your Majesty, the Members of the Royal Family, the People of the United Kingdom and the Commonwealth,” Pope Francis wrote in a telegraph to King Charles III, who assumed the throne following his mother’s death.

Francis met with Elizabeth in 2014 at the Vatican, the fourth pontiff the queen met during her reign. In his message, Pope Francis highlighted the late queen’s “unstinting service to the good of the Nation and the Commonwealth, her example of devotion to duty, her steadfast witness of faith in Jesus Christ and her firm hope in his promises.”

Catholic leaders from around the world are remembering Queen Elizabeth II, who died Thursday at age 96, with many recalling her deep faith and praising her example of public service.

In England, Cardinal Vincent Nichols, the archbishop of Westminster and head of the Catholic Bishops’ Conference of England and Wales, said in a statement that the nation is “heartbroken in our loss at her death.”

“Even in my sorrow, shared with so many around the world, I am filled with an immense sense of gratitude for the gift to the world that has been the life of Queen Elizabeth II,” Cardinal Nichols said. “At this time, we pray for the repose of the soul of Her Majesty. We do so with confidence, because the Christian faith marked every day of her life and activity.”

Cardinal Nichols continued: “This faith, so often and so eloquently proclaimed in her public messages, has been an inspiration to me, and I am sure to many. The wisdom, stability and service which she consistently embodied, often in circumstances of extreme difficulty, are a shining legacy and testament to her faith.”

In the United States, Cardinal Sean O’Malley of Boston and Cardinal Wilton Gregory of Washington, D.C., offered condolences and prayers.

In a statement, Cardinal O’Malley called Elizabeth “a source of stability and a symbol of strength for Britain and throughout the world.”

Cardinal Gregory wrote on Twitter that the faithful in the archdiocese join “people of good will everywhere in asking the All-Merciful Father to receive Elizabeth II into paradise & to comfort her family & all of the British community with the blessing of peace & consolation at this time of sorrow and loss.”

In a statement, Cardinal O’Malley called Elizabeth “a source of stability and a symbol of strength for Britain and throughout the world.”

“For many decades, the Queen has been one of the most well-known and loved people throughout the world. She was a woman of profound faith, humanity, and wisdom who embodied the highest values of the British people,” Cardinal O’Malley said. “We extend our condolences to the Queen’s children and the generations of their families, and to all the British people as they mourn the passing of this consequential woman who served with grace and charity for seven decades.”

Bishop Hugh Gilbert, the president of the Bishops’ Conference of Scotland, praised the queen’s “determination to remain active to the end of her long life,” which he called “an example of Christian leadership.”

Pope Francis highlighted the late queen’s “example of devotion to duty, her steadfast witness of faith in Jesus Christ and her firm hope in his promises.”

A statement from the Jesuits in Britain recalled Queen Elizabeth’s visit to Jesuit schools in England and offered prayers on her behalf.

“No-one could fail to be impressed by Her Majesty’s faithful and selfless dedication to public service. Her Christian faith, about which she spoke so eloquently in the latter years of her reign, was central to her understanding of her role as Head of State,” said Damian Howard, S.J., provincial superior of the Jesuits in Britain. “The strength she found in Christ helped to hold the people of this country together in a surprisingly humble way. The Jesuits pray for her in death as they did during her life. May she rest in peace.”

In Canada, Archbishop J. Michael Miller, the head of the Archdiocese of Vancouver, called Elizabeth “a light to the nations.”

“The faithful of the Archdiocese of Vancouver join all those who mourn the passing of Queen Elizabeth II,” Archbishop Miller said in a statement. “As sovereign she carried out her role with dignity, humility and an unmatched dedication to the responsibilities that God placed upon her. She was a bedrock of stability in our restless world.”

In Canada, Archbishop J. Michael Miller, the head of the Archdiocese of Vancouver, called Elizabeth “a light to the nations.”

In her role as queen, Elizabeth was also head of the Church of England. Archbishop Justin Welby, the Archbishop of Canterbury, said the nation had “lost the person whose steadfast loyalty, service and humility has helped us make sense of who we are through decades of extraordinary change in our world, nation and society.”

Archbishop Welby recalled Elizabeth’s leadership during the height of the Covid-19 pandemic and how she turned to her faith when her husband, Prince Philip, died last year.

“As a faithful Christian disciple, and also Supreme Governor of the Church of England, she lived out her faith every day of her life. Her trust in God and profound love for God was foundational in how she led her life – hour by hour, day by day,” he said.

President Joe Biden and First Lady Jill Biden recalled being received by Elizabeth during their first trip abroad as the first couple in 2021.

“Supported by her beloved Prince Philip for 73 years, Queen Elizabeth II led always with grace, an unwavering commitment to duty, and the incomparable power of her example,” the Bidens said. “She endured the dangers and deprivations of a world war alongside the British people and rallied them during the devastation of a global pandemic to look to better days ahead.”

Jillian Rice and Cristobal Spielmann, O’Hare fellows at America, contributed to this report.