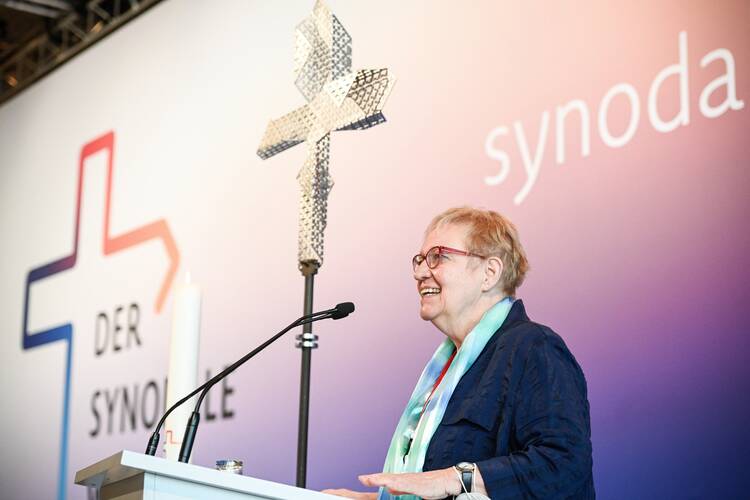 Maria Boxberg, theologian and spiritual director of the Synodal Path, speaks during the third Synodal Assembly in Frankfurt, Germany, in this Feb. 5, 2021, file photo An unsigned "declaration from the Holy See," published by the Vatican press office, warned that Germany's Synodal Path cannot institute "new modes of governance and new approaches to doctrine and morals." (CNS photo/Julia Steinbrecht, KNA).

Bonn/Vatican City (KNA) The Vatican has warned Catholics in Germany against taking unilateral action to reform. The Synodal Path reform project initiated by the bishops and the Central Committee of German Catholics (ZdK) representing laypeople “does not have the faculty to oblige bishops and the faithful to assume new forms of governance and new approaches to doctrine and morals,” the Holy See said in a statement published on Thursday.

The Synodal Presidium rejected the criticism. “We will not tire of emphasizing that the church in Germany will not follow a ‘German special path’,” it said in a joint statement by the president of the German Bishops’ Conference, Bishop Georg Baetzing, and ZdK President Irme Stetter-Karp. This was also stated in the statutes of the Synodal Path, they added.

“Nevertheless, we see it as our duty to clearly state where, in our view, changes are necessary. In doing so, we already feel that the problems and questions we name are similar worldwide,” said the two presidents of the consultations on the future of the church in Germany launched in 2019.

The Vatican said “it is hoped that the proposals of the path of the Particular Churches in Germany will converge into the Synodal Path being taken by the Universal Church.”

The statement came as a surprise to many observers. It is not yet clear who is responsible for it but it refers to earlier statements by Pope Francis.

"We see it as our duty to clearly state where, in our view, changes are necessary. In doing so, we already feel that the problems and questions we name are similar worldwide."

Baetzing and Stetter-Karp stressed that they would of course “contribute to the synodal process of the Universal Church with the experiences and results of the Synodal Path.” At the same time, they complained about a lack of communication with Vatican leaders. “Since the beginning of the Synodal Path, we have endeavored on the part of the presidium to find direct paths of communication with the Roman authorities,” they said. This would make it possible to resolve open questions. “Unfortunately, the Synodal Presidium has not been invited for a discussion to date.”

In the Synodal Path, bishops and lay representatives are focusing on the issues of power, the priesthood and sexual morality, as well as the role of women in the church. Topics being discussed include a re-evaluation of homosexuality, the division of power in the church and the participation of laypeople in decision-making processes in the church.

The process was triggered by the crisis of confidence in the church in the wake of the abuse scandal. The project has met with mixed reactions in Germany and abroad. While progressive Catholics welcome the reform proposals, there has also been criticism. Most recently, several cardinals, as well as open letters from bishops around the world, especially from eastern Europe, America and the southern hemisphere, have expressed concern about a possible schism as a result of German reform demands.

The professional association of pastoral assistants and the progressive group “Wir sind Kirche” (We are the Church) echoed the criticism of the Vatican’s stance. The Catholic initiative “Neuer Weg” (New Path) welcomed the statement, saying the church in Germany was being called on to “stop its own special paths and concentrate on the worldwide synodal process.”

The Catholic initiative “Neuer Weg” (New Path) welcomed the statement, saying the church in Germany was being called on to “stop its own special paths and concentrate on the worldwide synodal process.”

The theologian Julia Knop, who teaches in the eastern German city of Erfurt, said the Vatican’s concerns were unfounded: She said no one saw themselves as being authorized to “go it alone in national church matters that require Universal Church agreement.”

ZdK Vice-President Thomas Soeding said there was no reason to end the Synodal Path. He told the Koelner Stadt-Anzeiger newspaper that the project “does not claim a mandate for changes in doctrine.” He added: “But where things are stuck, for example in sexual ethics, there are positions that have to be discussed and decided by the Universal Church.” He said he hoped that those positions would be heard. Changes were overdue. “Rome wants more participation of the local churches – then the headquarters must also allow the local initiatives,” Soeding added. All proposals for reforms of the church leadership were fully in line with church law.

Bishop Bertram Meier of Augsburg welcomed the Vatican’s paper. “I think it is good that the Holy See has decided to make this statement,” he said. “First of all, this shows that Rome is very interested in what is happening in Germany. The risk to unity is virulent.” He added that the Vatican had clearly stated that the paths taken by individual countries and dioceses must be integrated into the worldwide synodal process. “I can only welcome that as a supporter of the universal church and also as a Universal Church bishop.” The Bavarian bishop added that the Vatican was not putting the brakes on the Synodal Path but was “trying to channel it and have it enriched by the Universal Church.”

The dean of the city of Bonn, Wolfgang Picken, also praised the statement from Rome. “It was necessary to point out the limits of the Synodal Path in Germany and to contradict the self-understanding of some synodal members,” he said.

Bernhard Anuth, an expert in church law, said he was not surprised by the Vatican’s statement. He said the paper only clarified what was in the Synodal Path’s statutes. On issues that concerned the church worldwide, “every resolution can only be a request to the pope,” Anuth said on Friday. “However, numerous statements by prominent representatives of the Synodal Path could be understood, and probably have been, as though Germany was currently pursuing concrete structural reforms and changes in church doctrine.”

The Roman statement “should reassure all those Catholics worldwide who are viewing the Synodal Path with concern, while among Germans filled with hope for reform, the disappointment that was to be expected has only come a little sooner,” said Anuth.