‘God may be calling us’: Meet the women aspiring to become deacons 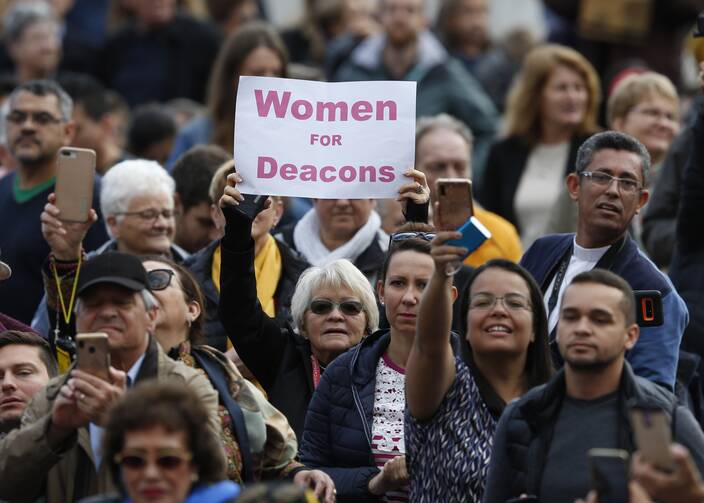 A woman holds a sign in support of women deacons as Pope Francis leads his general audience in St. Peter’s Square at the Vatican Nov. 6, 2019. (CNS photo/Paul Haring)

I recently attended a listening session for the synod in which the global church is now participating. The priest taking notes for the bishop began the session by saying something along the lines of: “Don’t waste your time coming up here and making a comment that asks the church not to be Catholic. Women cannot receive holy orders. This is an infallible teaching of the Catholic Church. No generation in the church will ever see a woman at the altar.”

It was an odd way to begin a listening session, both because no topic is meant to be off the table at the sessions, and because the statement is false. While the Catholic Church is not considering ordaining women to the priesthood, the ordination of women to the permanent diaconate is a real possibility.

In 2016 Pope Francis created a commission to study the history of women deacons. This focus on history is notable because it acknowledges that women deacons are an ancient tradition in the church. St. Phoebe is named as deacon in the Bible (Rom 16:1-2). Both the Council of Nicea (A.D. 325) and the Council of Chalcedon (451) mention the ordination of women to the diaconate. Chalcedon states, “No woman under 40 years of age is to be ordained a deacon,” thereby suggesting that older women deacons were permitted. As late as the 11th century, the right of the diocesan ordinary to ordain women deacons was confirmed by three consecutive popes. Pope Benedict VIII wrote in 1017, “We concede and confirm to your successors in perpetuity every episcopal ordination not only of presbyters but also of deacons or deaconesses.”

In speaking to women who desire to become deacons, I have found that they are overwhelmingly obedient to the church.

In my experience, many people who oppose the idea of women serving in diaconal ministry fear that the potential female candidates are not faithful Catholics. But in speaking to some of these women, I have found that they are overwhelmingly obedient to the church, which is exactly why they want to assist her in diaconate ministry.

Ellie Hidalgo is a 56-year-old Cuban American woman and the co-founder of Discerning Deacons. She believes there is a need for women deacons and that God already is calling women to this ministry. Ms. Hidalgo has years of experience serving the church, first as a journalist for a Catholic newspaper and then as a pastoral associate in one of the poorest churches in the Archdiocese of Los Angeles, Dolores Mission, a Jesuit parish associated with Homeboy Ministries.

Ms. Hidalgo tells me she believes the work she did at Dolores Mission was diaconal. She ran a group for parents who had lost children to gang violence, worked in administration and did fundraising. She also preached. A priest was assigned to Dolores Mission, but his Spanish language skills were poor. Parishioners complained because they could not understand him. As Ms. Hidalgo tells it, a parish leader asked, “The people of God need to be nurtured. Would you be willing to offer a reflection?” So she did. “I would preach five, six, seven Masses in a row some Sundays,” she recalls. “The reality was that the people of God needed to be nurtured. And I had been formed. I had a master’s in pastoral theology.”

She continues, “At first, I was a bit shy, but I realized that God had prepared me for this, and this work was a way I could be of service to our community.” The Catechism of the Catholic Church states that the baptized have a right to spiritual care. And for the most part, the parishioners embraced her role. There was some opposition, Ms. Hidalgo says, but mostly it was the just the opposite. “Almost always a woman would approach me after Mass and say, ‘You shared a reflection on today’s readings, and I’ve never heard a woman preach before and I’ve been waiting for this day.’”

“The reality was that the people of God needed to be nurtured. And I had been formed.”

Ms. Hidalgo continues, “I think of the woman at the well (John 4). It’s right there in the Bible. After her encounter with Jesus, she goes out and preaches and tells her story and brings many more people to Jesus. She felt a call to speak, a call to share her testimony and to bring others to Jesus. Once again God may be calling us.”

Those opposed to women deacons sometimes make the accusation that those interested in the ministry are simply seeking greater power in the church. But the reality of diaconal formation is intended to combat that. Deacon James Knipper, who serves at St. Paul Parish in Princeton, N.J., says: “The whole idea of a good diaconate program is to ferret out those people who are just focused on power. I’m not sure that we’ve done a good job of that, but we had women deacons for 800 years. There’s no reason not to have them back.”

Deacon Manuel Valencia, who serves at Mater Dolorosa Retreat Center in Sierra Madre, Calif., says: “With the restoration of the permanent diaconate [for men], the church took a victory lap but that victory lap ought not to have been run because Phoebe, because women, were not part of the restoration, [as they were in the early church]. For me pointedly excluding women was nothing short of sacrilegious. I cannot understand it. Phoebe continues to be excluded from her rightful place.”

In many Catholic circles I have seen and heard so much fear: fear to have the conversation, fear that asking these questions will put one’s job or one’s reputation in a Catholic organization at risk, fear that restoring women to the diaconate is a radical feminist plot to destroy the church. But the women who want to serve the church love her and see her as their mother.

Holly Taylor Coolman is a mother of five and the chairperson of the theology department at Providence College, where she teaches undergraduates as well as men preparing to become deacons. She says, “My life is given over to service in the Catholic Church and that’s going to be true whether I were ever ordained a deacon or not. But I would be open to discerning what I think is an important question, which is, ‘Am I called to diaconal service?’ I do not have a cavalier attitude about ordination. A calling, a vocation, is not something you just carry around in your back pocket no matter what gifts you have. A calling is worked out in the context of a community.”

“I do not have a cavalier attitude about ordination. A calling, a vocation, is not something you just carry around in your back pocket no matter what gifts you have.”

Rhonda Miska, 41, works for a parish in St. Paul, Minn. She says: “I have a passion for ministry. I don’t know if I would be a deacon, but what I can say is that it would be meaningful to me to know that it’s an option. Something I hear all the time is that Catholic women don’t preach. I say, ‘Yes we do. Look at Catherine of Siena. Look at the Desert Mothers. The door is open, and Pope Francis has welcomed this discernment.’”

Claire Fryqvist, 38, is a mother of six who says she would “love to serve as a deacon.” “I think [my husband] and I both would love to be deacons. It’s the work we already do. We ran religious education at our parish; we ran the music ministry. I do a lot of cantoring.” Ms. Fryqvist has worked in pro-life advocacy, has started a co-operative Montessori preschool and is a writer and mother.

She says, “I love to preach. I have some experience preaching. I lived in Honduras at an orphanage called the Farm of the Child. We would often have Communion services because we had a shortage of priests in the area. I loved preaching at those Communion services, as a writer and a speaker; it’s a wonderful way to share faith with one another. For lay people because we don’t have to preach every week, because it hasn’t become rote for us, perhaps it’s sometimes easier to craft something beautiful.” Ms. Fryqvist says her only reservation is “the people who think the diaconate is the road to women becoming priests. That’s not what it is. But it seems like priests are burned out and exhausted. There should be more delegating; that seems obvious.”

It also seems clear that it would be helpful to have women to assist other women. As Ellie Hidalgo says: “There was a woman in my parish who had had a number of miscarriages. She felt that the priest, poor guy, just didn’t know what to say to her. Imagine if he could have said, ‘I have a wonderful woman deacon in my parish. I’ll make you an appointment with her.’”

Deacons do servant work. The role was created to make sure the widows and those on the margins were not being neglected by the early church in the daily distribution of food. They were created to serve Jesus when he appears in the form of the poor. And Jesus tells us in Matthew’s Gospel that we will be judged at the end of time by how well we cared for the poor and forgotten. For I was hungry and you gave me something to eat, for I was thirsty and you gave me something to drink, I was a stranger and you welcomed me. I was naked and you clothed me. I was in prison and you visited me. Never once does Jesus tell us we will be judged by how well we conformed to traditional gender roles, how well we did not discuss forbidden topics, or for how much we refused to change.

Anna Keating is the co-author of The Catholic Catalogue: A Field Guide to the Daily Acts That Make Up a Catholic Life.