Titus Brandsma was killed in a Nazi death camp. This Sunday, Pope Francis will make him a saint. 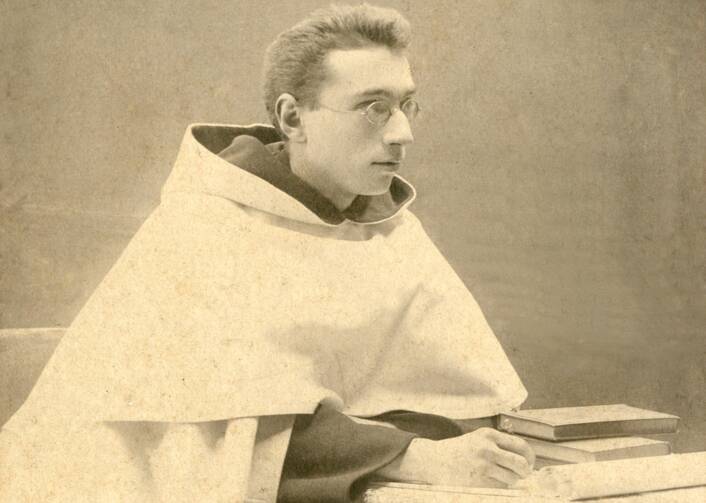 Pope Francis has approved the canonization of Blessed Titus Brandsma, a Dutch Carmelite martyred at the Dachau concentration camp. Blessed Brandsma, pictured in an undated photo, is scheduled to be canonized on May 15 at the Vatican along with nine others. (CNS photo/courtesy Titus Brandsma Institute)

Priest, professor, rector, journalist, mystic, linguist, member of the Carmelite order, martyr of the 20th century: Among the many titles that Titus Brandsma carries before his name, only one will prevail after May 15, that of saint. Pope Francis will canonize him along with Charles de Foucauld and eight other “blessed” ones, presenting Brandsma to the world as a spiritual model, especially for those who live under authoritarian rulers.

Brandsma was beatified in 1985 by St. John Paul II, who defined him as a “martyr of freedom of expression.”

“Valorous journalist, imprisoned and killed in a death camp for his strenuous defense of the Catholic press, he remains the martyr of freedom of expression against the tyranny of dictatorship,” said John Paul II in a meeting with journalists in 1986. “Truth is the indissoluble ally of freedom of expression, and therefore the main coefficient of progress in all areas of human life,” he added.

Titus Brandsma was beatified in 1985 by St. John Paul II, who defined him as a “martyr of freedom of expression.”

Titus Brandsma lived between 1881 and 1942, when he was killed with a lethal injection at the concentration camp of Dachau, in Germany—the first camp established by the Nazi regime. Born to a humble, devout Catholic family in rural Frisia, in northern Netherlands, he became a Carmelite priest and a teacher. Brandsma was a renowned Dutch intellectual, an icon of resistance to the Nazi occupation both in academia and the press.

Arrested in January 1942, the Carmelite friar was put to death only six months later, on July 26 of the same year.

“Blessed loneliness,” wrote Brandsma in his prison diaries. “I find myself in this cell as in my own home. So far I have not been bored at all, on the contrary. I am alone, that’s true, but the Lord is closer to me than ever.

“I feel like shouting for joy because the Lord wanted me to discover Him in all his fullness, without needing to be in the midst of people, or for them to come here. He is my only refuge. I feel happy. I will stay here forever, if He commands it. Few times have I felt so happy.”

The prison journal became some of Brandsma’s best known texts, but throughout his life he wrote extensively on the social and cultural life of the Netherlands, especially his homeland Frisia, as well as spiritual reflections on Mary, the scapular, the Via Crucis and the lives of the saints. As an academic, he specialized in philosophy and the history of mysticism.

He founded schools and taught at the Catholic University of Nijmegen, where he was rector in 1932. Brandsma was also a passionate advocate of the Esperanto language, whose promoters admire him to this day.

“Blessed loneliness,” wrote Titus Brandsma in his prison diaries. “I find myself in this cell as in my own home. I am alone, that’s true, but the Lord is closer to me than ever.”

“Titus Brandsma had so many virtues, so many facets, but I single out charity as the most central,” said Fernando Millán Romeral, O.Carm., director of the Institute of Spirituality at the Comillas University in Madrid, and vice-postulator of Brandsma’s canonization cause. “He expressed charity in everything he did.

“He is a Christian martyr because he realized that Nazism was a sort of ‘neo-paganism,’ the idolatry of race, nationalism, power, arrogance. Faced with this model, he proposed the Christian model as the only truthful one,” Father Millán told America.

Totalitarianism was for Brandsma the most radical fruit of this “neo-paganism.” In his inaugural address as rector of the Catholic University of Nijmegen (now Radboud University) in 1932, he said: “Among the many questions I ask myself, none worries me more than the enigma of why it is that man, who finds ways of development and feels proud of his achievements, turns away from God in such a remarkable way. Is it only the fault of those who act in this way? Are we required to do something so that God will once again shine on the world with a clearer light?”

As a professional journalist, Brandsma published many articles. In 1909 he founded a newspaper that achieved a circulation of 13,000 copies a day—Karmelrozen (“Roses of Carmel”)—and took over the local newspaper in Oss in 1919. He was a spiritual father to many of his fellow journalists. Many still remember him as one of their own.

Because of his public and private positions opposing the expansion of Adolf Hitler’s regime in Europe, “Professor Brandsma” had long been watched by the authorities. The final straw that led to his arrest was a letter he sent to school principals in August 1941.

“Among the many questions I ask myself, none worries me more than the enigma of why it is that man, who finds ways of development and feels proud of his achievements, turns away from God in such a remarkable way.”

“That year, the Dutch bishops opposed the order to expel Jewish children from Catholic schools. As director of the association of Catholic schools, Father Titus spoke out publicly in a decisive manner, with firm arguments,” Father Millán said.

That letter called the forced expulsion order of Jewish children a “flagrant injustice” and an “attack on the mission of the Church itself.”

“The Church, in carrying out its mission, knows no distinction of sex, race or nation,” Brandsma wrote. In view of this and other publications, the Nazi police arrested him in January 1942. Transferred a few times, he was finally taken to Dachau in June 1942. Sharing the fate of many of the 40,000 prisoners there, Father Titus was killed and his body cremated.

Testimonies of those who met Brandsma in prison were collected for the canonization process. Many related his kindness, patience and the spiritual support he offered other prisoners, in spite of his fragile health. He was an impressive figure even to the nurse who executed him with an injection of carbolic acid. The testimony of “Tizia”—a pseudonym used in the beatification process to refer to a camp nurse who acted as Titus Brandsma’s executioner—was essential in confirming the virtues of the new saint.

As Father Millán records in his biography of Brandsma, the The Courage of Truth, Tizia, at that time a Nazi, “executed” prisoners in the infirmary on a daily basis, but felt uncomfortable in the presence of Father Titus. He was always kind to her, unlike other prisoners who were hostile to her because of her role in the camp.

“In a world of garbled rhetoric, Father Titus Brandsma is a witness to the power of moral clarity.”

Once, he gave her a wooden rosary, even though she was an atheist who openly “despised priests.” Not knowing what to do with the object, she kept it in her apron pocket. On the day when she injected Brandsma with the liquid that would end his life, she felt nervous and irritated. Some time later, she was moved when she found that rosary again. In her testimony, Tizia, who kept her real identity hidden for all these years, attributes to Titus Brandsma her abandonment of the Nazi ideology and her conversion to the Catholic faith.

The miracle that allowed his canonization was the healing of one of his confreres, Michael Driscoll, O.Carm., who had a severe form of skin cancer in 2020. On a YouTube video, he said that he touched a relic from Brandsma’s Carmelite habit and asked for his intercession. “Father Titus never refused when he was asked for help by your people: In his name, I call to you with my needs,” he prayed.

An expert on Brandsma’s life and spirituality, Dianne Traflet, associate dean for graduate studies and professor of pastoral theology at the Immaculate Conception Seminary and School of Theology of Seton Hall University, told America that “in a world of garbled rhetoric, Father Titus Brandsma is a witness to the power of moral clarity.”

She believes that his deep spiritual life made him “close to the Truth.” Brandsma “spoke the truth of God’s presence, power, and love.”

Remembering his description of Nazism as “a sewer of falsehood,” she said, “He chose words carefully and prudently, but also courageously.”

During the beatification ceremony, 37 years ago, St. John Paul II noted that, as a disciple of Christ, Brandsma was able to “not answer hatred with hatred but with love,” which “perhaps is one of the greatest tests of a person’s moral powers.”

Dr. Traflet believes that in a world of escalating violence, “Father Titus Brandsma reminds us of the need for spiritual strength, the power that comes from disciplined interiority, as he denounced destruction with the fortitude of a spiritual builder.”

Another important legacy of Brandsma, said Father Millán, is the notion that mysticism is not an experience accessible only to spiritually higher or perfect individuals. “For him, spirituality is not reserved for a special category of people,” he said. “Every believer is called to it, even while recognizing that it is a special gift and grace.”

Filipe Domingues is a Brazilian journalist who reports on religion, environment and economics from Rome.