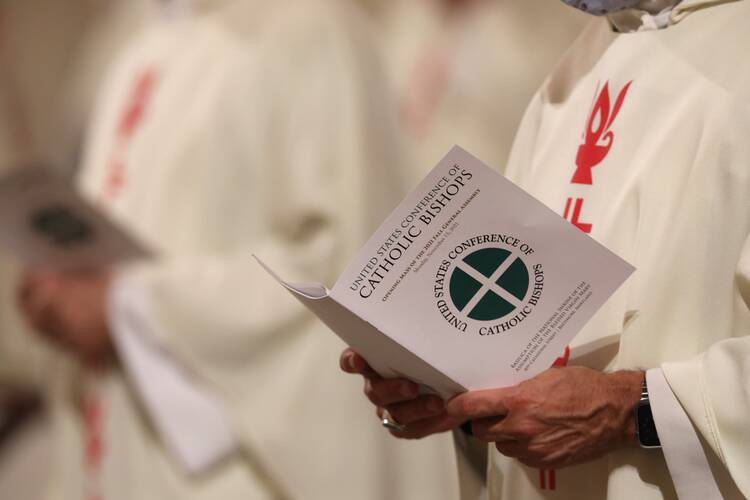 A bishop holds a booklet as he attends Mass Nov. 15, 2021, at the Basilica of the National Shrine of the Assumption of the Blessed Virgin Mary in Baltimore during the fall general assembly of the U.S. Conference of Catholic Bishops. (CNS photo/Bob Roller)

It is not too often that a few dozen U.S. Catholic bishops are gathered together in one place, outside the regular meetings of the U.S. Conference of Catholic Bishops. But last week in Chicago, bishops from throughout the United States and a few from other parts of the world engaged in dialogue with theologians, scholars and journalists about the state of the church. The gathering sought to address how Catholics might escape the political polarization gripping their lives and how they might contribute to a better civic life and more charitable public discourse.

The conference raised curiosity on social media, in part because a special Mass was held at Chicago’s Holy Name Cathedral in response to Pope Francis’ call to pray for peace in Ukraine. That Mass, presided over by Cardinal Blase Cupich, was concelebrated by dozens of bishops, including Archbishop Christophe Pierre, the apostolic nuncio to the United States, who led the assembly in reading the pope’s prayer for peace. But as Michael Sean Winters noted at The National Catholic Reporter, the conference itself was “difficult to describe,” as it was “held under Chatham House Rule, meaning attendees agreed they could speak afterward about the contents of the discussions but not reveal who had made any particular comment.”

Cardinal Cupich prayed the Act of Consecration of all humanity, especially Russia and Ukraine, to the Immaculate Heart of Mary at Holy Name Cathedral on March 25. He was joined by bishops from the @USCCB attending a conference at Loyola. (Karen Callaway/ Chicago Catholic) pic.twitter.com/sxF7qVlLB7

But as a participant in the conference (I moderated a panel about the quickly evolving Catholic media landscape), a few items stuck out to me.

First, there seemed to be a willingness among bishops to listen to their lay collaborators.

Last week in Chicago, bishops from throughout the United States and a few from other parts of the world engaged in dialogue with theologians, scholars and journalists about the state of the church.

Two of the keynotes were delivered by lay theologians—Villanova University’s Massimo Faggioli and Loyola University Chicago’s Therese Lysaught—and the panels were composed of lay experts in theology, media and the economy. Cardinals and bishops asked thoughtful questions and offered observations, but much of the talking came from laypeople. (Thus, I wonder if Chatham House rules were necessary. As a journalist, I’d say probably not, since transparency is good and the message at the conference was hopeful. But perhaps the promise of anonymity made it easier for bishops to agree to participate.)

Ms. Lysaught, who delivered a paper about political culture wars and divisions in the church, said that the spirit of collaboration stuck out to her.

“It’s the first time in my 30 year career as a Catholic theologian that I’ve been invited to spend two days meeting, eating with, listening to and discussing the church, theology, and pastoral realities with bishops,” she told me in an email following the conference. “I was impressed by how closely they listened, by the honesty of their comments, and in seeing them in such serious conversation with each other and with the other participants at the meeting.”

She said she hopes those conversations demonstrate to bishops that they have a reservoir of support available from Catholic laypeople who want to see their leaders succeed.

“It’s the first time in my 30 year career as a Catholic theologian that I’ve been invited to spend two days meeting, eating with, listening to and discussing the church, theology, and pastoral realities with bishops.”

“I hope they left with a sense that they’re supported, that there is hope for the church in the U.S., that there is a large cadre of scholars and laypeople who’ve got their backs and that building relationships with and engaging in conversations with each other and these scholars and laypeople will only strengthen their ability to lead the church, and even make it easier,” she said.

Second, the participants recognized that threats to the implementation of the Second Vatican Council should be taken more seriously and that Pope Francis’ emphasis on synodality might be the way to counter those attacks.

Mark Massa, S.J., head of the Boisi Center for Religion and American Public Life at Boston College—which co-hosted the gathering along with Loyola University Chicago’s Hank Center for the Catholic Intellectual Heritage and the Center on Religion and Culture at Fordham University—said that understanding resistance to the council reforms explains why some Catholics oppose Pope Francis.

“We want to show that opposition to Pope Francis, not universally, but to a large extent is opposition to Vatican II,” Father Massa told The Torch, a student newspaper at Boston College. “Francis is trying to cash the check that Vatican II wrote: synodality was the big thing.”

“We want to show that opposition to Pope Francis, not universally, but to a large extent is opposition to Vatican II,” Father Massa told The Torch.

Third, perhaps the most fruitful portion of the conference was the interactions made possible by having the event be exclusively in-person, over meals and coffee breaks and quick encounters in an elevator.

“Our Catholic tradition places a unique emphasis on the value of relationship and face-to-face dialogue,” Mike Murphy, who leads the Hank Center, told me in an email. “After two tough years of amputated community, I see again why.”

He added: “It was useful to prepare for the conference on Zoom, but nothing can replace the power of person-to-person presence, and so many spoke about this, about how proximity and nearness make all the difference.”

Some bishops talked candidly about the challenges of re-emerging from the pandemic, and about how routines have been upended and many people are simply not returning to parishes. Others explained that the Catholic media landscape can be frustrating, especially when outlets describe themselves as Catholic but seem intent on undermining the pope or attacking other believers. But those same outlets are reaching these bishops’ flocks, offering a steady stream of anger and gossip that church leaders seem unable to rein in.

Organizers hope the gathering will become a regular opportunity for bishops to gather with one another and with lay experts to consider the challenges facing the church.

Finally, organizers hope the gathering will become a regular opportunity for bishops to gather with one another and with lay experts to consider the challenges facing the church.

“It’s an opening meeting that we hope will become an annual or semi-annual event that will provide a forum where bishops and theologians can talk frankly to each other about important things that really get buried in the press,” Father Massa said.

There have been similar efforts in the past. The Chicago conference felt reminiscent of a gathering held at Boston College in 2017, where bishops and theologians engaged in dialogue about the implementation of “Amoris Laetita,” the pope’s 2015 encyclical about family life. And at Catholic colleges and universities throughout the country, thoughtful conversations about challenges facing the church are held regularly. The effect of these kinds of gatherings isn’t quantifiable, but the fact that they are happening at all, especially in an era of hyperpartisanship and polarization, is a sign of hope and possibility.

“In an environment of radical polarization, the church is in a unique position to offer practical remedies,” Mr. Murphy told me. “Why? It has known and lived in such tensions for its entire existence. Imperfectly but authentically with solid periods of light, hope and nourishment.”

He added, “The challenge is to inhabit tensions fruitfully as this is the true gift of the Gospel and central to the church’s way of proceeding.”