Pope Francis: Consecrating Russia and Ukraine to Mary is ‘not a magic formula but a spiritual act.’ 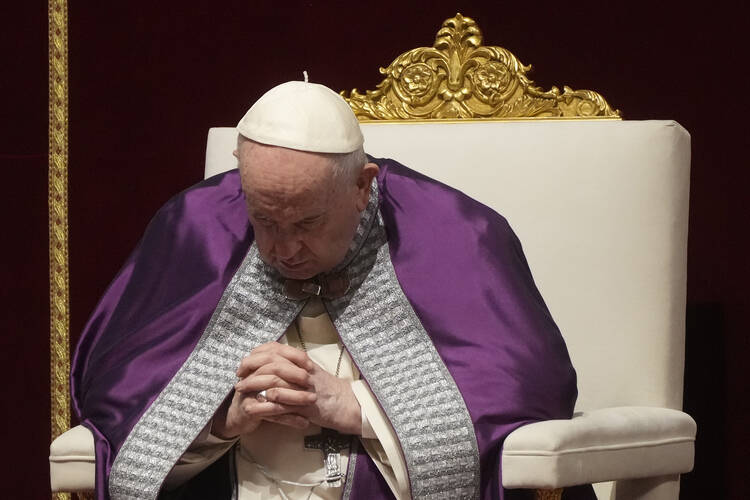 ROME (AP) — Pope Francis presided Friday over a special prayer for Ukraine that harked back to a century-old apocalyptic prophecy about peace and Russia that was sparked by purported visions of the Virgin Mary to three peasant children in Fatima, Portugal, in 1917.

Francis invited bishops, priests and ordinary faithful around the world to join him in the consecration prayer, which opened with Francis entering St. Peter’s Basilica before an estimated 3,500 people. During the event, the pope confessed his sins and absolved others in one of the basilica’s confession booths.

The service was Francis’ latest effort to rally prayers for an end to the war while keeping open options for dialogue with the Russian Orthodox Church and its influential leader, Patriarch Kirill. Francis has yet to publicly condemn Russia by name for its invasion, though his denunciations of the war in Ukraine have grown increasingly outraged.

Pope Francis presided Friday over a special prayer for Ukraine that harked back to a century-old apocalyptic Fatima prophecy about peace and Russia.

The prayer ritual is of deep spiritual importance to many Catholics and a source of fascination to others. It deals with some of the more controversial aspects of the Catholic faith: purported visions of the Madonna, revelations of hell, Soviet communism and the death of a pope, and questions about whether the prophecies contained in the so-called “secrets of Fatima” have already been fulfilled or not.

To hammer home the universal nature of the event, the Vatican translated the text of the prayer into three dozen languages. Retired Pope Benedict XVI participated from his home in the Vatican gardens. A papal envoy celebrated a simultaneous service at the shrine in Fatima.

[What does Our Lady of Fátima have to do with Russia and Ukraine?]

The Fatima story dates to 1917, when according to tradition, Portuguese siblings Francisco and Jacinta Marto and their cousin Lucia said the Virgin Mary appeared to them six times and confided to them three secrets. The first two described an apocalyptic image of hell, foretold the end of World War I and the start of World War II, and portended the rise and fall of Soviet communism. The children were between 7 and 10 years old at the time.

In 2000, the Vatican disclosed the long-awaited third secret, describing it as foretelling the May 13, 1981, assassination attempt against St. John Paul II in St. Peter’s Square.

Pope Francis said the act of consecration of Russia and Ukraine to Mary’s Immaculate Heart was “not a magic formula, but a spiritual act.”

According to later writings by Lucia, who became a nun and died in 2005, Russia would be converted and peace would reign if the pope and all the bishops of the world consecrated Russia to the “Immaculate Heart of Mary.” Lucia later claimed that John Paul fulfilled that prophecy during a Mass on March 25, 1984, exactly 38 years ago Friday, even though he never specified Russia in the prayer.

The text of Francis’ prayer appears to correct that 1984 omission. It reads: “Therefore, Mother of God and our Mother, to your Immaculate Heart we solemnly entrust and consecrate ourselves, the Church and all humanity, especially Russia and Ukraine.” It adds: “Grant that war may end and peace spread throughout the world.”

In his homily Friday, Francis said the act of consecration of Russia and Ukraine to Mary’s immaculate heart was “not a magic formula, but a spiritual act” that was taking place “even as bombs are destroying the homes of many of our defenseless Ukrainian brothers and sisters.”

The Ukrainian ambassador to the Holy See, Andrii Yurash, tweeted from inside the basilica his appreciation of the service, which he said was “another attempt to defend (Ukraine) from devil’s war.”

Russia’s ambassador to Italy, Sergey Razov, earlier in the day defended Russia’s “special military action” in Ukraine and said Moscow’s references to its nuclear arsenal in the past month were not a threat but “only a reflection on potential scenarios if Russian national security was put at risk.”

For some traditionalist Catholics, Francis’ pronunciation of Russia in the prayer, as well as his invitation for all the world’s bishops to join him, fulfills the original Fatima prophecy. Some quibbled over his inclusion of Ukraine, while others said the original call for Russia’s “conversion”—presumably to Catholicism—might well have been a priority for the Catholic Church in 1917 but was not a focus of the Vatican’s evangelization project now.

Soon after Francis announced his plans to hold the consecration prayer, Patriarch Kirill said he was inviting the Russian Orthodox to direct prayers to the Mother of God, too. Kirill has called for peace, but he has also seemingly justified the invasion by invoking Russia and Ukraine as “one people” and describing the conflict as a “metaphysical” battle.

The Rev. Stefano Caprio, a former Catholic missionary in Russia and a professor of Russian history and culture at the Pontifical Oriental Institute in Rome, said Kirill is hardly the most hawkish of Russian patriarchs and is presumably under pressure to toe the Kremlin’s official line.

But in comments to reporters this week, Caprio noted that the Catholic and Orthodox prayers being offered up Friday carry some significant ambiguities.