The crazy stories about St. Patrick that are actually true 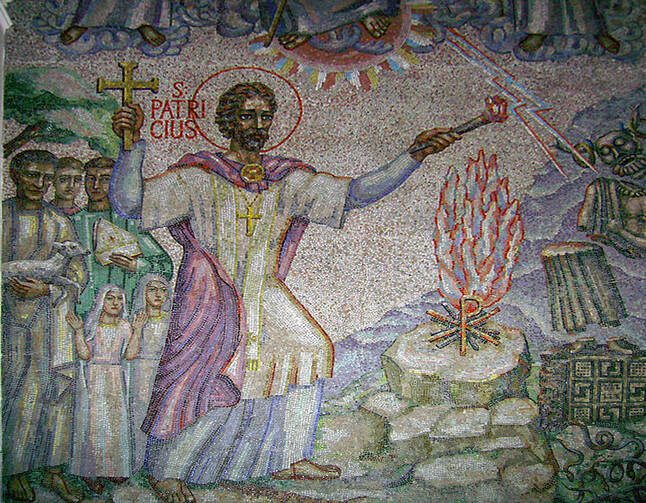 One of the great things about St. Patrick (and every other Irish saint, really) is that there are so many outlandish stories about them. Some of them you probably already know—like the old saw that the reason shamrocks are such a thing with the Irish is because St. Patrick used them to help the Irish understand the notion of the Trinity. One plant, three leaves—see, it actually does make sense!

The reason a four-leaf clover is considered such great luck is also that St. Patrick said if you found one you were actually the Second Coming of Christ.

Okay, no, he didn’t. But he could have! That’s how crazy some of the stories about him are.

As we celebrate this great man and country, let us take a moment to delight in some of the wonderful work of the Irish Catholic imagination.

Think about that. How scary do you have to literally frighten all of the snakes? It’s a lot.

St. Patrick drove out the snakes (but why not the crows?)

Maybe the most famous story of St. Patrick is that the reason that you can walk over hill and under dale throughout Ireland without fear of getting bitten, poisoned and/or swallowed is that St. Patrick had your back over a thousand years ago and drove all the snakes into the sea.

The actual legend is a little more complicated than that, and also establishes one of the main patterns in the legendary life of St. Patrick, which is that St. Paddy don’t play.

One Lent, St. Patrick decided to do a 40-day fast on top of a mountain in County Mayo, now known as Croagh Patrick. (And you thought giving up chocolate was a big deal.) From the moment he got there, he was harassed by crows. So many crows, in fact, that they blotted out the sky, the sounds of the world and probably also St. Patrick’s sanity the whole time. (This is the one part of the story that actually seems totally plausible.)

The crows were actually demons (no surprise there), but somehow St. Patrick kept right on praying and ringing a bell (because reasons?). At some point an angel showed up and said because of Patrick’s faithfulness his prayer would be answered: The Irish would be Christians until Judgment Day. (Except for the 10 percent who now identify with “no religion.”)

It sounds nice, right? But then St. Patrick comes down the mountain, sees the snakes. And his nerves are so completely fried by 40 days of a thousand shouting crows he takes off running and chases them all into the sea.

Think about that. How scary do you have to literally frighten all of the snakes? It’s a lot.

By his own account, sometimes when Patrick really wanted to shut his opponents down, he would raise people from the dead and have them testify to the truth of Christianity.

A lot of the legends around St. Patrick concern his epic ongoing fifth-century rap battle against the Druids, who had their own pantheon of gods and also occasionally liked a little human sacrifice on the side.

For instance, Ireland had this yearly festival that began with the Irish High King—I know, I’m thinking about Aragorn, too—lighting a fire at the Hill of Slane that would then be used to light all other fires. It’s actually very much like Catholics at the Easter Vigil.

But on this occasion, St. Patrick showed up and lit his own fire before the ceremony even got started. Not cool, bro.

Then on top of it, when the Druids tried to put it out, they couldn’t do it. And while there’s no description given of this fire, it was apparently big enough that the Druids returned to the king to tell him not only could they not shut it down, they were afraid it might burn down the whole world.

In the Catholic version of this story, the king acknowledges Patrick’s magic was stronger and supported his mission to convert Irish. In the pagan version, they just explain that when someone has the capacity to burn down your entire island, you pretty much let him have what he wants.

Remember that time when we were deer?

You know that famous poem, “St. Patrick’s Breastplate”? It, too, is connected to a pretty insane story: St. Patrick and a companion were on their way to preach at the Hill of Tara, which was really the holiest of holy places for the Druids—once again, when it comes to Druids St. Patrick just don’t play—when he realized that they were going to be ambushed.

Despite not being either natively Irish or a pagan, in the magical equivalent of stealing your opponent’s rhyme and using it against them, St. Patrick drew on a power called “féth fïada” that transformed him and his companion into wild deer and successfully hid them from their antagonists.

In another legend, Patrick preached for so long that his walking staff, which he had jammed into the ground, grew roots and turned into a real tree.

But arson and shape changing are really just the appetizers when it comes to St. Patrick’s audacious efforts to spit truth and drop evangelical haymakers.

By his own account, sometimes when Patrick really wanted to shut his opponents down, he would raise people from the dead and have them testify to the truth of Christianity. He brought people back to describe the torture of being able to see heaven and not be able to enter because you’re not baptized, or to paint a picture of the torments they had just been going through in Hell. In one case, he brought a guy back just to prove that the accusations his friends were making that St. Patrick was a thief were untrue. By his own account, in his lifetime he resurrected an astonishing 33 people.

Once, some people wise to Patrick’s moves claimed one of their friends was dead and begged Patrick to raise him. St. Patrick, who knew what they were about, prayed for the man and he actually died. Only after his friends begged for mercy and were baptized did Patrick bring him back from the dead.

In Celtic mythology there was a legendary hero called Oisín, a demigod warrior who was also thought to be the greatest poet of Ireland. At some point in the ancient past, Oisín fell in love with the goddess Niamh, who was one of the queens of the land of eternal youth (a.k.a. Tir na Nog). Without really even thinking about it, he ended up spending hundreds of years there with her, never getting older, having a great time.

But at some point he decided to go back to Ireland to see his friends. And he was stunned to discover everyone he knew had died, because that’s what happens to you when you’re not living in the land of eternal youth.

On top of it, Oisín could not actually touch the ground without immediately aging himself. So he rode around on a magical horse, which in my headcanon is definitely a purple sparkle pony that eventually gets a children’s TV show. Eventually, realizing he was riding through what for him was basically one big grave, he started back for Niamh.

On the way to Niamh, Oisín saw a man trying to lift a heavy stone and stopped to help. But halfway through, the strap on his saddle broke, he fell to the ground and immediately started aging.

Are you wondering how this relates to St. Patrick? I’m right there with you.

As Oisín lay there dying, St. Patrick walked by and decided to chat him up about their two religions and cultures. You know, as you do when a man is dying in front of you. In the end, St. Patrick won the debate and Oisín died. And despite the fact that Oisín had done nothing wrong, was just trying to help someone and had only come back to our reality in the first place because he missed his friends and wrote poetry that changed people’s lives, we’re supposed to feel okay with that.

In another legend, Patrick preached for so long that his walking staff, which he had jammed into the ground, grew roots and turned into a real tree. So who knows, maybe Oisín actually died from exhaustion.

Each St. Patrick’s Day at the very end of the night, a toast is offered to St. Patrick, in honor of his preferential option for the full pour.

For all his failings—wiping out an entire species of animal, purposely offending the religious customs of others—there is one truly great thing about St. Patrick: He insisted on a full pour.

Once upon a time at a pub, Patrick ordered a whiskey, but was shocked and offended when the bartender’s pour did not fill his glass. He said the man had a devil in his cellar feeding on his dishonesty, so he’d best get his act together. The man immediately changed his ways. Like Scrooge on Christmas Day, he became the guy who filled everyone’s glass to the rim.

Today that story is remembered in the “Drowning of the Shamrock.” Each St. Patrick’s Day at the very end of the night, shamrocks are dunked into the last round of drinks (ideally whiskey) and a toast is offered to St. Patrick, in honor of his preferential option for the full pour.

[Read next: “‘When Irish Eyes Are Smiling’: The history behind the song”]