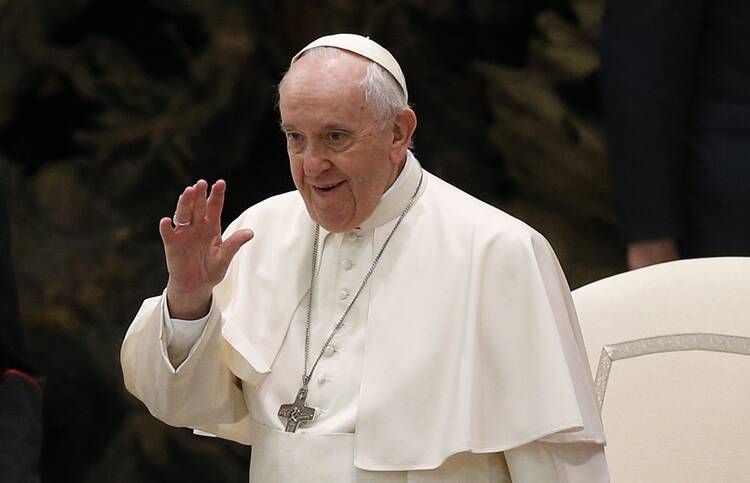 Pope Francis greets the crowd during his general audience in the Paul VI hall at the Vatican March 2, 2022. (CNS photo/Paul Haring)

Pope Francis attended Mass at the Jesuit Church of the Gesù in Rome to celebrate the 400th anniversary of the canonization of St. Ignatius Loyola, St. Francis Xavier, St. Teresa of Avila, St. Philip Neri and St. Isadore the Laborer. This is the homily he delivered:

Today’s Gospel of the Transfiguration presents us with four actions of Jesus. We would do well to dwell on them, in order to discover in these gestures clear directions for our own journey as his disciples.

The first verb, the first of these actions of Jesus, is to take with him. Luke tells us that Jesus “took with him Peter, James and John” (9:28). Jesus “takes” the disciples, and he ourselves as well, to be “with him”. Christ loved us, chose us and called us. Everything begins with the mystery of a grace, a choice, an “election”. The first decision was not ours; rather, Jesus called us, apart from any merit on our part. Before becoming men who make their lives a gift, we are persons who received a gift freely given: the free gift of God’s love. Our journey, brothers and sisters, needs to start anew each day from this initial grace. As he did with Peter, James and John, Jesus has called us by name and taken us with him. He took us by the hand. Where? To his holy mountain, where even now he sees us with himself forever, transfigured by his love. Grace, this first grace, leads us there.

So, when we feel bitterness or disappointment, when we feel belittled or misunderstood, let us not wander off into complaints or nostalgia for bygone times. These are temptations that block our progress, that lead us nowhere. Instead, let us take our lives into our hands, starting anew with grace, in fidelity to our calling. Let us accept the gift of seeing each day as a step along the way towards our ultimate goal.

The saints we commemorate today were pillars of communion. They remind us that, for all our differences of character and viewpoint, we have been called to be together.

Jesus took with him Peter, James and John. The Lord takes the disciples together; he takes them as a community. Our vocation is grounded in communion. To start anew each day, we need to experience once more the mystery of our election and the grace of living in the Church, our hierarchical Mother, and for the Church, our spouse. We belong to Jesus, and we belong to him as a Society. Let us never tire of asking for the strength to form and foster communion, to be a leaven of fraternity for the Church and for the world. We are not soloists in search of an audience, but brothers arranged as a choir. Let us think with the Church and reject the temptation to be concerned about our own personal success or attainments. Let us not allow ourselves to be sucked into a clericalism that leads to rigidity or an ideology that leads to divisiveness.

The saints we commemorate today were pillars of communion. They remind us that, for all our differences of character and viewpoint, we have been called to be together. If we will be forever united in heaven, why not begin here? Let us cherish the beauty of having been “taken”, brought together, called together, by Jesus. This is the first verb: take.

A second verb is go up. Jesus “went up the mountain” (v. 28). Jesus’ path is one of ascent, not descent. The light of the transfiguration is not seen on the plain, but only after a strenuous ascent. In following Jesus, we too need to leave the plains of mediocrity and the foothills of convenience; we need to abandon our reassuring routines and set out on an exodus. Jesus, after going up the mountain, speaks to Moses and Elijah precisely about the “exodus, which he was to accomplish in Jerusalem” (v. 31). Moses and Elijah had gone up to Sinai or Horeb after two “exodus” experiences in the desert (cf. Ex 19; 1 Kings 19); now they speak with Jesus about the definitive exodus, that of his Pasch. Brothers and sisters, only the ascent of the cross leads to the goal of glory. This is the way: from the cross to glory. The worldly temptation is to seek glory in bypassing the cross. We would prefer paths that are familiar, direct and smooth, but to encounter the light of Jesus we must continually leave ourselves behind and follow him upwards. The Lord who, as we heard, first “brought Abraham outside” (Gen 15:5), also invites us to move outwards and upwards.

For us Jesuits, this journey of moving outwards and upwards follows a specific path, nicely symbolized by the mountain. In Scripture, mountain peaks represent the extremity, the heights, the border between heaven and earth. We are called to go precisely there, to the border between heaven and earth where men and women “confront” God with their difficulties, so that we in turn can accompany them in their restless seeking and their religious doubt. That is where we need to be, and to do so, we have to go outwards and upwards. The enemy of human nature would persuade us to keep to the path of empty but comfortable routines and familiar landscapes, whereas the Spirit impels us to openness and to a peace that never leaves us in peace. He sends disciples to the utmost limits. We need think only of Francis Xavier.

We are called to go precisely there, to the border between heaven and earth where men and women “confront” God with their difficulties.

In this journey, in following this path, I think of the need to struggle. Think of poor old Abraham, there with his sacrifice, fighting off the birds of prey that would devour it (cf. Gen 15:7-11). With his staff, he chases them away. Poor old man. Let us think about this: struggling to defend this path, this journey, this, our consecration to the Lord.

In every age, Christ’s disciples find themselves before this crossroads. We can act like Peter, who responds to Jesus’ prediction of his exodus by saying, “It is good to be here” (v. 33). This is the risk of a static faith, a “neatly parked” faith. I dread this kind of “parked” faith. We risk considering ourselves “respectable” disciples, but are not in fact following Jesus; instead, we passively stay put, and, without realizing it, doze off like the disciples in the Gospel. In Gethsemane too, the same disciples would fall asleep. Let us think, brothers and sisters, that for the followers of Jesus, now is not a time for sleeping, for letting our souls be sedated, anesthetized by today’s consumerist and individualistic culture, by the attitude of “life is good as long as it’s good for me”.

In that way, we can continue speak and theorize, while losing sight of the flesh of our brothers and sisters, and the concreteness of the Gospel. One of the great tragedies of our time is the refusal to open our eyes to reality and instead to look the other way. Saint Teresa helps us to move beyond ourselves, to go up the mountain with the Lord, to realize that Jesus also reveals himself through the wounds of our brothers and sisters, the struggles of humanity, and the signs of the times. Do not be afraid to touch those wounds: they are the wounds of the Lord.

The Gospel tells us that Jesus went up the mountain “to pray” (v. 28). This is the third verb: to pray. “And as he was praying, the appearance of his countenance was altered, and his clothing became dazzling white” (v. 29). The Transfiguration was born of prayer. Let us ask ourselves, even after many years of ministry, what does it mean today for us, for me, to pray? Perhaps force of habit or a certain daily ritual has led us to think that prayer does not change individuals or history. Yet to pray is to change reality. Prayer is an active mission, a constant intercession. It is not distant from the world, but changes the world. To pray is to bring the beating heart of current affairs into God’s presence, so that his gaze will shine out upon history. What does it mean for us to pray?

Pope Francis: “To pray is to change reality...How are we bringing the present war to our prayers?”

We would do well today to ask ourselves if prayer immerses us in this change. Does it shed new light upon others and transfigure their situations? For if prayer is living, it “unhinges” us from within, reignites the fire of mission, rekindles our joy, and continually prompts us to allow ourselves to be troubled by the plea of all those who suffer in our world. Let us also ask: how we are bringing the present war to our prayers? We can look to the prayer of Saint Philip Neri, which expanded his heart and made him open his doors to the street children of the Rome of his time. Or to that of Saint Isidore, who prayed in the fields and brought his farm work to his prayer.

Taking up each day anew our individual calling and our community history; then going up towards the heights that God points out to us; and praying in order to change this world in which we are immersed.

Yet there is also a fourth verb, which appears in the last verse of today’s Gospel: “Jesus remained alone” (v. 36). He remained, while everything else passed away except for the echo of the Father’s “testimony”: “Listen to him” (v. 35). The Gospel concludes by leading us back to what is essential. We are often tempted, in the Church and in the world, in our spirituality and in our society, to give primary importance to many secondary needs. It is a daily temptation to make any number of secondary needs primary. In a word, we risk focusing on customs, habits and traditions that set our hearts on passing things and make us forget what remains. How important it is for us to work on our hearts, so that they can distinguish between the things of God that remain, and worldly things that pass away!

Dear brothers and sisters, may our holy father Ignatius help us to preserve discernment, our precious legacy, as an ever timely treasure to be poured out on the Church and on the world. For discernment enables us to “see anew all things in Christ”. Indeed, discernment is essential, so that, as Saint Peter Faber wrote, “the good that can be achieved, thought or organized, may be done with a good, not a malign, spirit” (cf. Memorial, Paris, 1959, n. 51). Amen.