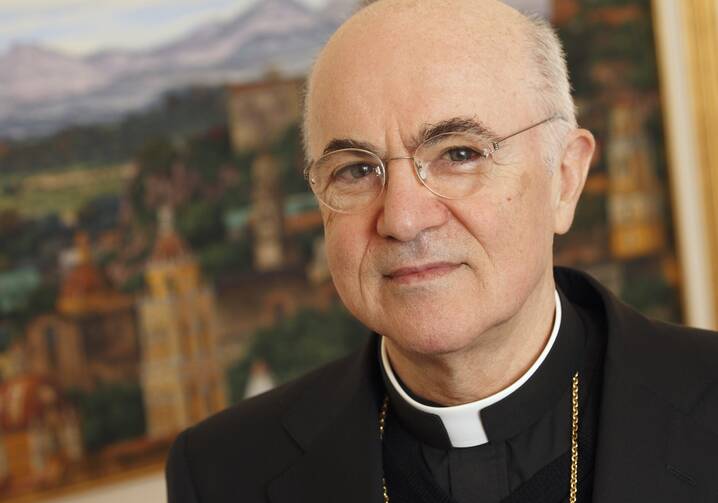 Italian Archbishop Carlo Maria Vigano, former apostolic nuncio to the United States, is pictured at his residence at the Vatican in this Oct. 20, 2011, file photo. (CNS photo/Paul Haring)

“The United States of America and the European States must not marginalize Russia but build an alliance with it, not only to restart trade for the prosperity of all, but in lieu of the reconstruction of a Christian Civilization, which will be the only one able to save the world from the transhuman and medical-technical globalist monster,” the archbishop wrote in his nearly 10,000 word letter.

The archbishop, once the papal nuncio to the United States among other countries, has a keen understanding of what happens in rooms of power and influence, but since accusing Francis of covering up allegations of sex abuse against disgraced ex-cardinal Theodore McCarrick, going so far as to ask for the pope’s resignation in 2018, Viganò has been welcomed into the ranks of a small but outspoken Catholic conservative right. His rhetoric has increasingly leaned on anti-migrant, anti-vaccine and pro-Trump takes.

The archbishop said in his letter that Putin has been cornered by an aggressive NATO, backed by the United States, which is seeking to escalate the conflict for its own gains. “This is the trap for Russia just as much as Ukraine, using both to allow a globalist elite to bring its criminal plot to fruition,” Viganò wrote.

So-called democratic states, according to Viganò, have imposed “censure and intolerance” over dissenting opinions. The pandemic has exacerbated this dynamic, the archbishop said, adding that global media outlets “shamelessly lied” with the cooperation of governments and the Catholic hierarchy.

The archbishop said in his letter that Putin has been cornered by an aggressive NATO, backed by the United States, which is seeking to escalate the conflict for its own gains.

Viganò said the “ostracism” of those who have opposed the administration of COVID-19 vaccines was similar to the treatment reserved for those who refuse to call Putin an “invader” or “tyrant.”

The Vatican has repeatedly dismissed objections to the vaccines based on their development or testing with stem cell lines original drawn from aborted fetal cells. Pope Francis has joined global pro-vaccine campaigns, calling getting the shot “an act of love.” The Pontifical Academy for Life, a Vatican think tank charged with promoting life from conception to natural death, has come forward numerous times encouraging Catholics to get the vaccine.

Viganò adopted Russian President Vladimir Putin’s justifications for attacking Ukraine, lamenting the lack of media coverage of supposed neo-Nazi groups in Ukraine that have allegedly attacked Russian-speaking Ukrainians in the autonomous eastern Ukrainian regions of Donetsk and Luhansk. Ukrainian President Volodymyr Zelenskyy has ridiculed the idea that Nazism is behind the eight-year-old conflict in his country’s east, which Russia invaded in 2014.

The letter was the second defense of Russia’s invasion to be floated by a prominent churchman in recent days. In a sermon on Sunday, Patriarch Kirill of Moscow, the head of the Russian Orthodox Church and an ally of Putin, repeated a long-held contention that the West wants to enforce the practice of holding gay pride parades as a test of loyalty to its values, which include the acceptance of homosexuality. The Ukraine war, he said Sunday, resulted from the eastern regions’ refusal to acquiesce.

Viganò said the “ostracism” of those who have opposed the administration of COVID-19 vaccines was similar to the treatment reserved for those who refuse to call Putin an “invader” or “tyrant.”

But Viganò sees a deeper plot to institute a new world order. Naming the United Nations, NATO and the International Monetary Fund as well as the European Union and billionaire philanthropists like George Soros and Bill Gates, the archbishop identified a global conspiracy, initiated by an American deep state, to introduce a world government based on economic interests and progressivism.

“The image of Zelenskyy is an artificial product, a mediatic fiction, an operation to manipulate consensus that was nonetheless able to create a political character in the Ukrainian collective imagination and who in reality, not in fiction, was able to seize power,” the former Vatican envoy wrote of the Ukrainian president, who is Jewish.

Calling Ukrainians “hostages” of the globalist totalitarian regime, he advised them against joining the E.U. Instead, Viganò wrote, European nations must seek their independence by finding once more their “sovereignty, their identity, their faith. Their soul.”

Nonetheless, the archbishop urged Russian President Vladimir Putin to “turn the tables” on the “globalist ploy” by offering Ukraine a peaceful way out. “The more Putin believes (himself) to be right, the more he will prove the greatness of his nation and the love for his people by not giving into provocations,” he added.