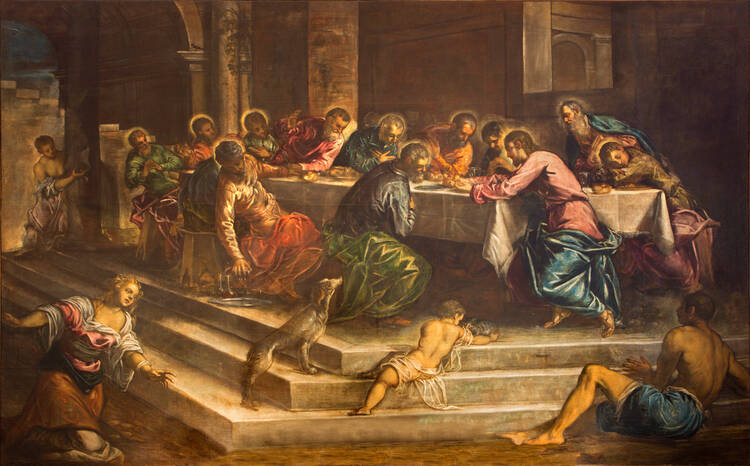 A Reflection for the Saturday after Ash Wednesday

In Lent, we often ask ourselves, “What will I give up?” We default to denying ourselves something enjoyable or even important in our lives. I once abstained from the Eucharist during Lent in order to intentionally reflect on the mystery of the sacrament and hopefully reignite my spiritual hunger for God.

One of the biggest stories we covered over the past year was the infamous Communion war—a raucous debate over whether or not priests should deny the Eucharist to President Joe Biden. The second Catholic president in U.S. history is a regular Massgoer. According to the head of the U.S. bishops’ conference, some of Mr. Biden’s political positions advance moral evils and threaten human life and dignity, namely in the areas of abortion, contraception, marriage and gender. That’s very serious.

So, it is understandable that some Catholics would adopt an attitude of protectionism and argue for denying him the Eucharist. It was a noble compulsion: to protect the integrity of the sacrament that is so central to the life of the Catholic community and a corporeal connection to Christ. And yet, this drive to arbitrate the altar conflicts, ironically enough, with another cornerstone of the Catholic faith, namely Jesus’ own ministerial practices around meals as described in the Gospels.

Jesus did many things to unsettle the religious authorities of his day. But the one that got him killed was eating with tax collectors and sinners.

Jesus did many things to unsettle the religious authorities of his day. But the one that got him killed was eating with tax collectors and sinners. We hear about one of these encounters in today’s Gospel.

Tax collectors and sinners were not individuals who periodically slipped up by skipping synagogue, lying to a spouse or wishing harm on their neighbor. These were individuals who deliberately made life decisions and pursued occupations that set them outside the established moral norms of the community. They were deemed outcasts and totally unacceptable in sacred spaces like the temple.

In today’s Gospel, we see the impulse of the Pharisees and scribes to protect the sanctity of sacred spaces and the entire community on full display. Yet this story, and so many others like it in the Gospels, is about how Jesus challenged that prevailing attitude and system by leaving the confines of sacred space to eat and drink with the unclean, the unworthy, the broken—people like Levi.

Jesus’ pastoral strategy was so creative: Instead of hosting an exclusive meal and guarding the door against sinners, he went to where sinners were. We can only conclude from stories like this one in Luke 5 that Jesus would have eaten with anybody! But why? It seems that he believed that grace operates in such encounters. Our faith is built on the witness that grace did operate in those encounters.

If Catholics want to protect the integrity of the Eucharist, then studying Jesus’ habits around the dinner table, written plainly on the pages of the Gospels, is a good place to start.

I mentioned that the impulse to protect the integrity of the Eucharist—Jesus really present to us—is a noble one. Maybe President Biden should be denied Communion, or maybe he shouldn’t. But if Catholics want to protect the integrity of the Eucharist, then studying Jesus’ habits around the dinner table, written plainly on the pages of the Gospels, is a good place to start.

I don’t intend to abstain from the Eucharist this Lent. Instead, I will be praying for the grace to be more like Jesus and expanding my dinner table.

I’m not giving up anything. Instead I plan to attend the Traditional Latin Mass in my local community, which I never do, and try to build new relationships.

Not usually. As Augustine wrote, total abstinence is easier than perfect moderation.

I have transitioned to almost 100 percent vegan, so the list could go on and on. A real comfort food for me is a vegan burrito bowl with rice cooked with diced tomatoes, chili powder and cayenne, together with black beans, fajita veggies, an avocado and topped with cilantro and lime juice.