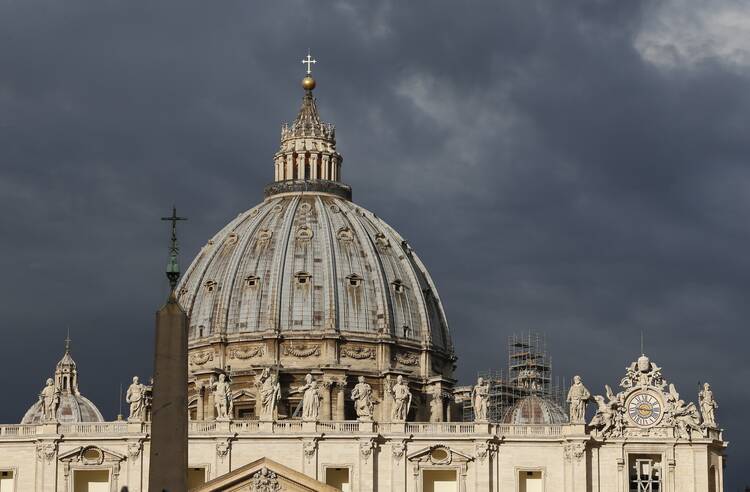 St. Peter's Basilica is seen at the Vatican in this Oct. 9, 2017, file photo. On Feb. 14, 2022, Pope Francis split the Congregation for the Doctrine of the Faith into two main sections: doctrine and discipline. (CNS photo/Paul Haring)

In an important move, Pope Francis has issued a decree, published “motu proprio” (on his own initiative), in which he has modified the internal structure of the Congregation for the Doctrine of the Faith.

At present, the congregation is composed of two sections—doctrinal and discipline—but it has only one secretary and two adjunct secretaries. Francis has decided to give each section a secretary, thereby reaffirming the important but distinct work of each of the two sections. One Vatican source, who asked not to be identified because he was not authorized to speak, told America, “Francis wants the congregation to have two lungs and for each to function well.”

Pope Francis has issued a decree, published “motu proprio” (on his own initiative), in which he has modified the internal structure of the Congregation for the Doctrine of the Faith.

The Vatican published the two-page decree in Italian on Feb. 14. Pope Francis has given it the Latin title “Fidem Servare” (“Preserving the Faith”) and said “this is the main task and the ultimate criterion to be followed in the life of the church.” He said the congregation “takes on this important commitment, by assuming both the doctrinal and disciplinary competences, that was given to them by my venerable predecessors.”

Pope Francis issued the decree today, another source who was not authorized to speak told America, because he is aware of the major problems facing not only the discipline section but also the doctrinal section of the C.D.F. and wished the changes to take effect immediately without waiting for the publication of the constitution for the reform of the Roman Curia. America has learned that the constitution is currently being translated and is expected to be published soon after Easter, probably in early May.

Pope Francis is expected to appoint two new secretaries to the C.D.F. soon, one for each section. Several sources told America that he is also expected to replace Cardinal Luis Ladaria, the current prefect of the C.D.F., who will turn 78 in April and complete his five year term at the end of June.

Pope Francis issued the decree today, a source told America, because he is aware of the major problems facing not only the discipline section but also the doctrinal section of the C.D.F.

The congregation originated in 1542 and was known as “La Suprema” (“The Supreme”) congregation in the Roman Curia because the pope was its head, though he ordinarily exercised his leadership through the cardinal secretary—until 1965. Originally called the Congregation of the Holy Roman and Universal Inquisition, the congregation has exercised enormous influence and control in the church for centuries, not only over faith and morals, including heresy, schism and particular sins, but also over theologians and their writings, as well as over the nomination of bishops, rectors and professors of Catholic universities, and senior officials in the Vatican. A negative opinion from the C.D.F. could end the possibility of a cleric being appointed bishop or of a man or woman being nominated as rector, professor or official at different levels in the church. It could also lead to their removal from such positions.

Paul VI decreed the present structure of the congregation and changed its name to the Congregation for the Doctrine of the Faith with the decree “Integrae Servandae” in 1965. Paul VI also decreed that the leadership of the congregation no longer be reserved for the pope but entrusted to a cardinal, like all the other Roman congregations. Francis retains this.

Pope Francis said that having reviewed the experience that “matured” in the different areas of the C.D.F.’s work, and noting the need to give it an approach more suited to fulfilling its proper functions in today’s world, he has decided to make the following changes.

Originally called the Congregation of the Holy Roman and Universal Inquisition, the congregation has exercised enormous influence and control in the church for centuries.

First, the new decree makes clear that the C.D.F. will be headed by a prefect and that the discipline and doctrinal sections will be led by their own secretary.

The decree states: “The doctrinal section deals with matters pertaining to the promotion and protection of the doctrine of faith and morals. It also promotes studies aimed at increasing the understanding and transmission of the faith at the service of evangelization, so that its light may be a criterion for understanding the meaning of existence, especially in the face of the questions posed by the progress of the sciences and the development of society.”

This second sentence is particularly significant, according to the first Vatican source mentioned above. He said Pope Francis makes clear that he wants the doctrinal section to reflect on particular questions regarding “the meaning of existence” and faith that are “posed by the progress of sciences and the development of society.” Some sources in Rome think L.G.B.T. issues could be among these questions.

Pope Francis wants the doctrinal section to reflect on particular questions regarding “the meaning of existence” and faith that are “posed by the progress of sciences and the development of society.”

The decree also states that “as regards the faith and customs,” the doctrinal section is to examine documents to be published by other dicasteries, as well as writings and opinions “that appear problematic for the correct faith, encouraging dialogue with their authors and proposing suitable remedies” according to the norms set out in “the regulations for doctrinal examination” issued by the C.D.F. under Cardinal Joseph Ratzinger in July 1997.

The decree says the doctrinal section is also entrusted with the task of studying questions concerning the personal ordinariates of former Anglican clergy seeking to enter into full Communion with the Catholic Church through the apostolic constitution “Anglicanorum Coetibus” issued by Pope Benedict XVI in 2009.

The doctrinal section will also be responsible for the marriage office, which concerns the so-called privilegium fidei that examines the dissolution of marriage between two non-baptized persons or between a baptized person and a nonbaptized person.

The discipline section is concerned with crimes “reserved to the jurisdiction of the Congregation,” including clerical sexual abuse cases, and “which are adjudicated by the Supreme Apostolic Tribunal established therein.” The section has the duty of “preparing and implementing the procedures foreseen by the canonical norms so that the Congregation, through its various offices…can promote a correct administration of justice.”

Then, in a new important addition to the task of the discipline section, it gives it the task of training bishops and canon lawyers in this field. The decree states that to ensure a correct administration of justice, “the disciplinary section promotes appropriate formation initiatives,” which are offered to bishops and legal practitioners, “in order to foster a correct understanding and application of the canonical norms related to its area of competence.”

Article 4 of the decree recalls that the congregation possesses an archive for “the preservation and consultation of documents,” which also maintains the historic archives of the former Holy Office and of the Index.

Francis concludes the decree by stating that all reforms come into force on Feb. 14 with the decree’s publication in L’Osservatore Romano. It will also be published in Acta Apostolicae Sedis, the official gazette of the Holy See.

Correction, Feb. 14, 2022: A quote from Vatican News has been deleted from this story as it could lead to a misunderstanding of the aim of the decree.