After Munich abuse report, Cardinal Marx to remain in office—for the time being 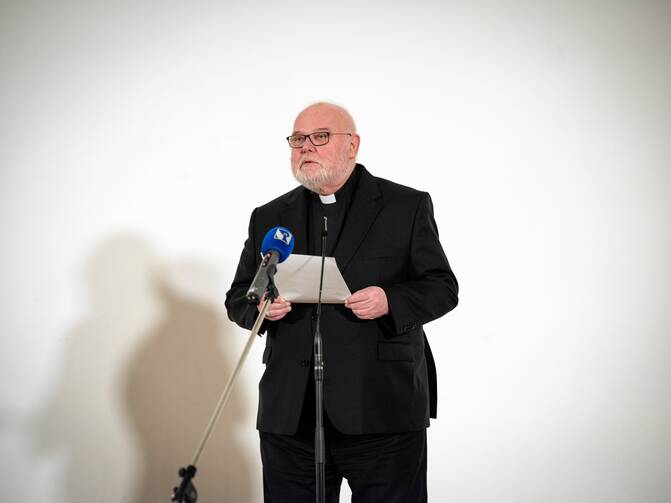 German Cardinal Reinhard Marx of Munich and Freising gives a statement on the Munich abuse report to the media Jan. 20, 2022, in Munich. (CNS photo/Dieter Mayr, KNA)

Munich (KNA) — Munich Cardinal Reinhard Marx has said he wants to remain in office – at least for the time being. “I am not clinging to my office,” he said in a news conference in Munich on Thursday, adding: “The offer to resign last year was meant very seriously. Pope Francis decided otherwise and asked me to continue my ministry responsibly.”

Responding to a follow-up question, he said he had not spoken to the pope again about resigning, which in his view would be more like “fleeing” at the moment. But he would still be prepared to do so. If he or others should get the impression that he would be “more of an obstacle than a help” in the reappraisal efforts, he would approach the relevant advisory bodies.

Marx declined to give an assessment of the role of former pope Benedict XVI in the abuse scandal. “I accept that he interprets the facts differently here, that he regrets, and I think he will comment on this as a whole,” Marx said.

“I am not clinging to my office,” Marx said in a news conference in Munich on Thursday, adding: “The offer to resign last year was meant very seriously.”

The report by the law firm Westpfahl Spilker Wastl accuses the former head of the church of misconduct in four cases during his tenure as archbishop of Munich (1977-1982). Benedict XVI denies this.

Marx said the report was “not a court verdict,” especially with regard to a man's life achievement. But it was an “important building block.” He said it was good that the pope emeritus had declared his willingness to contribute to the investigation.

Regarding his own role as archbishop, Marx said that he bore responsibility for the actions of the archdiocese, including the failure to deal with abuse. For the future, he wanted to take the steps “that need to be taken for a more reliable reappraisal, for even greater attention to the victims and for a reform of the church.”

Marx repeatedly emphasized that he had also made mistakes himself. The biggest fault was to have overlooked the victims. “That is unforgivable. There was no real interest in their suffering on our part. In my opinion, this also has systemic reasons, and at the same time I bear moral responsibility for this as the incumbent archbishop.”

Marx said the report was “not a court verdict,” especially with regard to a man’s life achievement. But it was an “important building block.”

At the same time, the cardinal rejected accusations that he had delegated the issue too much. “Dealing with abuse in the church was and is a matter of top priority for me and does not run counter to the mandate to spread the gospel. I was not and am not indifferent. Could I have acted more and with more commitment? Certainly yes!”

Marx again apologized to the victims “personally and also on behalf of the archdiocese.” He also apologized to the faithful “who doubt the church, who can no longer trust its leaders and whose faith has been damaged. We also failed for too long to pay enough attention to the parishes where offenders were employed.”

Meanwhile, Munich’s highest church judge, Lorenz Wolf (66), has announced that he was standing down from all his offices and duties. Marx said: “I agree with that. He will state his position in due course.”

Wolf is one of the most influential clerics in Bavaria. In addition to his functions in the archdiocese of Munich and Freising he heads the catholic office, the church's interface with the Bavarian government. He also chairs the broadcasting council of regional public broadcaster Bayerischer Rundfunk (BR). Some members of the council have called on him to resign in recent days. As a judge, Wolf has been responsible for church jurisdiction in the archdiocese since 1997.

The report by the law firm Westpfahl Spilker Wastl (WSW) said Wolf’s actions in 12 of 104 cases “give rise to criticism.” Wolf refrained from commenting on the individual cases, but hired lawyers who publicly doubted the legitimacy of the investigation. The main criticism in the experts’ report is that Wolf put the interests of the accused before those of the alleged victims in dealing with abuse cases.
More: Sexual Abuse / Europe / Bishops