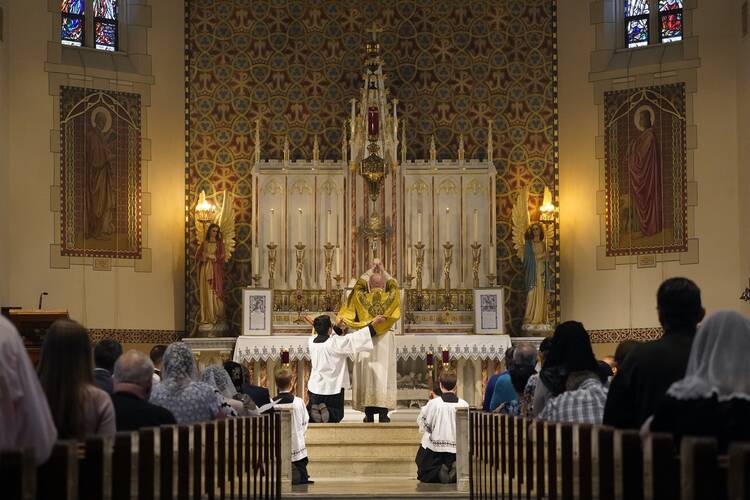 The Archdiocese of Chicago issued new rules on Monday aimed at regulating the use of the Latin Mass, the latest diocese to respond to a Vatican directive that seeks to limit its use in order to foster liturgical unity among Catholics. Pope Francis and other church leaders have warned that some movements promoting the Latin Mass have undermined church unity in recent years.

“I invite you to join me in seizing this moment as a fresh opportunity for us as pastors to promote unity within the life of the Church,” Cardinal Blase Cupich wrote in a Dec. 27 letter to Chicago priests that accompanied the directive.

The new policy instructs priests who currently celebrate a form of the Mass, sometimes called the Latin Mass or Tridentine Mass, which was supplanted with the reforms of the Second Vatican Council, to request permission from the archbishop if they wish to continue using the extraordinary form. The policy states that those making a request must provide attendance figures to the archbishop, and it places limits on where the older form of the Mass can be celebrated. Quoting recent directives from the Vatican, the policy also notes that even if permission to celebrate the Latin Mass is granted by the archbishop, those celebrations should not be included in the parish Mass schedule and they should not be celebrated at the same time as other parish activities.

Chicago priests permitted to celebrate the Latin Mass under the new rules will be required to use the more widespread form of the Mass, called the novus ordo, on the first Sunday of each month, as well as for celebrations on Christmas, the Triduum, Easter Sunday and Pentecost Sunday. Additionally, the policy states that priests must receive permission to celebrate Masses ad orientem, when priests pray with their backs to the congregation during certain parts of the Mass. Further, when Masses are celebrated in Latin, readings must be proclaimed in the vernacular.

At least a handful of parishes in the Chicago archdiocese regularly offer the extraordinary form of the Mass. In his letter, Cardinal Cupich encouraged priests to exercise “pastoral sensitivity” with Catholics who are devoted to the Latin Mass, urging ministers “to assist these brothers and sisters in coming to an appreciation that the reformed liturgy continues to embody the spiritual depth of the earlier liturgy and that it has been enhanced by the restoration of elements in the tradition which had become underemphasized.”

Tying the new rules to the Eucharistic revival recently launched by U.S. bishops, Cardinal Cupich wrote, “My intention in sharing this policy is to encourage you to reflect on the duty we each must assist our people in this moment of Eucharistic revival by rediscovering the value of the liturgical reform in the rites given to us by the Second Vatican Council.”

In his letter, Cardinal Cupich encouraged priests to exercise “pastoral sensitivity” with Catholics who are devoted to the Latin Mass.

Pope Francis issued a motu propio in July calling for further restrictions on the Latin Mass, the use of which nearly disappeared following reforms in the 1960s. Pope John Paul II, and later Pope Benedict XVI, each loosened restrictions on its use in later years. Earlier this month, the Vatican’s Congregation for Divine Worship responded to a set of questions about the July motu propio.

A Vatican official said earlier this year that movements in France, England and the United States heavily promoting the Latin Mass had tried to undermine church unity.

In November, Cardinal Cupich published an essay for America arguing that the restrictions on the Latin Mass are necessary to rein in a movement that critics say seeks to undermine the reforms of the Second Vatican Council.

“Sadly, there is ample evidence that many of those rejecting the reformed liturgy in earlier and even later years also expressed opposition to the council and its teachings,” the cardinal wrote, “including those on the nature of the church, the modern world, religious freedom, ecumenism and interreligious dialogue; nor were these objections restricted to the ways those teachings were being interpreted.”

Michael J. O’Loughlin is the national correspondent for America and host of the America podcast Plague: Untold Stories of AIDS and the Catholic Church.