The debate over Pete Buttigieg’s paternity leave is missing one thing: the birth mother 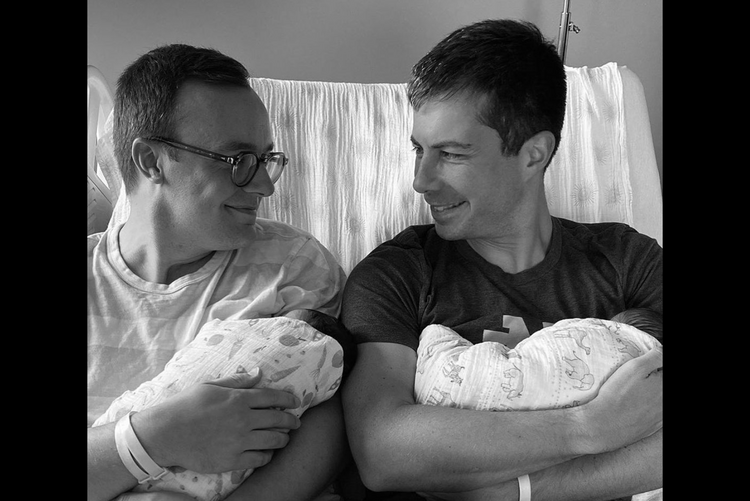 On Sept. 4, Secretary of Transportation Pete Buttigieg posted a picture on Instagram of his husband, Chasten, and their two newly adopted twins, Penelope Rose and Joseph August (Pete Buttigieg Instagram)

In early October, the news cycle gave birth to a giant red herring, and all the country’s most prominent talking heads have been dining out on it since.

I am talking about Pete Buttigieg’s paternity leave. He and his husband announced in August that they had become parents of newborn twins in October, social media went bonkers with the news that Mr. Buttigieg, who is the secretary of transportation for the Biden administration, had been on paid paternity leave for two months and has only recently returned to work.

I say that the question of paternity leave is a red herring, but do not mistake me: I am not saying it is not a big deal. I know firsthand how desperately new moms need help (and how capable men are of bonding with newborns). Sometimes I hear friends complain that their husbands only had a week or two off after the birth of a child, or maybe they even had to use their vacation days. I nod sympathetically and zip my lips, remembering the time I persuaded my ob-gyn to induce labor on a Friday so my husband could be with me for the luxurious span of Saturday and Sunday. That was the time he had off: 48 hours a week. Period.

I say that the question of paternity leave is a red herring, but do not mistake me: I am not saying it is not a big deal.

The nurses would always ask me what my postpartum support network looked like, and I would tell them, “Nothing.” They would look sad, and that was as far as it went. So you do not have to convince me: A world where moms and dads and babies can be together and rest? That would be very good indeed.

But it is peculiar to see the Buttigieg discourse swirl around the question of paternity leave when a close look will reveal that it is really about so many other things, and that is why people are getting so mad about it.

First, of course, it is because Mr. Buttigieg is gay, as Tucker Carlson so incisively noticed. More than that: He is gay and kind of boring, and some Americans have no idea how to process that combination. So they get mad.

Second, we are talking about paternity leave, but we are really talking about the rights of workers in general, about whether even people in thankless jobs should expect to have full lives or if it is reasonable for them to owe their soul to the company store. We are clearly in the early stages of some kind of cultural spasm regarding labor, and it is not clear if we are going to slide right back into the status quo ante, or if there is some real transformation afoot. That is scary, and scary things also make us mad.

It is peculiar to see the Buttigieg discourse swirl around the question of paternity leave when a close look will reveal that it is really about so many other things.

Third, we are also talking about paternity itself, fatherhood, manhood. Lord, do we have some sorting to do on this. One writer opined on Twitter that there is not much for a dad to do when there is a newborn in the house, and babies do not care either way. It is an old but often true trope that the men who sneer at hands-on dads are often secretly grieving that their own dads never had the time for them, and that is why they care so much. In any case, it is harder than it ought to be to step away from what is familiar, and being asked to do so makes us mad. So now we are mad about fatherhood, too.

The White House arguably degraded the discourse further by calling Mr. Buttigieg a “role model” for taking two months off in the middle of an economic crisis. Press Secretary Jen Psaki probably meant something more like an “aspirational example,” but her words came off as critical of dads who cannot take time off, especially since Mr. Buttigieg is undeniably part of privileged sliver of society with the money and access to choose when and how to start a family.

So there is all this stuff: about sexuality, class, money, work, fatherhood, legislation and so on. But do you know what has not been talked about at all?

Do you know what has not been talked about at all? The mother. The woman who gave birth to her two little ones two months ago and then said goodbye.

The mother. The woman who gave birth to her two little ones two months ago and then said goodbye. That is what I am here to do: talk about her.

She is likely staying out of the limelight by choice. I can only imagine how awful people would be if they knew her name and face. But it worries me to my soul to see all the discussion swirl around whether or not two men should have two months off to care for their babies, and no discussion at all about what their birth mother should have.

It is not clear whether the children joined the Buttigieg family through surrogacy, which is inherently exploitative, or adoption, which can be a profound act of love but is often more psychologically fraught than people want to acknowledge. Either way, I find myself shocked at how little I have even considered the woman. It has been too easy to forget that she even exists. That she, a mere two months after giving birth to a daughter and a son, is probably still sore, maybe still bleeding, still suffering through strange hormonal tides and surges, and nobody at all is talking about how much time she needs. She, who made these children. The only reason we are having the conversation at all is because she exists.

I want to be very careful here. It is not hard when you are crafting rhetoric to create a phantom victim out of whole cloth and rage in righteous anger against her exploitation—and so, in the process, to exploit her again. I have no idea who she is, what she has been through, why or how she came to work with Pete Buttigieg, how she was compensated, how or if she is being cared for or how she is recovering physically or psychologically from giving birth to and giving over her two children. I do not know the first thing about her, and she deserves her privacy.

When you are charging ahead in the momentum of some righteous cause, remember to look over your shoulder and see who has been left behind.

I just want us to remember that she exists. And it is weird that we are all acting like everything else is the main point, when none of this could possibly have happened without her nine months of work and who knows how many hours of labor and two months now of what can only be some kind of loss.

It is weird that we are all so comfortable with having these conversations about childbirth, and women do not even enter into it, except as a reflection of whether or not someone’s manhood is impugned. It is far too easy to use women and simultaneously pretend they do not exist. It is far too easy to make women do what only women can do and then act like there is no such thing.

I do not have a call to action, a petition to sign, legislation to back or talking points to consider. I just have a warning: Be careful, people of good will. Be careful where your outrage leads you. Be careful where your compassion leads you, too. When you are charging ahead in the momentum of some righteous cause, remember to look over your shoulder and see who has been left behind.