Daniel Pérez had a transformative experience as a Nativity student. Today he leads their national coalition of schools. 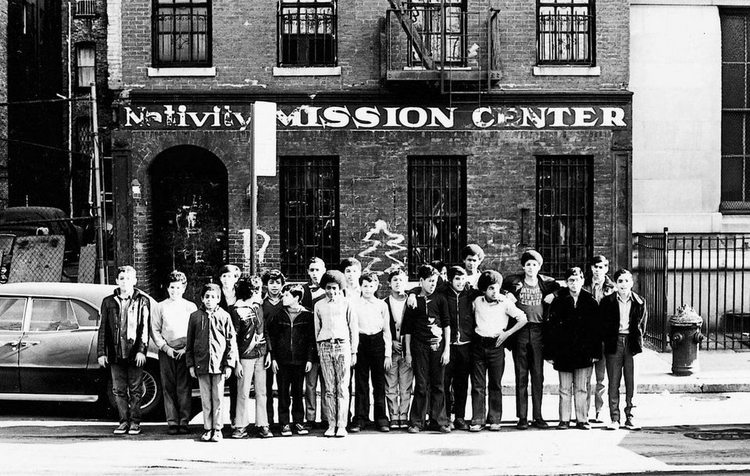 Nativity Mission Center, pictured here in the 1970s,  was founded by the Jesuits in 1971 on the Lower East Side of Manhattan. The center is now part of a coalition of 49 schools across the United States that follow its model for educating underserved children. (Photo courtesy NativityMiguel Coalition.)

In no small way, the absence of girls at Nativity Mission Center in lower Manhattan dampened Daniel Pérez’s interest in enrolling. On top of that, he would have to stay at school until later in the day—4 or 5 p.m. At the Catholic school he had been attending since kindergarten, he was released at 2:30 p.m. And yes, unlike at Nativity, there were girls there.

That’s not to mention the seven weeks of summer camp students attended to teach them independence and to keep them out of trouble over the break. Mr. Pérez, a New Yorker by birth, had no interest in leaving the city for the wilderness—and certainly not for that much time.

Mr. Pérez is now the executive director of the NativityMiguel Coalition, a national network of faith-based schools.

Still, his friends who began attending Nativity as sixth graders wouldn’t stop talking about it. So his parents enrolled him in what was then called the Brother Lawrence program, a special process for new applicants. Every Saturday, from October through April, applicants would go to Nativity for a couple hours for math lessons, to read books as a group and to socialize. The program gave both prospective students and teachers the chance to evaluate each other. Mr. Pérez was invited to camp that summer and enrolled in the school as a seventh grader shortly thereafter.

“Looking back at it, I would say it’s the transformative experience of my life,” Mr. Pérez told America of spending seventh and eighth grade at Nativity. “The Nativity model provides students and families a second home, and in some cases, a first home.”

The Jesuit-run middle school, which serves immigrant and generationally impoverished communities, would open at 7:15 a.m. and have breakfast available. Students were in class from 8 a.m. until 3 p.m., with study hall going until 4:30 p.m. Students could also return at 6 p.m. to study at the school for a couple of more hours, as needed.

For many of the students, the camp was the first time they had been hiking and where they learned how to swim. “It was the first time being away from our families for that long, doing our own laundry and making our own beds,” Mr. Pérez said. “There were a lot of learning experiences that, as a student, you’re like ‘Oh, why do we have to do this?’ But as an adult, you realize how impactful they were for your growth.”

Mr. Pérez went on to Xavier High School in New York. As a sophomore, he became the receptionist at Nativity, a position the school offers to alumni so they can stay involved in the community. That is part of the graduate support program, through which the school helps students navigate high school and college applications and offers financial support.

Mr. Pérez then went to the College of the Holy Cross in Worcester, Mass. He became a big brother when a Nativity school opened in the area, and he invited his Holy Cross friends to participate.

“Our schools are successful because we’re a community. It is beyond just academic proficiency and growth.”

“It was exciting to see a new school started in Worcester and in the city that I was in, but also it is a bit daunting to kind of start the tradition of a Nativity school, primarily because there is no history there,” Mr. Pérez said, explaining that Nativity had already operated in New York for decades before he enrolled.

When he was at Nativity in New York, alumni would come back to his school, play basketball with the students and share their experiences of high school and college. But Worcester students could not count on alumni yet. It was difficult to implement a study hall, uniforms and an extended day.

“I would hear the students complain here and there,” he said. “But it was a great experience because you could see the program working. The first couple of months, the students had a hard time interacting. But they became more comfortable and confident in the system.”

The program in Worcester has continued for the last 15 years and is flourishing, Mr. Pérez said.

“It just speaks to the beauty of the model itself of the small classroom, small school,” he said. The small setting creates a community that is like a second family, he said, and the school becomes like a second home.

After his bachelor’s degree, Mr. Pérez received his master’s from Fordham University. He served as teacher, counselor and then principal of Nativity Mission School in New York, which celebrated its 50th anniversary this September. He then became the principal of St. Aloysius School in Harlem until it closed, and then served as assistant principal for academics of LaSalle Academy.

Mr. Pérez, 37, is now the executive director of the NativityMiguel Coalition, a national network of faith-based schools that follow the Nativity model for helping children prepare for rigorous high school curricula. The coalition of 49 schools brings together Nativity and San Miguel Schools, which were founded by the Christian Brothers. Episcopal schools and centers run by religious sisters are also part of the network. Jack Podsiadlo, S.J., who spent decades serving at the Nativity Mission Center in New York, was a key figure in establishing the network.

Typically, students at these schools qualify for the federal reduced lunch program. Students often come from immigrant families or from generationally impoverished communities, Mr. Pérez said, noting that 46 percent of students are Latino and 40 percent are black. His parents, Gildardo and Carmen, immigrated to New York from Mexico in the 1970s.

“I was fortunate to have parents who regarded education as a top priority,” said Mr. Pérez, the second of three children in his family. “And you probably would hear this a lot in many of our Nativity schools.”

In addition to academics, Mr. Pérez said the schools develop students’ character. “It is a time where they develop and get a sense of who they are and what they’re capable of,” he said. “And I’ll speak from experience: It was a time for me to, like, really be myself. I never felt as if I had to conform to a certain way. Yes, I had to conform to the uniform and to, you know, the going down the stairs quietly or sitting in rows. But, you know, the teachers and the faculty and someone like Father Jack [Podsiadlo] were never asking us to be something we were not.”

That, according to Mr. Pérez, helps explain why the model is successful. “Our schools are successful because we’re a community. It is beyond just academic proficiency and growth,” he said, noting that Father Podsiadlo spoke Spanish and Masses at his school were bilingual.

“The small size allows for much more interpersonal relationships with families, and you’re with them for sometimes four years, maybe even five,” Mr. Pérez said. “What we do highlights, celebrates and uplifts the communities in which we find ourselves serving. It is much more about who you are as an individual and who your family is and what they want.”