Bishop McElroy: EWTN must decide if it wants to be ‘with Peter and under Peter’ 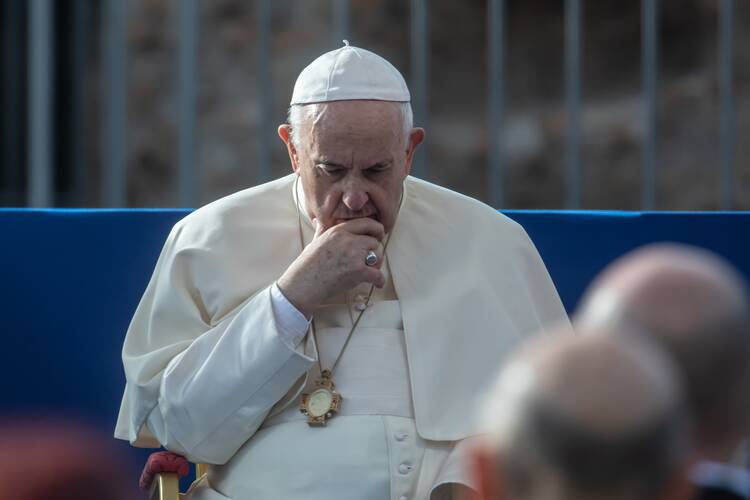 Pope Francis attends a Christian prayer service in front of the Colosseum in Rome Oct. 7, 2021. The prayer service was part of an event to plea and pray for peace. (CNS photo/Stefano Dal Pozzolo, pool)

Read Part I here. This interview has been edited for clarity and length.

Gerard O’Connell: Are the U.S. bishops of one mind on the immigration question?

Bishop Robert McElroy: Yes. I would say that what the bishops are saying is that we as a nation have to reclaim our heritage as a haven for immigrants and refugees on a large scale and that we need to move methodically to do that, organizationally and with resources, with the church also involved.

We are a nation of immigrants, we have to have a significant number of people from other countries that is not simply based on their resources, skills, talents but that allows people of different classes, different social backgrounds, different nationalities to come into our country and to become citizens of our society. And the same thing with the refugees. We have to move back toward [previous] numbers of immigrants and refugees that we take in, and we haven’t been doing [so] in the last years.

I think the bishops would say we need to restore a far more robust set of immigrant and refugee programs in the coming years.

I think the bishops would say we need to restore a far more robust set of immigrant and refugee programs in the coming years. It’s just how do you deal with it when it becomes overwhelming, as is happening in Italy and other European countries. How do you keep a sense of balance on that? Simultaneously, we must initiate a genuine effort to systematically collaborate with the countries of Central America to reduce the devastating forces in those nations that generate emigration out of a fear of violence, economic devastation and environmental devastation.

The United States has withdrawn from Afghanistan. What do you say about this?

I wrote an article for America 10 years ago about “war without end.” At that time there was a historian, David Kennedy, who said America has now reached the capacity to wage wars of this type because our casualties are relatively low because of the type of warfare we wage, and our resources are large, so we can sustain them. So we can have wars that go on for 10 years.

There should be no illusion that ending a war establishes peace; many times it doesn’t. But continuing a war for this long absolutely does not bring peace.

I think it was very important to bring this war to an end, because it no longer had a goal that was realistic for anyone, that promised anything other than continuous warfare. That doesn’t mean it establishes peace. There should be no illusion that ending a war establishes peace; many times it doesn’t. But continuing a war for this long absolutely does not bring peace.

We’re moving toward the U.N. conference on climate change, called COP26, in Glasgow from Oct. 31 to Nov. 12. In California, you’ve had fires; elsewhere in the United States there have been hurricanes, floods and so on. All of this highlights the urgent need to address climate change. Do you think the Catholic Church in the United States is adequately involved in this question?

I think we have to have a massive new initiative within the church in the United States on the question of climate change. This means engaging the church at the national level but also at the local levels, too. These national disasters—the fires, the hurricanes, the floods, the earthquakes, the changes in the amplitude and frequency of these events—are signs to us of the reckoning that is coming, and I think the church needs to be on the cutting edge of these questions. And we’re not there. In the United States, we’re not there in terms of effectively witnessing to it as a central element of the Gospel at this moment in terms of public policy.

I believe that abortion, climate change and racism constitute the three greatest claims on the consciences of Catholics at this moment.

The continuing failure of the church in the United States to devote concentrated attention to climate change is a tragic reflection of the power of our national culture of climate denial to mute the mandate of the Gospel to care for our common home with a sense of urgency and depth.

I believe that abortion, climate change and racism constitute the three greatest claims on the consciences of Catholics at this moment. Climate change because it involves the future of humanity itself; abortion because of the massive number of human lives involved; and racism because it is the unending wound in American culture and history that continually tears us asunder.

I think synodality is a moment and a movement of profound opportunity, which invites us at all levels to understand that when we undertake action together, when we set goals, when we discern where God is calling us, we need to do so in a way which honors the participation of everybody.

I remember the Gallup Organization did a survey, maybe 20 years ago, which asked the question, why do people come to church? The criterion that made a difference regarding why they keep coming was if they feel they would be missed if they don’t. In other words, the people around them in the pews would miss them. What that boils down to is people feel they count in the life of the church. To me synodality is trying to accomplish an ecclesial life where people feel they count at all levels in the life of the church.

Twice this year—on the trip to Iraq and again in his conversation with Jesuits in Bratislava—Pope Francis expressed his concern over the attacks that are being made against him by EWTN. I know that senior Vatican officials are also greatly concerned about this. I find it difficult to understand why the U.S. bishops do not defend him against such attacks. What do you have to say on this?

In recent years, major figures and programs within EWTN have reflected with ever greater prominence a systematic oppositional tone to many of the major priorities of this pontificate, often accompanied with caricature and scorn. The continual attention to the worldview of Archbishop [Carlos Maria] Viganò, the despicable treatment of the Amazon Synod, the not so subtle efforts to paint Pope Francis as theologically deficient and doctrinally suspect, when amplified by the largest religious media empire in the world, have become a source of disunity and distortion within the life of the church which can no longer be ignored.

[Bishop McElroy: When bishops increase barriers to Communion, we are not being the pastors Pope Francis called us to be.]