Which Bible translation should Catholics use? It’s not the one you think. 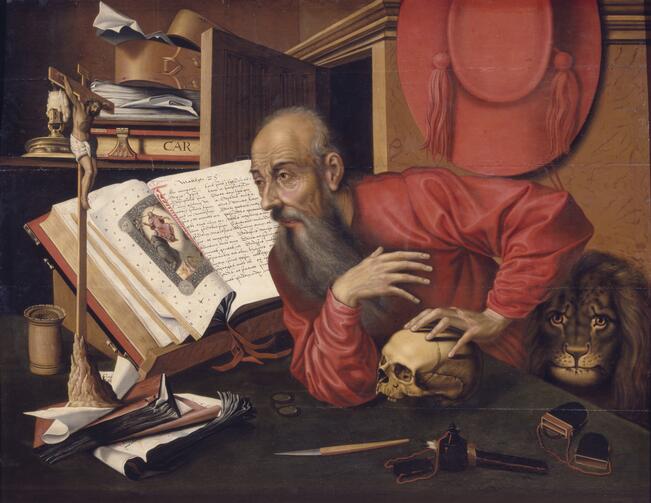 St. Jerome, whose feast day is Sept. 30, is a giant in the intellectual history of the church. He is best known for translating the Bible from its original Hebrew and Greek into Latin, and his translation, called the Vulgate, remained the most commonly used version of scripture for over 1,100 years.

Today, though, the Vulgate is no longer in common use; in the English-speaking world, dozens of translations have vied for readers in its stead.

English-speaking Catholics in the 21st century have an embarrassment of riches from which to choose. There are mainstream translations like the New King James Version, the New International Version and the Good News Bible.

There are also more specialized versions: Last year, Bishop Robert Barron’s ministry published its Word on Fire edition of the New Testament, replete with full-color images, historical explanations and reflections. Other Bibles are designed with specific—sometimes very specific—interests in mind, like The Holy Bible: Stock Car Racingedition, which intersperses Scripture with unrelated pictures of race cars.

Amid such a multitude of choices, what is the best Bible translation for Catholics?

The importance of translation

For many Catholics, finding the right Bible translation can seem a tricky topic to broach. To read Scripture more faithfully, as the Second Vatican Council exhorted the faithful to do, requires an easily readable translation, but also one that accurately translates the original biblical languages. Additionally, Catholic Bibles contain seven books from the Old Testament that are not found in either Protestant Bibles or in the Jewish Scriptures.

Getting Catholics to read the Bible also sometimes remains a challenge. Even though the Second Vatican Council documents vigorously encouraged Catholics to read Scripture regularly, they “did not really turn to the Bible in a way that would have enriched them,” said Richard J. Clifford, S.J., professor emeritus of Old Testament at Boston College’s School of Theology and Ministry.

Catholics are generally more lax than other Christians about reading Scripture on a regular basis. If Catholics hope to change this, they shouldn’t let the pressure of choosing the right version of the Good Book prevent them from opening one at all. “The best Bible is the one you open and read,” said Mary Elizabeth Sperry, who serves as associate director for permissions and New American Bible utilizations at the United States Conference of Catholic Bishops. “It doesn’t matter how good a translation is. If it sits on your shelf closed, it’s not a helpful Bible.”

Catholics shouldn’t let the pressure of choosing the right version of the Good Book prevent them from opening one at all.

Michael Simone, S.J., who until recently served as professor of sacred Scripture at the School of Theology and Ministry, concurred. “If I’m just looking to hear the voice of Jesus today, I think any Bible translation works,” he said. He noted that for the most part, today’s Bible translations reliably transmit the actual Greek and Hebrew texts, and the odds are slim that someone will be led into extreme doctrinal error by reading a non-Catholic Bible.

That said, it can be helpful for Catholics to seek out Bibles that offer the same translation they’re likely to hear at Mass, because the repetition can help to reinforce passages of Scripture in their memory. “We want the Bible to become part of their thinking, their heart,” Ms. Sperry said.

To this end, the translation team of the New American Bible—which works under the auspices of the U.S.C.C.B.—hopes to significantly bridge the gap between hearing Scripture in the liturgy and reading it, studying it and praying with it in one’s personal life. The team is currently working on updating its translation of the New Testament and, pending Vatican approval, the U.S. bishops will introduce the updates into the lectionary, so that Catholics will be able to hear the translation used in Mass readings in addition to accessing it in an updated version of the New American Bible (often called the NABRE, pronounced like neighbor).

No matter the translation, the end goal for Catholics looking to explore Scripture should be to grow closer to Christ, the incarnate Word of God.

Outside of the context of Mass, where homilies and parish bulletins are available to clarify tough passages from the Sunday readings, the Bible can be daunting to approach. Because the books of Scripture were written in historical and cultural contexts extremely different from the modern world, commentaries and cross-references are invaluable for readers in order to clear up potential confusion. In fact, the church thinks that this is so important that it requires Catholic Bibles to include these resources in order to receive ecclesiastical approval.

Readers should keep in mind, however, that as useful as annotations might be for understanding the meaning of a passage, they do have the potential to distract readers from pursuing a spiritual reading of Scripture. Editions of the Bible that are heavy on commentaries result in a reader wondering about the literal meaning on the page rather than a passage’s meaning within the context of the reader’s life, Father Clifford said.

As all three scholars mentioned, no one Bible is better in all ways than every other.

Still, the general consensus is that the NABRE is one of the most solid choices for Catholics. It is produced under the auspices of the U.S.C.C.B., which has approved the text, notes and cross-references. While the translation tends to be somewhat literal, Father Clifford said that this is not a major impediment to its readability.

Another good translation is the New Revised Standard Version. This version was spearheaded mainly by Protestant biblical scholars, with a handful of Jewish and Catholic translators also joining in the effort. There is little that is controversial in the translation; in fact, the Canadian Conference of Catholic Bishops employs it for liturgical readings. And for those who are looking for a translation that is more inclusive, Father Clifford says that the N.R.S.V. uses largely gender-neutral language. Unlike the NABRE, the base translation is sparing in its commentary and cross-references, but there are scholarly editions of the N.R.S.V. which offer an abundance of notes, such as the New Oxford Annotated Bible.

Another option for accessing Scripture is the New Jewish Publication Society’s translation of the Hebrew Scriptures. Given that it is a work of Jewish scholarship, this edition does not include the New Testament or the books of the Apocrypha. Even so, Father Clifford says that he employs this translation in classes he teaches, in addition to Christian Bibles. The N.J.P.S. includes commentaries at the bottom of each page that cite leading Jewish intellectuals from across the centuries, like Ibn Ezra and Rashi. This translation provides a fresh perspective on otherwise familiar texts, allowing Catholics to read them in much the same way Jews during the life of Jesus would have done.

No matter the translation, though, Ms. Sperry says that the end goal for Catholics looking to explore Scripture should be to grow closer to Christ, the incarnate Word of God. As the Catechism of the Catholic Church articulates it, “The Christian faith is not a ‘religion of the book.’ Christianity is the religion of the ‘Word’ of God, a word which is ‘not a written and mute word, but the Word which is incarnate and living’” (No. 108).

Correction, Oct. 1, 2021: This article previously stated that the Vatican, approved the text, notes and cross-references for the NABRE. The U.S.C.C.B. approved these, per Canon Law.