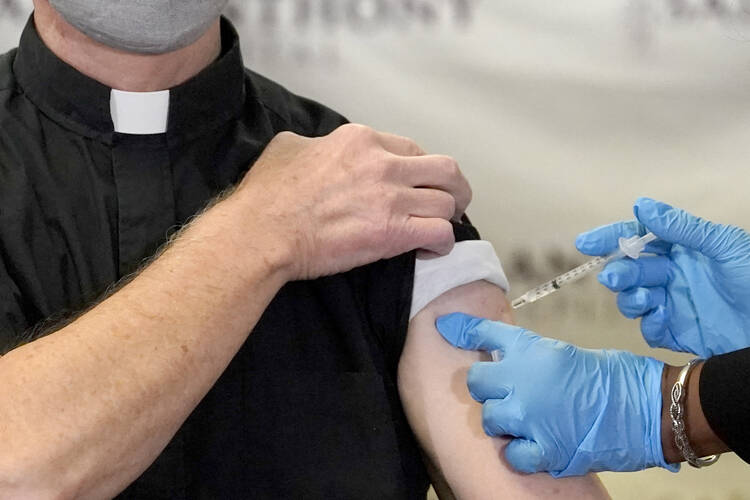 In this Wednesday, Dec. 23, 2020 file photo, a Catholic pastor receives the first of the two Pfizer-BioNTech COVID-19 vaccinations at a hospital in Chicago. (AP Photo/Charles Rex Arbogast)

A Reflection for the Twenty-second Sunday in Ordinary Times

One day, walking home from university along Eighth Avenue in Midtown Manhattan, I heard a woman screaming in terror. She was across the street but running toward me, being pursued by a man.

Wouldn’t life be easier if it came with time to think? I reasoned that I could not let the woman be attacked by the man without doing something. So often in life we recognize good reasons not to act—I think this person is panhandling—but in that moment I could only think of the deep regret I would later feel if I did nothing. My conscience would torment me.

There was something in his hand, but it did not look like a weapon. If I could get between him and her that would give her time to flee. Being a priest was not going to help. Following the custom of the university, designed to make lay and clerical faculty equal, I was in a sport jacket and tie. And given how dapper I used to dress as a professor, this would be akin to having Ralph Lauren get in your way.

So often in life we recognize good reasons not to act—I think this person is panhandling—but in that moment I could only think of the deep regret I would later feel if I did nothing.

I ran across the avenue, yelling “Hey, hey, hey.” To my surprise, he stopped where he was. She did, too, now from behind me. He screamed at her; she screamed back. I said something quite lame—“This is not the way”—but I soon realized that they were both mentally unstable. After they had settled a bit, I left them to argue.

All Christians recognize what we call “sins of omission.” “Be doers of the law and not hearers only, deluding yourselves” (Jas 1:22). We can “miss the mark” not only in what we do but in what we fail to do. There are times when our own humanity, to say nothing of our duty to God, impels us to act. Indeed, given the Gospel witness of Jesus, sins of omission probably outpace those of commission.

Like most laws, those of the Israelite covenant existed to curtail evil. Given that we were created to live in the freedom that is God, laws exist as necessary concessions to our fall from grace. Once moral evil entered our world, we were forced to sacrifice some freedoms by way of self-preservation.

Jesus never repudiates the laws of his people, but he does refuse to shelter behind them.

Jesus never repudiates the laws of his people, but he does refuse to shelter behind them. He never says: “I have done what the law requires. Leave me in safety and peace.” Christ cannot do this because he has come to assail the power of evil. He is the strong one of God, the promised Messiah, the one who bears righteousness in his hands.

The law curtails evil; Christ assaults it. Of course, the great paradox of history is that Jesus assails evil by allowing himself to become its victim. Surrender reveals his strength. Laws make the world safe for love, but the Lord’s love leaps over the law, insisting that we will surely die if we stay where we are, if we do not have the courage to follow him.

How can so many American Christians not worry that they are committing one of our century’s greatest sins of omission? The relevant facts can only be denied through a blindness that is itself sinful. For most people, the Covid-19 vaccines pose no greater threat to health than other medical prescriptions or procedures, yet they clearly save lives. Pope Francis has said that getting vaccinated is an “act of love,” not for ourselves but for the vulnerable. One needs a compelling reason not to care for others by this means of prevention.

Will history decide that the pro-life movement in America suffered its greatest setback when Catholics, who always spoke of protecting those most innocent and vulnerable, suddenly fell silent when it came to saving the lives of the poor, people of color, the aged, and those who cannot be vaccinated? All of these are disproportionately dying because of our failure to vaccinate as an act of charity.

This people honors me with their lips,
but their hearts are far from me;
in vain do they worship me,
teaching as doctrines human precepts (Mk 6:7).

Some Catholic bishops have disseminated letters that distort our Catholic faith, promoting abstract liberty over lifesaving charity. Yes, civil liberties are a value, and that is why we have laws to protect them. Yet the pressing moral issue is that we are obligated to protect human life. How can Christians, any people of good will, put their focus on protecting liberty rather than life?

How can Christians, any people of good will, put their focus on protecting liberty rather than life?

The Catechism of the Catholic Church begins its discussion of conscience by quoting “Gaudium et Spes,” the Second Vatican Council’s “Pastoral Constitution on the Church in the Modern World”:

Deep within his conscience man discovers a law which he has not laid upon himself but which he must obey. Its voice, ever calling him to love and to do what is good and to avoid evil, sounds in his heart at the right moment.... For man has in his heart a law inscribed by God.... His conscience is man’s most secret core and his sanctuary. There he is alone with God whose voice echoes in his depths (No. 1776).

However one assesses vaccination and civil liberties, even granting that governments, businesses and civic institutions should rightly be reluctant to coerce compliance, how does Christian conscience not compel us toward charity?