Blessed Rosario Livatino: the judge killed by mobsters who is on his way to sainthood 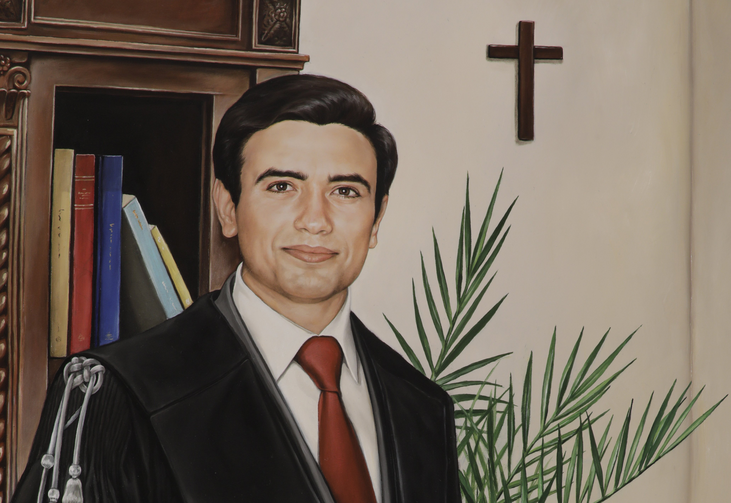 Moments before his death after being shot by Sicilian mobsters, Judge Rosario Livatino said: “But what have I done to you?”

His final words echoing Jesus Christ on the cross: “O my people, what have I done to you?” as celebrated in some Good Friday liturgies. The same words appear in the Old Testament, pronounced by God in Micah 6:3.

“Like Jesus, Judge Livatino died forgiving his murderers,” said Cardinal Marcelo Semeraro during the beatification ceremony of May 9, 2021, at the Cathedral of Agrigento in Sicily. Cardinal Semeraro is the prefect of the Congregation for the Causes of Saints.

A deeply, if quietly devout Catholic layman, Livatino was only 37 years old when he was killed by the “Stidda” mafia the morning of Sept. 21, 1990. St. John Paul II once defined him as “a martyr to justice and, indirectly, to faith.” Now his martyrdom is officially recognized by the church through Pope Francis’s decree.

A deeply, if quietly devout Catholic layman, Livatino was only 37 years old when he was killed by the “Stidda” mafia the morning of Sept. 21, 1990.

Livatino had come to be called “giudice ragazzino” (“baby judge”) by those who downplayed his authority. The expression was first used by former Italian President Francesco Cossiga, who governed between 1985 and 1992. He argued that young justices were not capable of fighting organized crime.

Blessed Livatino has proven him wrong.

He not only became internationally known for being a fair judge but for having acted consistently against Sicilian criminal gangs which had operated with near-complete impunity for decades. “When we die, no one will ask us how believing we were, but how believable we were,” he used to say.

Those who knew Livatino described him as an untouchable character. A high school friend, Giuseppe Palilla, told America that Blessed Livatino was “extraordinary in the ordinary.”

“Rosario was convinced that he did nothing special, but the extraordinary was in everything he achieved,” said Mr. Palilla, now president of the association “Friends of Judge Rosario Livatino,” which promotes his devotion in support of his canonization.

He not only became internationally known for being a fair judge but for having acted consistently against Sicilian criminal gangs which had operated with near-complete impunity for decades.

“Once I met him in a public office and said, ‘Good morning, Mr. Judge.’ He made a ‘Stop’ sign with his hand and replied: ‘Go back and remember I am always Rosario.’ This was Rosario, the man and friend that I had,” he said.

As a teenager in his hometown Canicattì, Livatino was an excellent student who helped struggling classmates with philosophy, Greek, Italian language and physics assignments. “Once a colleague copied his homework and he preferred to turn in his own paper blank,” Mr. Palilla remembered.

The simplicity of Livatino’s character, in spite of the heavy burden he carried in adult life, came from his small middle-class family. Born in 1952, he was the only son of Vincenzo and Rosalia Livatino, a lawyer and a housewife. His humble, discreet faith and character derive from his parents, who were known locally for being unusually kind to others.

The writer and biographer Maria Amata Di Lorenzo knew Livatino’s parents. They were “the tree and his son, now Blessed, was the fruit,” she said. Both parents are now deceased.

“When he was still a child, if he saw his mother troubled and tired because of daily life problems, he would approach her affectionately, saying: ‘Mom, why don’t you read a page of the Gospel?” said Ms. Di Lorenzo, who heard this story from Livatino’s mother.

“We didn’t talk much about religion, but once the religion teacher asked what the Bible meant to us. Rosario wrote: ‘The Bible is the chest in which is enclosed the most precious jewel that exists: the Word of God.’”

At school, Mr. Palilla recalled, Livatino showed an appreciation for the “affairs of God” that was uncommon for a young man his age. “We didn’t talk much about religion among the boys, but once the religion teacher asked what the Bible meant to us. Rosario wrote that ‘the Bible is the chest in which is enclosed the most precious jewel that exists: the Word of God.’”

That essay was discovered during the beatification process, and it continues: “[The Bible] is a jewel that never wears out and it is not a futile ornament, but a wonderful and wise master to spiritual and material life.” By reading and understanding the Bible, young Livatino writes, each person shall “live in courage and selflessness.”

Throughout his life, Livatino took part in the “Azione Cattolica” movement. He studied law at the Faculty of Jurisprudence of Palermo, graduating in 1975. He worked in different offices until being approved for the judiciary in 1978. In the early 1980s, he dedicated himself especially to cases involving organized crime, corruption and money laundering in the neighboring town of Caltanissetta.

After taking office as judge, Livatino developed the habit of stopping at church every morning to pray. He would also buy the newspaper from the local newsstand. Neither the parish priest nor the newspaperman knew who he actually was; he would never introduce himself as a judge to avoid privileged treatment. He would rather go unnoticed.

Livatino lived with his parents in Canicattì and commuted every day about 17 miles from home to the courthouse. It was on the road he took each day that he was gunned down. His murder, planned and executed by four criminals, was meant to demonstrate their power to a rival gang, the “Cosa Nostra.” (Though it is the name for a specific gang in Sicily, “La Cosa Nostra,” eventually came to be used generically in the United States to refer to organized crime.)

Livatino saw it coming. As tensions and threats against judges opposing the mob increased, he was offered an escort by the government, which he refused. “He was a single man and didn’t want his security guards to leave orphaned children and widowed wives,” said Mr. Palilla. Blessed Livatino never carried a gun.

“Blessed Livatino lived his duty as a judge like a consecration. His commitment to justice stemmed from his faith.”

According to Rev. Rocco D’Ambrosio, professor of Political Philosophy at the Pontifical Gregorian University, mafia groups appeared in Italy at the end of the 19th century, after the unification of the country. The position of the church toward this complex phenomenon has evolved since then—in 2014, Pope Francis stated that all mafiosi are excommunicated.

The definition of “structures of sin” established by the encyclical “Sollicitudo Rei Socialis,” written by St. John Paul II in 1987, created teaching that sin did not have to be limited to individual acts but could be an expression of structural inequity, Father D’Ambrosio explained. In 1993, John Paul II demanded mobsters to convert.

Other Italian judges were killed by mafia groups over the decades. Emblematic cases include those of Giovanni Falcone and Paolo Borsellino, both barbarically murdered in 1992 by “Cosa Nostra.”

The recognition of Livatino as a martyr is a significant step for the church, said Father D’Ambrosio. “Blessed Livatino lived his duty as a judge like a consecration. His commitment to justice stemmed from his faith,” he said. “He never got married, not because he never loved, but because he saw the duty to promote justice as a personal call.”

Another visible sign of this call was the acronym used by Livatino in many of his texts: S.T.D, standing for “Sub tutela Dei” (“Under the oversight of God”).

His most famous writing, an article entitled “The role of the judge in the changing society,” is considered his intellectual testament. Livatino advocates the absolute independence of the judge from any external influence, as well as coherence in personal and professional life. This transparency and credibility, he wrote, should be visible “outside the walls of his office, in the ordinariness of his relationships.”

The independence preached and lived by Judge Rosario Livatino clearly stemmed from his Christian identity, said Ms. Di Lorenzo. “The heads of the ‘Stidda’ decided to eliminate him for this very reason because he was an unapproachable judge [to the mobs],” she said.

“He had a very high idea of justice, as an emanation of God’s law, and for this reason he could not be ‘domesticated’ by the mafia. At one point they planned to kill him in front of the church he went to every day to deliver a message,” the biographer said.

The Vatican has not yet recognized a miracle through Livatino’s intercession that would secure his canonization. (As a recognized martyr for the faith, his cause requires only one confirmed intercession.) One report of a woman healed of lymphoma is, until now, the best-known intercession, but more and more faithful attribute miraculous events to his works.

According to Ms. Di Lorenzo, the witness of Blessed Rosario Livatino has been powerful among young people. “I remember what a law student and aspiring judge wrote one day to Rosario’s parents: ‘They have cut a flower, but they will not be able to prevent spring from coming.’”

“Rosario Livatino is a man of our time,” she said. “We have a lot to learn from him: dedication to work and work done well, with honesty and respect for others; the defense of the weakest; love for justice… living the words of the Gospel every day with great simplicity and joy.”

“He had a faith that was always humble and grateful,” she said.

Correction: Blessed Livatino was described in the original story and headline as the first judge in church history to be beatified. That is not correct. America regrets the error.