Eucharistic adoration is making a comeback among young Catholics 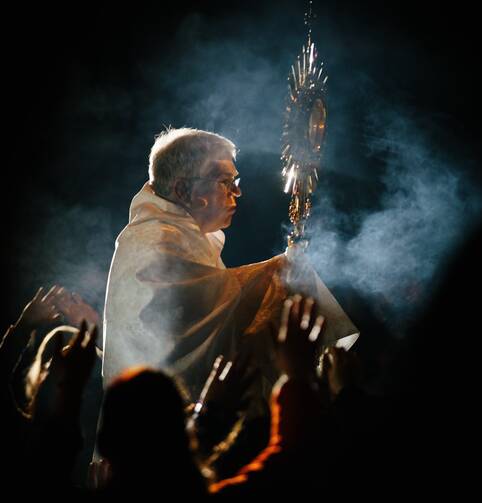 Photo by Grant Whitty on Unsplash

Eucharistic adoration—a practice with roots in the medieval church—is now an integral part of ministry to young Catholics.

It has become a staple of youth retreats and campus ministry activities, pulling young Catholics away from wired-in connections to quiet reflection in front of the exposed Eucharist.

Kimberly Belcher, a professor of theology at the University of Notre Dame, studied students at three Midwestern Catholic campuses who regularly engaged in eucharistic adoration. She found that much of its appeal on campus is due to the particular stresses placed on college students.

In a generation tuned in to social media, the absence of connection to the world is at the heart of the appeal of eucharistic adoration.

College students pursuing a prayer life, she said, often find it difficult to focus amid the racket of dorm life. Eucharistic adoration, she said, “sets aside the time and space when they will not be interrupted.”

In a generation tuned in to social media, the absence of connection to the world is, conversely, at the heart of the appeal of eucharistic adoration, according to Michael St. Pierre, executive director of the Catholic Campus Ministry Association.

“There is a lot of silence and a total absence of technology,” he said.

A lot has been written about the “nones”—those Catholics among the 40 percent of American millennials who, according to the Pew Research Center, no longer identify with a particular faith community. By contrast, the practice of eucharistic adoration is increasingly popular among those young Catholics who publicly embrace their faith. According to Pew, about a third of American millennials are regular churchgoers.

Eucharistic devotions staged a comeback after they were promoted vigorously in the 1990s by St. John Paul II.

Dr. Belcher noted that eucharistic devotions were expected to fade away after the liturgical reforms of the Second Vatican Council put a focus on participation in the Mass. But then they staged a comeback, promoted vigorously in the 1990s by St. John Paul II, and have remained a fixture of youth and young adult ministry.

The devotion has its roots, according to Anthony Ruff, O.S.B., professor of theology at St. John’s University and School of Theology and Seminary in Collegeville, Minn., in the late Middle Ages. It grew as the Protestant Reformation questioned the Catholic belief in Christ’s real presence in the Eucharist.

‘A chance to stop and reset’

Two campuses where eucharistic adoration has proven to be particularly popular are The Catholic University of America in Washington, D.C., and Franciscan University of Steubenville in Ohio.

At Catholic University there is a public praise on Wednesday nights and private devotions on Thursdays.

“It’s always a chance to stop and reset and spend time with the Lord in a tangible way,” said Brian Rhude, 24, a recent graduate of Catholic University. The praise events regularly attract hundreds of students.

“It is something they grew up with,” he said about the students. “For a lot of them, for those who have a deep spiritual life themselves, it is an opportunity to spend time with the Lord.”

For Lauren Garger of Franciscan University of Steubenville, eucharistic adoration provides “an immediate sense of peace.”

For Lauren Garger, a graduating senior at Franciscan University of Steubenville, eucharistic adoration provides “an immediate sense of peace. You realize it is more than a piece of bread. It is Jesus.”

The experience, she said, offers “more intimacy, a heart-to-heart relationship with Jesus.” On the Steubenville campus, eucharistic adoration is available 24/7 during the academic year. It also has a social justice dimension: a eucharistic procession to the town of Steubenville last year included a plea for unity in the church and nation and an end to racism.

Christian Arellano, a senior at Franciscan University, makes eucharistic adoration a part of his daily routine. He is in a university chapel most days for an hour each morning. He is part of a discernment group for the Franciscans, contemplating a possible priestly vocation. He is not alone. He said there are times at Steubenville where the chapel is filled with hundreds of silent prayers.

Mr. Arellano said he is part of a long Catholic tradition.

“You can’t become a saint without having a eucharistic prayer life.”

“You can’t become a saint without having a eucharistic prayer life,” he said.

Dr. Belcher looked at students who attended adoration once a week. She found that the practice attracted a variety of students, including young Catholic social activists immersed in issues of the environment and social justice.

In follow-up discussions with young people over a decade, Dr. Belcher has found that many have kept their progressive political views, while their participation in eucharistic adoration remains a marker of Catholic commitment.

‘A sense of belonging’

Bishops are uniformly supportive of the practice. Cardinal Timothy Dolan of New York has participated in Catholic Underground services, in which every month thousands of worshippers, mostly young people, flock to Our Lady of Good Counsel Church on Manhattan’s Upper East Side. (The program has been on pause for much of the pandemic.) There, in front of the exposed Eucharist, there is a steady rhythm of guitar music mixed with sometimes impassioned readings and preaching from members of the Franciscan Friars of the Renewal, which organizes the gathering.

Young people who participate in eucharistic adoration are part of “a new minority who gives their bishop so much hope,” said Cardinal Dolan in a passage quoted on the Catholic Underground website.

Bishop Michael James Sis of the Diocese of San Angelo, Tex., served in campus ministry at Texas A&M University in the 1990s and the early years of this century. He said he instituted eucharistic adoration at the request of students, who were used to the practice from youth retreat programs and through the encouragement of St. John Paul II. Enthusiasm was so high that he made a point of cutting off the devotion during overnight hours so that students could get needed sleep.

Young people who participate in eucharistic adoration are part of “a new minority who gives their bishop so much hope,” said Cardinal Timothy Dolan.

The practice also nurtured community among Catholic students. “By doing something that other young Catholics were doing, they felt a sense of belonging,” he said.

Paul Jarzembowski, assistant director of youth and young adult ministries for the U.S. Conference of Catholic Bishops, has been involved in youth ministry work for more than two decades. He sees eucharistic adoration as an antidote to much of what ails modern young adults.

“A lot that has to do with the world of young adults is very noisy, competitive and stressful,” he said.

Eucharistic adoration can serve as a badge of Catholic identity, particularly for a generation in which so many young adults have abandoned faith practices.

“Identity is part of the journey of young adulthood, to find out who one is and who one belongs to,” said Mr. Jarzembowski. Eucharistic adoration, a particularly Catholic practice, can serve as a cultural marker, a way of communicating, “I belong to the tribe, I belong to this community.”

Theresa O’Keefe, professor at Boston College School of Theology and Ministry, said she has seen the practice of eucharistic adoration increasing in her 15 years at the school. When she first arrived, few students had the experience, but now most of the Catholic students come with the experience through youth retreats in their home dioceses.

She said her older colleagues in the theology department, who came of age as eucharistic adoration faded in the immediate aftermath of Vatican II, were wary at first, concerned that student interest was a sign of retrograde Catholicism.

But Dr. O’Keefe said today’s students come to the practice with an entirely different attitude. They have been reared in a culture where Catholicism is not a part of the mainstream culture. Eucharistic adoration is now frequently seen as a Catholic marker.

It is not, she said, an indicator of conservative politics, at least on college campuses.

There are some concerns: “They tend to put God into too small of a space, and that is the tabernacle.”

“They tend to have a wider interpretation of what’s pro-life,” she said, noting that the students she knows are concerned about issues such as racial justice and the environment.

“It’s not a bad thing,” she said about the devotion, but she does have some concerns, including that it can promote a limited view of God.

“They tend to put God into too small of a space, and that is the tabernacle,” she said, noting that healthy Catholic sacramental life sees God’s presence not only in the formal signs of the church but also in the world at large.

How to renovate a church — without starting a liturgical design war
Nicholas D. Sawicki

Barbara McCrabb, assistant director for higher education for the U.S. Conference of Catholic Bishops, noted that eucharistic adoration is making an impact on large, secular campuses, including the University of Maryland, University of Southern California, University of Missouri and Johns Hopkins. It also provides a cultural unifier among minority ethnic Catholic groups, including Filipinos, Vietnamese and Koreans, as well as those from Africa.

For Catholic ministers, it is hard to argue against the intense experience of prayer nurtured by eucharistic adoration.

“It’s a big church,” said Donald R. McCrabb, director of the U.S. Catholic Mission Association, a former campus minister, and husband to Barbara. “We have a big tent. We try to provide lots of different avenues to awaken the Divine in us.”

Correction, June 14: Brian A. Rhude’s name was initially misspelled in this story. 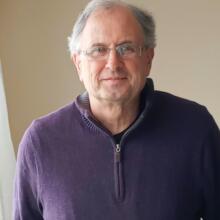