Vatican doubts new claims that St. Peter’s bones are in a forgotten tomb 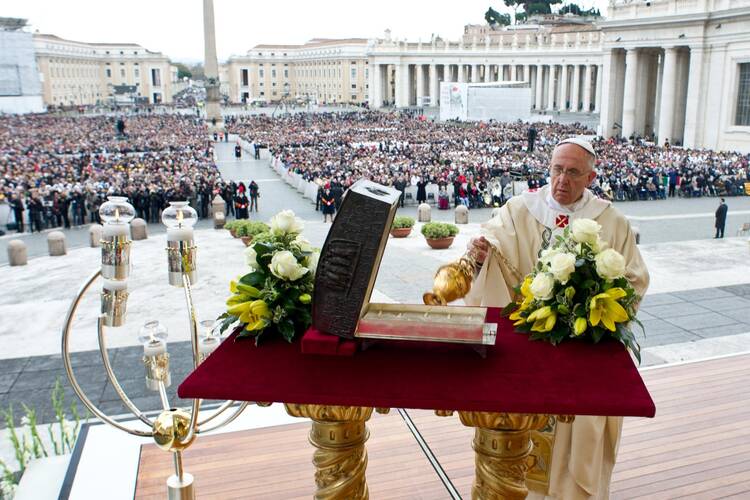 Pope Francis uses incense to bless a bronze reliquary containing bone fragments believed to belong to St. Peter the Apostle during a Mass in St. Peter's Square at the Vatican Nov. 24, 2013. A debate has ignited after three Italian researchers published a paper asserting that St. Peter’s remains may have been -- and continue to be -- buried in catacombs under the Mausoleum of St. Helena, rather than under St. Peter's Basilica. (CNS photo/L'Osservatore Romano)

VATICAN CITY (CNS) -- The remains of St. Peter may have been and possibly still could be buried in catacombs under the Mausoleum of St. Helena after being moved from the Vatican hillside during anti-Christian persecutions in the third century, according to a paper published recently by three Italian researchers.

Labeling their conclusions as "conjecture," the researchers suggested archaeologists could "validate" their findings with "excavation campaigns"; however, a leading expert in Christian archaeology and a member of the Pontifical Commission for Sacred Archaeology told Vatican News that the researchers' hypothesis was "unacceptable."

Emperor Constantine would never have gone through so much logistical trouble building St. Peter's Basilica in the early fourth century "if it had not been contingent upon the presence of the venerated remains" below, where the saint's tomb had been venerated since early Christian times, Vincenzo Fiocchi Nicolai told Vatican News May 30.

"It is clear," he said, "that Peter's remains were found in the place of the original burial site on the Vatican hill when the formidable Constantinian basilica was built, the biggest basilica ever established in the city," he said, adding that if later the remains had been moved "ad catacumbasto," then that refers to a cemetery on the Appian Way, later called, the catacombs of St. Sebastian.

A leading expert in Christian archaeology and a member of the Pontifical Commission for Sacred Archaeology told Vatican News that the researchers' hypothesis was "unacceptable."

Fiocchi Nicolai's comments were a response to a paper titled, "The Search of St. Peter's Memory ad catacumbas in the Cemeterial Area ad Duos Lauros in Rome," published in early March in Heritage, a journal of cultural and natural heritage science.

The researchers highlighted the lengthy quest by archeologists to prove where St. Peter had been buried but added that the debate was still open as to where his remains could be found.

By referring to early Christian texts, maps of the catacombs, a fourth-century marble sepulchral inscription of "Petri" and the orientation of the above ground basilica and mausoleum Constantine had built for his mother, St. Helena, the researchers claim "the last catacomb that has housed, or may still house today, St. Peter's remains ... is definitely that of the Sts. Marcellinus and Peter," located on the ancient Via Labicana. St. Marcellinus was a priest and St. Peter was an exorcist, who both died in 304 during the Diocletianic persecution.

While scholars are certain St. Peter's ancient tomb was located on the Vatican hill where he had died a martyr and where Constantine ordered a basilica be built, his remains have been a source of much controversy and mystery.

"The presence of Peter's remains in the catacombs of Sts. Marcellinus and Peter, therefore, would directly and simply explain why Constantine built the complex basilica and mausoleum in that area," the researchers wrote. They referred to a seventh-century copy of the Liber Pontificalis -- Book of the Popes -- that said that the basilica was "dedicated to St. Peter the Apostle (Beato Petro), martyred with Marcellinus."

And one burial "cubicle" below has a fresco depicting St. Peter holding a scroll, they wrote.

Fiocchi Nicolai told Vatican News that the reasoning the authors used to posit that the location was dedicated to St. Peter the Apostle was "acrobatic and, in fact, based on nothing."

The term "beatus" is a common term in the Liber Pontificalis to refer to every saint, and the burial inscription of a "Petri" whose date of death is the feast of Sts. Peter and Paul is a coincidence, he said, since the name "Petrus" is very common.

While scholars are certain St. Peter's ancient tomb was located on the Vatican hill where he had died a martyr and where Constantine ordered a basilica be built, his remains have been a source of much controversy and mystery.

St. Paul VI announced in 1968 that the "relics" of St. Peter had been "identified in a way which we can hold to be convincing," after bones were discovered following excavations of the necropolis under St. Peter's Basilica, which began in the 1940s near a monument erected in the fourth century to honor St. Peter.

The pope had cases of the relics placed beneath the basilica's main altar and in his private chapel in the Apostolic Palace. Scientists have confirmed the remains are those of a 60- to 70-year-old robust male, according to Vatican News.