UFOs are back in the news—and Catholics are ready to deal with any theological questions on alien life. 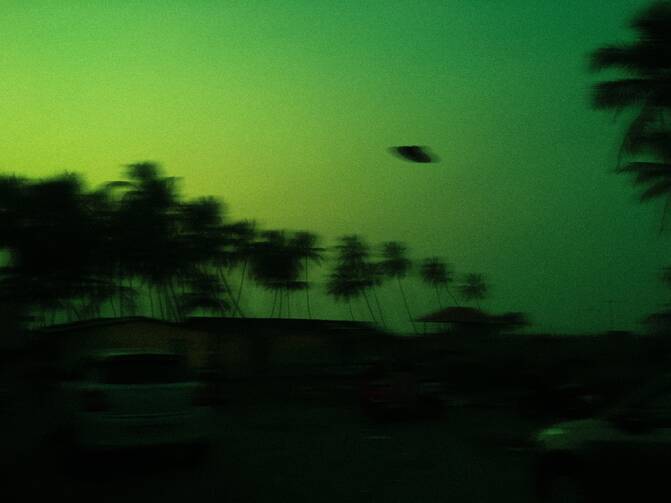 Photo by Albert Antony on Unsplash

(RNS) — I first met Jesuit Brother Guy Consolmagno, head of the Vatican Observatory and sometimes called “the pope’s astronomer,” after an event on science fiction and theology we did at the Sheen Center for Thought & Culture.

We ended up talking a lot about aliens. He agreed with me that the Catholic intellectual tradition would have absolutely zero problem with the idea of intelligent life — that is, substances of a rational nature (the classic definition of a “person” in my field) — on other planets.

But when asked in a later, more in-depth interview on these topics if he would be willing to baptize an alien, he said, “Only if she asked.”

When asked if he would be willing to baptize an alien, Jesuit Brother Guy Consolmagno said, “Only if she asked.”

At one point in our history, the discussion of nonhuman persons would have been limited to Wookies like Chewbacca in “Star Wars” or Vulcans like Spock in “Star Trek.” But with the stunning “60 Minutes” segment on UFOs this week, it is now fair to say not only that we have something close to strong evidence that we are not alone in the universe but that the idea has gone mainstream.

According to the CBS News flagship show, a report due to Congress next month from the director of national intelligence and the Pentagon is poised to offer firm video evidence of incredible encounters with UFOs — including from Navy pilots who claim to encounter them “every day.”

There is some chance that these vehicles could be supersecret spy technology from, say, China or Russia that we previously didn’t know about. But in light of documented movements that no other known aircraft can pull off — even when flying into a massive headwind and without having any kind of exhaust plume — the UFO explanation is, remarkably, more likely at this point.

Sen. Marco Rubio told “60 Minutes” that his colleagues are very interested in getting the report and that the stigma surrounding this issue is starting to fade.

It is now fair to say not only that we have something close to strong evidence that we are not alone in the universe but that the idea has gone mainstream.

I’ve heard lots of folks over the years speculate on what the reality of nonhuman persons on other plants would mean for religious belief — implying that it would be some kind of challenge or problem. But I agree with Ezra Klein, who argued in a recent New York Times column that the challenge is actually more profound for his own secular worldview, which positions humanity as a kind of cosmic accident in an empty cosmos.

On the contrary, Klein notes, religious traditions have always believed that we share both Earth and the larger universe with other intelligent beings: angels, demons, demigods, jinn and other kinds of nonhuman intelligences.

We’ve lost that mindset in the developed West as Klein’s worldview has become dominant, but in a course I teach for theology majors titled “Animals, Angels and Aliens: Beyond the Human in Christian Thought,” I try to help my students understand and appreciate a wider, more open-minded view of the universe, and how recognizing the existence of other powers and principalities might break down their largely myopic worldviews.

The Catholic intellectual tradition stands ready to help humanity interpret and process the fact that we are not alone in the universe.

One of the texts I use in the course is Thomas F. O’Meara’s wonderful book “Vast Universe,” which gives newbies a nice survey of thought about extraterrestrials and Christian revelation. From Origen in the third century to Thomas Aquinas in the 13th to the Renaissance thinkers of the 15th and 16th centuries, there is already a robust set of theological reflections on a host of questions that nonhuman persons on other planets produce.

Did Jesus die for them too? Or would they need their own Incarnation and savior? Or maybe they didn’t have a primeval original sin that disordered their nature and environment and therefore wouldn’t have the “happy fault” that produced our particular history of salvation? Are they governed by our sense of right and wrong or would it be quite different? Or would they be capable of sinning at all?

Far from being a kind of backbreaker for religious faith, our becoming aware of the existence of other rational creatures in the cosmos would likely reinvigorate theological inquiry quite dramatically, and the church’s intellectual tradition on these questions would be brought to bear in exciting and important ways.

So bring it on, director of national intelligence and Pentagon. Let’s see what you got. The Catholic intellectual tradition stands ready to help humanity interpret and process the fact that we are not alone in the universe.

Charles C. Camosy
@CCamosy
Provide feedback on this article
Join the conversation: Login or create an account
Before you can comment, you need to update your profile to include your first and last name, as required in our comments policy. Then reload this page and you'll be set up for commenting. Update your profile