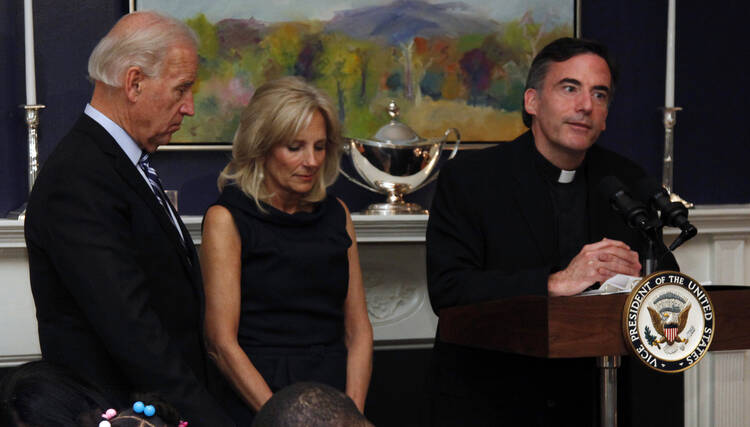 In this Nov. 22, 2010 file photo, Vice President Joe Biden, left, and his wife, Jill Biden, center, stand with heads bowed as the Rev. Kevin O'Brien says the blessing during a Thanksgiving meal for Wounded Warriors in Washington. (AP Photo/Carolyn Kaster)

The 54-year-old priest, who has been on administrative leave since March while his Jesuit province investigated reports of his alleged misconduct, said in a May 9 letter to the university community that based on the results of this review, he would begin taking part in an outpatient therapy program for alcohol use and stress management.

The school’s board members accepted his resignation the next day.

A statement to the Santa Clara community from John M. Sobrato, chairman of the school’s board of trustees, said the investigation by the Jesuits West Province found that the priest had “engaged in behaviors, consisting primarily of conversations, during a series of informal dinners with Jesuit graduate students that were inconsistent with established Jesuit protocols and boundaries.”

The statement said the review noted that “alcohol was involved and that no inappropriate behavior was found in any settings outside of these dinners.”

Sobrato said the university would immediately begin the search process for a new president and that the university’s provost, Lisa Kloppenberg, would continue to serve as acting president. He also stressed the board of trustees “takes this situation very seriously and fully supports those who came forward to provide their accounts.”

The board chairman, a graduate of Jesuit-run Santa Clara University, said the Jesuit province had directed Father O’Brien to remain on leave and take part in a four- to six-month “therapeutic outpatient program, which he has now begun, to address related personal issues, including alcohol and stress counseling.”

Father O’Brien received some national attention in January for celebrating Mass on Inauguration Day, prior to the official Jan. 20 swearing-in ceremony, at St. Matthew’s Cathedral in Washington, which was attended by now-President Joe Biden and now-Vice President Kamala Harris along with their family members and other political leaders.

Father O’Brien received some national attention in January for celebrating Mass on Inauguration Day, which was attended by now-President Joe Biden.

In his homily that day, he urged the congregation to thank God for many things but also to continue to acknowledge and “rely on God’s help, God’s encouragement.”

The priest, a former associate pastor at Holy Trinity Church in Washington, where the Bidens have attended Mass and continue to do so, has been described as a family friend of the Bidens.

In Washington, Father O’Brien was executive director of campus ministry and then vice president for mission and ministry at Georgetown University from 2008 to 2016. He then served as dean at the Jesuit School of Theology at Santa Clara University for two years before becoming the university’s president in 2019.

He was born in Montreal and moved with his family to Florida when he was a child. He was a practicing lawyer before he became a priest.

He served in a variety of ministries prior to academia: as a Jesuit Refugee Service chaplain ministering in immigration detention centers in Los Angeles and working with migrants on the Arizona-Mexico border. He also worked in Bolivia, Mexico, Guatemala, and India, where he cared for patients with Hansen’s disease, once called leprosy.

The priest, a former associate pastor at Holy Trinity Church in Washington, where the Bidens have attended Mass and continue to do so, has been described as a family friend of the Bidens.

The priest’s letter to the Santa Clara community said his “extended absence from campus during these challenging times does not serve the university well” and that after much prayer and thought and “out of deep love for Santa Clara,” he decided it would be best to step aside now.

“While my deepest desire and skill set are attuned to return to leadership, I will not know until the program’s completion how and when I can do so most effectively,” he wrote in a letter published May 12 on the website of The Mercury News daily newspaper of San Jose, California.

Father O’Brien said he knew he could not “leave the university waiting, amid all the challenges we face in a very competitive landscape and given the opportunities we need to seize as we pivot to a post-pandemic context.”

The priest said his provincial, Jesuit Father Scott Santarosa, expects he will return to active ministry, but “it will not be at Santa Clara as president—a statement which is very hard for me to write.” He added that he has loved his role at the school “primarily because of the people.”

Speaking directly to the university’s students, Father O’Brien said: “I am at heart a teacher and an educator, so I wish to close with a message for our students. It is important to have friends in your life, as I do now, who can speak honestly when they are concerned about you.”

He added, “Equally important: No matter the success or positions you achieve in life, everyone needs help at times, and it is OK to ask for help when you need it, and to allow others to care for you.”