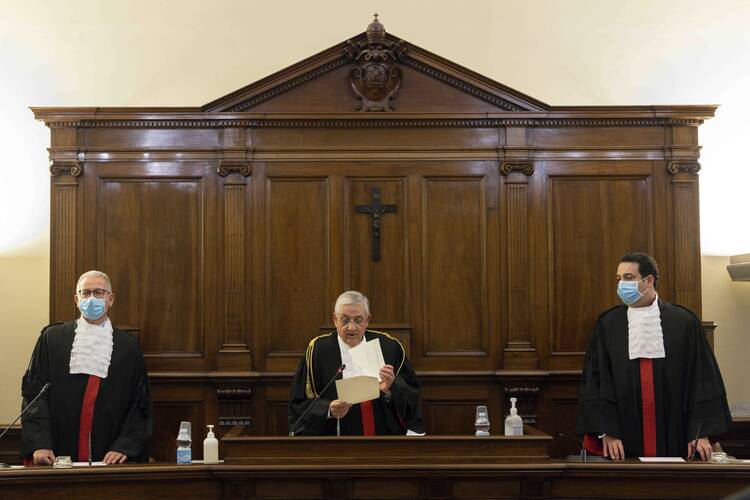 Judges are pictured in the courtroom during the trial of Angelo Caloia, former president of the Institute for Works of Religion, at the Vatican Jan. 21, 2021. Caloia, the former director of the so-called Vatican bank, and his lawyer, Gabriele Liuzzo, were found guilty of money laundering and embezzling millions of euros from the sale of Vatican properties. Both received a prison sentence of 8 years and 11 months and ordered to pay a fine of 12,500 euro ($15,200). (CNS photo/Vatican Media)

VATICAN CITY (CNS) -- A former president of the Vatican bank and his lawyer were found guilty of money laundering and embezzling millions of euros from property sales.

According to a statement released by the Vatican Jan. 21, Angelo Caloia, who served as president of the Institute for the Works of Religion from 1999 to 2009, and his lawyer, Gabriele Liuzzo, were sentenced to 8 years and 11 months for skimming profits from the sale of Vatican properties.

Giuseppe Pignatone, president of the Vatican tribunal, handed down the sentence and ordered Caloia and Liuzzo to pay a fine of 12,500 euros (US$15,200) each.

Lamberto Liuzzo, Gabriele's son, was also found guilty for his involvement and was sentenced to five years and two months in prison. He was also ordered to pay a fine of 8,000 euros (US$9,730).

All three defendants received a lifetime ban from serving in public office. However, they also have the right to appeal the sentence. None of the defendants were present for the sentencing, and the Vatican did not say when or how the men would be taken into custody.

Shortly after the hearing, the Vatican released a statement saying the judgment was the culmination of a two-year investigation "to clarify the main aspects of the case" and to allow experts to compare the amount of money received by the Vatican bank to the market value of the properties.

The Vatican had announced in late 2014 that the two men -- along with Lelio Scaletti, the former director general of the bank -- were under investigation in a case involving the sale of 29 Vatican-owned buildings in Rome and Milan between 2001 and 2008. Scaletti has since died.

The Vatican court ordered all assets seized from the defendants' accounts and awarded 23 million euros (US$27.9 million) to the IOR and to Sgir, an Italian-registered company owned by the Vatican bank.

However, the court determined that both entities may be further compensated after the overall moral, economic and reputational damage inflicted by the embezzlement is determined in a separate civil trial.

Can defendants get a fair trial at the Vatican? The Vatican decides it doesn’t want to hear Italy’s answer
Nicole Winfield - Associated Press

Before delivering the sentence, Pignatone thanked all those present at the trial "for their contribution to this process, a contribution both in the reconstruction of complicated facts and in the law in matters of considerable complexity."

At the sentencing hearing, Milano said the investigation and subsequent court proceedings were "very thorough and conducted with great care by all."

The trial, he added, was "destined to remain in history."

"This is the first application of the norms introduced in December 2018, within the broader framework of adapting Vatican legislation to international standards for combating money laundering, corruption and other serious crimes," the Vatican said.