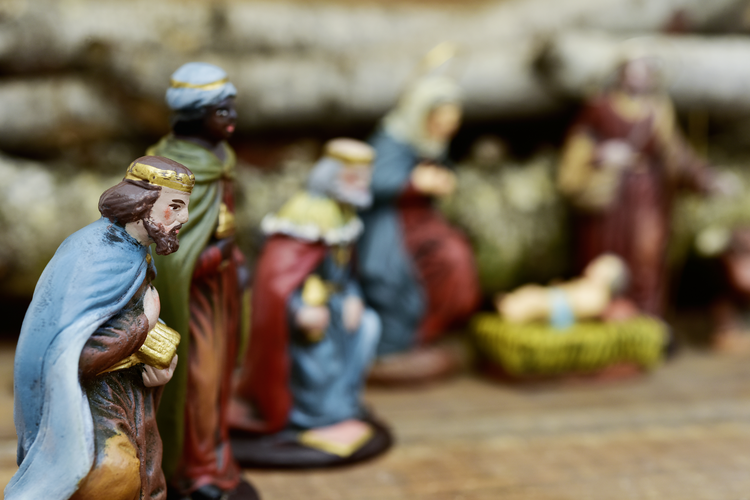 Photo by user nito100 on iStock

A Reflection for the Solemnity of the Epiphany

Christmas, as our culture celebrates it, does not rise to the revelation of the Gospel, and the dearth runs deeper than the secularization of the holy day. Even the carols we sing in church are content to concentrate upon a touching and tender birth, though something like “A child, a child, shivers in the cold” at least bespeaks the poverty and hardship of Christ’s beginning.

The great exception in this sentimental season is the fourth verse of “We Three Kings,” which typically makes its appearance on the Feast of the Epiphany.

Myrrh is mine, its bitter perfume
Breathes a life of gathering gloom
Sorrowing, sighing, bleeding, dying
Sealed in the stone-cold tomb

Matthew records three gifts presented to the child: gold bespeaks kingship; frankincense, divinity; and myrrh, humanity, associated as it was with the preparation of the dead. The three are equally telling: here is the promised Messiah; here is the very presence of God; and here is the one who has come among us to die.

In our woundedness, we killed the Son of God. His triumph over sin and death is the unmerited and unexpected gift of God to us.

The scope of Luke and Matthew is not to strum the strings of sentimentality. Both of our infancy evangelists present the birth of Christ as prefiguring his death. This child has been born among us to be rejected and to die. Matthew’s second chapter makes this so clear: the infant’s life is threatened by a tyrant. He is almost massacred. He is forced into exile. He cannot return to Judea.

The Christian proclamation, revealed in the death and resurrection of Jesus, is that God did indeed come among us, but only to be rejected by us. In our woundedness, we killed the Son of God. His triumph over sin and death is the unmerited and unexpected gift of God to us.

Matthew foreshadows this paradox. Outsiders, magi from the East, beyond the borders of Israel, accept the Christ while the leadership of his people conspire against him. Luke accomplishes much the same when Simeon blesses the child and says to his mother:

Behold, this child is destined
for the fall and rise of many in Israel,
and to be a sign that will be contradicted
(and you yourself a sword will pierce)
so that the thoughts of many hearts may be revealed) (2:34-35).

A transition of power is coming. The magi show us how to resist corrupt leadership.
Jaime L. Waters

As the Gospels repeatedly insist, this Christ divides—not only his own nation but every people. We are called to choose. We must choose.

Who can be opposed to the Christmas that our culture has created? What is there to choose? It asks nothing of us, insisting that love triumphs. So does the Gospel, but love’s victory is over sin and death, and it is twice-over purchased: by the blood of the Lamb and by our free decision of faith, reinforced in countless daily demands. Remove those two freely-given yet costly sacrifices from Christmas, and you have little but sentimentality left. Certainly, it is less than the good news the angels proclaimed.