A transition of power is coming. The magi show us how to resist corrupt leadership. 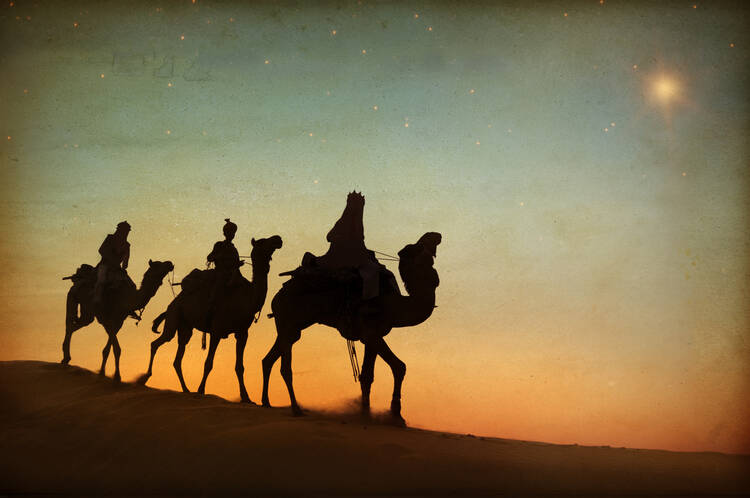 Photo by user Rawpixel on iStock.

Today is the feast of the Epiphany, the celebration of the magi following a star to find their way to the newborn Jesus. Their journey and acts of worship are examples of how we should seek and find Christ in our lives. The feast is often interpreted as an invitation and inclusion of Gentiles together with Jews in worshiping Jesus as Messiah, a point that is buttressed in the first and second readings. The narrative also provides examples of how to reckon with corrupt leaders, which are especially relevant during this time of transition of power.

Do you speak truth to power?

How can you be a light to the world?

How does your faith inform your civic engagement?

In the Gospel reading from Matthew, we hear King Herod’s concern about Jesus being king of the Jews, interpreting his birth as a potential threat to power. Herod consults the chief priests and scribes for details on what is known of the coming Messiah. The Jewish leaders counsel Herod, paraphrasing texts from Micah and 2 Samuel saying: “And you, Bethlehem, land of Judah, are by no means least among the rulers of Judah; since from you shall come a ruler who is to shepherd my people Israel.” These passages were about King David and the covenant that promised him an everlasting dynasty.

Matthew interprets these texts in the light of Jesus’ birth in Bethlehem, making connections between Jesus, David and the Hebrew Scriptures. The Jewish leaders do not cower. They do not placate or indulge Herod with only what he wants to hear. They do not deny a potential threat to Herod’s power; rather, they affirm the significance of a Messiah who would emerge as a leader from Bethlehem. While Herod’s evil intent was likely clear to them, they still opt to speak truth to power.

Clearly concerned, Herod enlists the magi as spies, sending them to uncover Jesus’ whereabouts. Matthew depicts them offering gifts that his Jewish audience would recognize as significant: gold, frankincense and myrrh, gifts connected with royalty, priesthood and anointing.

The magi are warned in a dream—a common biblical motif for divine communication—not to return to Herod, so they avoid him and shrewdly go home by another route. Presumably, he would press them on Jesus’ location and attempt to do him harm, as he does later in the narrative in the massacre of infants. Rather than endanger Jesus or themselves, the magi avoid Herod as an act of protection.

The Jewish leaders and the magi contend with a king with nefarious intentions and find meaningful ways to avoid supporting his corruption. Recent history has given us plenty of examples of people resisting and failing to resist the corrupt use of political power. As we look to the upcoming transition of power in national government, these readings remind us to be grateful for those who confront unjust leaders and to be alert to the ways God continues to call us to speak truth to power. On this Epiphany we should, like the magi, journey nearer to Christ, remain engaged in the world and avoid corruption at all costs.

This article also appeared in print, under the headline “Overcoming corruption,” in the January 2021, issue.