With pews emptied by Covid-19, a Catholic researcher asks, ‘What if they never come back?’ 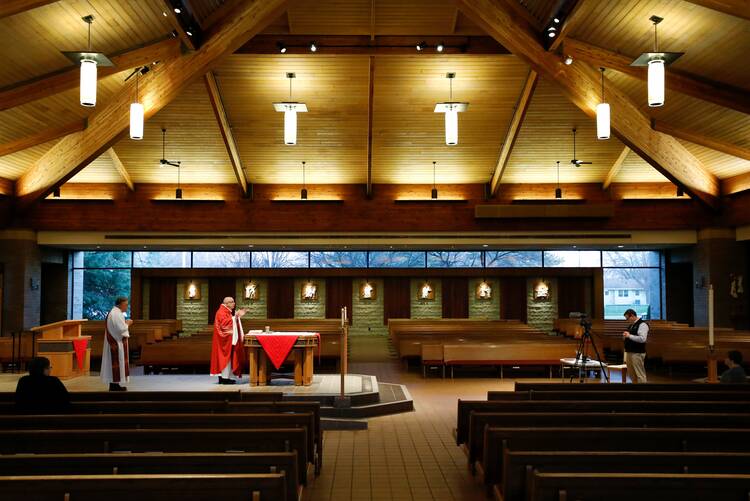 The Rev. Michael Amadeo celebrates Mass during the broadcast and recording of the Palm Sunday Mass at Our Lady's Immaculate Heart Catholic Church for parishioners to watch online, Saturday, April 4, 2020, in Ankeny, Iowa. Sunday Masses continue to be available online in response to the new coronavirus outbreak. (AP Photo/Charlie Neibergall)

VATICAN NEWS (RNS) — Covid-19 safety measures and social distancing have put further strain on many Catholic churches and parishes that have already seen their flocks dwindling. While many still hope things will go back to “normal” once a vaccine is widely available, one researcher is asking a tough question: “What if they never come back?”

Dan Cellucci, CEO of the Catholic Leadership Institute, a lay group that helps bishops and parish priests sustain their parishes, is in a good position to understand what was at stake for Catholics during the Covid-19 pandemic. CLI is constantly gathering data on the Catholic Church's depressive trend, especially in the West, in Mass attendance and the number of parishioners.

“This pandemic has led to the acceleration of so many trend lines we were already on,” Cellucci told Religion News Service in a phone interview from CLI's offices in Wayne, Pennsylvania, on Friday (Dec. 4).

Among those Catholics who say they attend Mass at least once a week, 15% have reported that they are falling or moving away from the church, according to CLI's survey of 230,000 churchgoing Catholics from 1,255 U.S. parishes over the past six years.

Even those who report no drift in terms of attendance said they don’t trust in the teaching authority of the church (52%), or never go to Confession (30%) or don’t believe that the church is crucial for their faith (47%).

About 10% of the respondents said that they go to Mass mostly out of habit. Cellucci questions whether this group's habit will survive a long period in which Masses have been prohibited or discouraged.

“When Covid-19 hit, immediately my alarm bell started going off,” Cellucci said. CLI data shows signs of “a great winnowing” among Catholic communities, he added, as parishes that have been able to adapt are attracting more followers, while those that were already challenged are now in a difficult spiral.

Pope Francis has suggested that if people were attending Mass out of habit, “then it’s best if they stay home,” before adding that in overcoming “this difficult trial” of Covid-19, it's possible that “the faithful will be more true, more authentic.”

Cellucci said that while the prospect of a smaller church “may be in fact our reality, it should never be our goal.” While the aggregate data from CLI “is very bad and very daunting,” he added, some pastors and church leaders have rolled up their sleeves to face the challenge.

One of Cellucci’s main concerns is the tendency in the Catholic Church "to look down and stay huddled,” instead of doing what the situation calls for, which is “to push ourselves and each other to lift our heads up.”

The finding is in tune with Francis' war on clericalism — the mentality among clergy that their power rests in their position, rather than service.

“If our faith is so concentrated in these men as opposed to in the Lord we are setting ourselves, and them, up for failure,” Cellucci said. “We really need to redirect people away from their buildings, away from their comfort zone and away from cults of personality to the only personality that matters, which is the person of Jesus Christ.”

Younger Catholics have shown themselves to be particularly unattached to the physical presence of the church and individuals, choosing instead to find faith communities online, Cellucci said.

He credits Francis with foreseeing this trend in a July document on “The pastoral conversion of the parish community in the service of the evangelizing mission of the church," in which the pontiff invited priests to leave their churches and meet faithful where they are.

“Any pastoral action that is limited to the territory of the Parish is outdated,” Francis wrote, adding that this attitude “appears to be more interested in preserving a nostalgia of former times as opposed to looking to the future with courage.”

The pope also encouraged clergy to include laypeople as much as possible in the life and mission of the parish, while maintaining that priests remain the “protagonists of evangelization.”

The pandemic, by closing buildings, has forced some of this thinking on parishes, forcing them to collect emails and organize online events, Cellucci said.

According to his data, too, some who never attended church have begun to explore the faith for the first time. “There are a lot of challenges in this environment,” Cellucci said, “but also a lot of opportunities.” The only way to emerge stronger is to be “entrepreneurial and innovative,” he added, taking advantage of the new freedom generated by the pandemic.

“If we can encourage our parish leaders, clergy and lay, to be courageous I think we can make the right choices, and we can be beacons of light in this otherwise very dark world that we are facing right now,” he concluded.