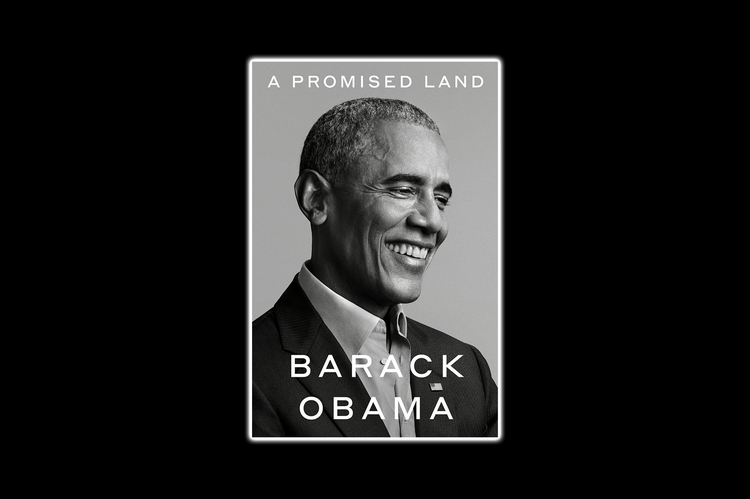 “A Promised Land” by Barack Obama. Photo by Pari Dukovic.

(RNS) — Former President Barack Obama’s new book, “A Promised Land,” only mentions four pages in its index under the category “faith and.”

But the title of the book by the 44th U.S. president invokes biblical imagery — a land promised by God to his people — and Obama includes the role of religious institutions, faith leaders and personal traditions throughout the 750-page book. On the page after his dedication of the tome to his wife and daughters, Obama features the words from an African American spiritual: “Fly and never tire/There’s a great camp-meeting in the Promised Land.”

While friends and strangers have told him they believe God engineered his road to the White House, Obama says he didn’t view his political path as a call from God.

“I suspect that God’s plan, whatever it is, works on a scale too large to admit our mortal tribulations; that in a single lifetime, accidents and happenstance determine more than we care to admit,” he writes, “and that the best we can do is to try to align ourselves with what we feel is right and construct some meaning out of our confusion, and with grace and nerve play at each moment the hand that we’re dealt.”

Obama was asked at a 2008 California fundraising event for wealthy donors why he thought working-class Pennsylvania voters opted for Republicans. His response included the words “they cling to guns or religion,” referring to frustration over job losses in their region.

The former president calls that response “my biggest mistake of the campaign,” one that he said could have been due to fatigue or impatience.

“Even today, I want to take that sentence back and make a few simple edits,” Obama writes. “I would say in my revised version: ‘and they look to the traditions and way of life that have been constants in their lives, whether it’s their faith, or hunting, or blue-collar work, or more traditional notions of family and community.’”

He said “the best policies in the world don’t matter to them” when Republicans tell working-class people that Democrats oppose traditions they may cherish. He later notes that Sarah Palin, Republican opponent John McCain’s running mate, included his original words during her 2008 Republican National Convention speech.

He respected his former pastor, the Rev. Jeremiah Wright, before he had to part ways.

Obama writes that, especially from his perspective as a young man, “the good in Reverend Wright more than outweighed his flaws.” Obama had noted, as he attended and joined Trinity United Church of Christ in Chicago, that some of the pastor’s sermons were “a little over the top.” But when news coverage showed his pastor speaking of an America that believes in Black inferiority and white supremacy “more than we believe in God,” Obama chose to withdraw his invitation for Wright to give the invocation as he announced his candidacy.

And after more of Wright’s sermons started appearing in loops on broadcast media, Obama distanced himself from the minister with a speech on race that drew a record number of online watchers.

Then, after Wright “unleashed a rant for the ages” at a National Press Club appearance, Obama says he was forced to “permanently sever my relationship with someone who had played a small but significant part in making me the man that I was.”

Obama recalls a time later, as he awaited primary vote outcomes, how a couple of African American longtime friends reviewed campaign highs and lows and took turns “acting out some of the more excruciating lines” from Wright’s Press Club appearance: “we all started to laugh and couldn’t stop, the kind of deep, tear-inducing, falling-out-of-your-chair laughter that’s a kissing cousin to despair.”

Another minister helped him regain confidence.

While Wright’s use of “audacity of hope” gave Obama a book title and a key phrase for his 2004 Democratic National Convention speech, another minister influenced him by shoring up his confidence.

The Rev. Otis Moss Jr., whose son succeeded Wright at Trinity UCC, called Obama early in the controversy surrounding Wright. Moss knew some Black Americans had questioned whether Obama was ready for the White House.

Obama writes that Moss described himself and other civil rights veterans as “the Moses generation” who marched, were jailed, ”got us out of Egypt,” but could only go so far.

“You, Barack, are part of the Joshua generation,” Obama says Moss told him. “Perhaps you can learn from some of our mistakes. But ultimately it will be up to you, with God’s help, to build on what we’ve done.”

Moss’ words about leading Americans “out of the wilderness” were what Obama says he needed to move on from the Wright controversy and forward in his campaign.

“It’s hard to overstate how these words fortified me, coming as they did almost a year before our Iowa victory, what it meant to have someone so intimately linked to the source of my earliest inspiration say that what I was trying to do was worth it, that it wasn’t just an exercise in vanity or ambition but rather a part of an unbroken chain of progress.”

RELATED: In his own words: President Obama on faith

Obama — who later spoke of successive generations in his speech about race — said Moss’ public support, along with that of other co-laborers with the Rev. Martin Luther King Jr., such as the Rev. Joseph Lowery and the Rev. C.T. Vivian, helped boost support of his campaign among Black Americans.

He tried to keep his prayer life private.

Obama mentions his “broader skepticism toward organized religion” but says he often turned to private prayer.

Not long after he was shown the Lincoln Bible on which he would be sworn in, Obama paused before entering the inaugural platform.

Months before that moment, Obama had paid a visit to Jerusalem’s Western Wall — where pilgrims have long left petitions to God — as he was feeling the weight of what lay ahead if he became president.

“I’d written my own prayer on a piece of hotel stationery,” he writes. “I had assumed those words were between me and God,” he said of the personal request he placed within a crack in the wall. “But the next day they showed up in an Israeli newspaper before achieving eternal life on the internet.”

He’s not superstitious but carried religious symbols among his collection of charms.

Obama writes that he never had a rabbit’s foot or lucky number as a child.

“Over the course of the campaign, though, I found myself making a few concessions to the spirit world,” he says.

He developed a habit during his campaign of carrying five or so tiny mementos people had given him, from a biker’s “lucky metal poker chip” to a nun’s silver cross.

“My assortment of charms grew steadily: a miniature Buddha, an Ohio buckeye, a laminated four-leaf clover, a tiny bronze likeness of Hanuman the monkey god, all manner of angels, rosary beads, crystals and rocks,” he writes.

Obama calls them a “tactile reminder” of the people he had met and of their hopes.

“If my cache of small treasures didn’t guarantee that the universe would tilt in my favor,” he writes, “I figured they didn’t hurt.’’

Show Comments ()
Join the conversation: Login or create an account
Before you can comment, you need to update your profile to include your first and last name, as required in our comments policy. Then reload this page and you'll be set up for commenting. Update your profile
More: Barack Obama / Literature