13 saints (and 2 Marys) to pray to on Election night 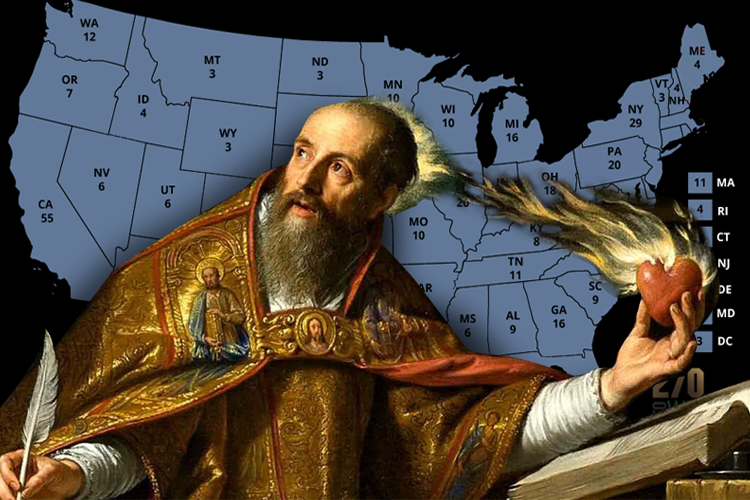 Maybe it is fitting that this tense, tough fight for the presidency of the United States should culminate in November, the month when Catholics remember all the saints who have come before us and to whom we might turn for intercession. And there will be millions praying tonight—for one outcome or another or maybe that we might just coexist in peace no matter the result.

There are many Catholics who will just go straight to the C.E.O. of the corporation, of course, and pray directly to God. Many others will rely on the rote prayers learned in our formative years, including Marian devotional prayers such as the rosary, “The Memorare” or “Ave Maria.” There are plenty of saints in heaven, however, and a lot of them are patrons of causes that are particularly relevant today. Here are a few possible intercessors:

1. St. Chad, patron saint of disputed elections. We realize this might sound like a bad pun referencing the 2000 election between George W. Bush and Al Gore, when “hanging chads” on ballots may have cost Mr. Gore the electoral college, but the church really does recognize St. Chad. Abbot of the monastery in Lastingham and later bishop of York, St. Chad stepped down from office when another man made a claim to the bishopric. St. Chad, may the loser tonight concede with grace and humility!

St. Chad stepped down from office when another man made a claim to the bishopric. St. Chad, may the loser tonight concede with grace and humility!

2. St. Edmund Campion, S.J., patron saint of journalists. He is dear to the hearts of our editors not just because he is the patron saint of America Media but because he is the patron of all journalists. And if you’ve waded into the political fray as a writer this past year, you know why you need the prayers of this famous pamphleteer and martyr for the faith.

3. St. Thomas More, patron saint of politicians. Another martyr for the faith, St. Thomas More was once one of the richest and most powerful politicians in England—until he refused to bow to the will of the tyrant Henry VIII and recognize Henry’s marriage to Anne Boleyn. “I am the king’s good servant, but God’s first,” he said before he was executed. Let us pray that politicians on both sides of the aisle act with integrity in office and render unto God the things that are God’s. (Side note: St. Thomas More would also put Donald J. Trump to shame in a war of insults. He once called Martin Luther “a pimp, an apostate, a rustic, and a friar.”)

Jesuit tools to help you survive the election (and its aftermath)
James Martin, S.J.

6. St. Monica, patron saint of patience. With an unprecedented number of mail-in ballots, record turnout and a patchwork of rules dictating how votes are counted in key swing states, it is possible we will not know the outcome of the election tonight—and if it is extremely close or contested, even this week. St. Monica knows what it is like to wait, and wait. The long-suffering mother of St. Augustine of Hippo, St. Monica bided her time as her son lived a life of profligacy and lusty excess, knowing that her prayers would one day be answered with her son’s conversion.

7. St. Augustine.Another patron saint of printers, he is also often cited as a patron saint of brewers. (Why are these two professions always linked in our hagiographies? Harrumph.) St. Augustine’s lifelong search for truth is also a valuable reminder that we all need protection against the spread of misinformation.

St. Augustine’s lifelong search for truth is also a valuable reminder that we all need protection against the spread of misinformation.

8. St. Jude, patron saint of lost causes and “of things almost despaired of.” Supporters of one candidate or another are going to seek some refuge in this famous saint of the apparently hopeless case.

9. St. Donald of Ogilvy. An eighth-century Scottish saint (and the namesake of our current president), he had nine daughters, all of whom refused to marry. St. Donald then turned his home into a semi-hermitage where he lived the rest of his days with his daughters, thereafter known as the “Nine Maidens.” St. Donald is the patron saint of—we are not making this up—frustrated plans.

10. St. Joseph, husband of Mary. There are many Josephs from whom to choose if a Joe Biden supporter were looking for intercession, but none quite like Joseph, the foster father of Jesus. Among the groups for whom he is considered a patron are dreamers, immigrants and working-class folks. Is it any wonder that Bishop Joseph C. Bambera of Scranton, Mr. Biden’s hometown, declared 2020 as a “Year of Saint Joseph” in the Diocese of Scranton?

11. St. Barsabbas and St. Matthias. Perhaps the saintly duo we need to invoke most this Election Day, they are the only pair of running mates ever canonized. Both followed Jesus throughout his ministry, without seeking reward or to be counted among the Twelve. In the end, St. Barsabbas lost to St. Matthias when lots were cast to replace Judas Iscariot after he betrayed Jesus. Still, St. Barsabbas went on to proclaim God’s word among the people and do good. Little is known of St. Matthias after his election. We hope, through these saints’ intercession, whoever wins might receive the same grace to recede from public office and avoid making the daily headlines.

Perhaps the saintly duo we need to invoke most this Election Day, Sts. Barsabbas and Matthias are the only pair of running mates ever canonized.

12. St. Martin de Porres, whose feast we celebrate this Election Day, is the patron saint of the poor, of people of color and of those who seek racial and social justice. Whoever occupies the White House come Jan. 20, we can ask St. Martin that he work tirelessly to address the social inequity and racial tension that mar our society.

13. St. Dymphna. This Irish-born martyr is the patron saint of mental health, stress and anxiety. Some of her remains are actually interred in a shrine that bears her name in Ohio. Can we just consecrate all of 2020 to St. Dymphna?

14. Our Lady of Guadalupe. The patron saint of all the Americas, Our Lady of Guadalupe is the go-to saint for tens of millions of U.S. citizens. Her support of St. Juan Diego when his bishop refused to believe his reports of her appearance also makes her something of a patron saint against fake news (or the false accusations of such!). May the winner of tonight’s contest govern for all Americans and also pursue policies that lift up those struggling for a better life beyond our borders.

All you holy men and women, pray for us!