A church in Rome has over 3,000 skeletons on display. They give a chilling—but hopeful—reminder about death 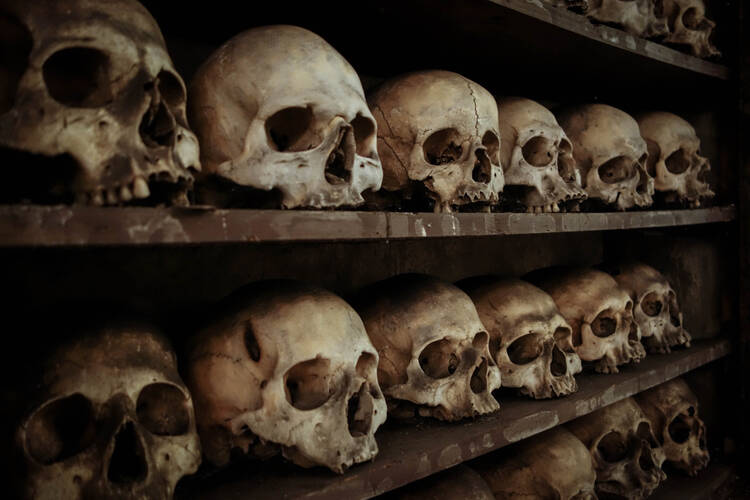 Two skulls interrupted my walk in Rome. Three times larger than their natural size, with hollow eyes and missing teeth, they were carved in stone on the facade of a building. Passersby stared, and I waited in a group of them to take the same picture everybody took: the grey skulls framing the door, a flying hourglass above their heads. This was the oratory of Santa Maria dell’Orazione e Morte: Holy Mary of Prayer and Death. Other Catholic churches were named for saints, places or people, but this one was named for its purpose, hinted at by the symbols looming above us.

During the day people occasionally tried the front door, but it was locked. But in the evenings, a small side door was open infrequently, at unpublished hours. I walked past it every night until I found it open. Near the entrance was a plaque, an engraving of a skeleton with feathered wings unfurling a banner: hodie mihi, cras tibi. “Today me, tomorrow you.” I entered unescorted into a small room at the bottom of the stairs. Here, I was surrounded by shelves and altars made of bones.

Human bones are not particularly difficult to see in Rome. The famous Capuchin crypt is a short drive away, and it costs less than 10 euros to enter. It is famously macabre; and as in the Paris catacombs, you walk through in a line with other tourists. Famous visitors have included Nathaniel Hawthorn, Mark Twain and, naturally, the Marquis de Sade. In room after room you can see the bones of 3,700 friars worked into architectural niches of thighs and floral arrangements of pelvises.

I entered unescorted into a small room at the bottom of the stairs. Here, I was surrounded by shelves and altars made of bones.

The crypt at Santa Maria dell’Orazione e Morte is utilitarian by comparison. The exception is five chandeliers made of what appear to be spine and smaller bones. I wondered who decided they should be electrified and ran the wires to the light bulbs inside each one. In front of me was an altar of skulls and neatly stacked legs. Behind me was a cabinet of skulls and a cross made of the same set into a plaster wall. An incomplete skeleton leaned in a corner, propped up by a wooden pole. These were the bodies of people who died in the fields outside of Rome, killed by malaria or forgotten epidemics.

Being in the crypt was transgressive in a way that the Capuchin crypt was not. I wasn’t sure if I was supposed to be there. There were no barriers to mark off the space for the living from that for the dead. There were no signs telling me not to take pictures, so I took out my phone. There is a certain pleasure in taking photos of a startling number of the same thing, like the countless selfies taken in Yayoi Kusama’s infinity rooms. In these photos, my view was singular. I was centered in a room of sameness. I posted the crypt picture on Instagram, marveling at the relic of the past I had finally seen. If these bones were supposed to say “today me, tomorrow you,” tomorrow felt as if it had come and gone centuries ago, and I had been left unscathed.

The crypt has been closed more and more frequently in recent years and ny hopes of returning to Italy were dashed by the arrival of a deadly pandemic. To be honest I don’t think of that first trip much. What has stayed with me was the last time I saw the crypt of Santa Maria dell’Orazione e Morte on the evening of Nov. 2, All Souls Day.

If these bones were supposed to say “today me, tomorrow you,” tomorrow felt as if it had come and gone centuries ago, and I had been left unscathed.

A nun collected alms in a basket and offered to escort anyone who had spare change down the stairs. The room was mostly unchanged, but the skeleton who had been propped up with a pole was now in a heap on a table. The nun encouraged me to look closer. Some of the skulls had names, dates and occupations carved into their foreheads in careful script. Giovanni was killed in the countryside. Loreta had also died there. Natanaele was “our brother,” one of the members of the fraternity who carried back the bodies from the fields. Here, heads were headstones. Without horror or shock I thought of my own fate. I remembered a sign at the entrance to the Capuchin crypt, written in five languages: “What you are now we used to be; what we are now you will be.” The first time I had seen this crypt I was struck by what I saw. This time I was struck by who. With the nun looking on, I took photos again, this time with the knowledge they were portraits.

Eight thousand six hundred people were buried in the crypt at Santa Maria dell’Orazione e Morte at one point. Most of their names were carefully recorded, though now this list is in an archive where few will read it. The list was meant to preserve the identities of the dead, and the engravings were meant to do the same. But still some people slipped away. The small crypt used to be eight rooms, a work of art in human bone beyond what the Capuchins had imagined. But building the Tiber’s embankments required the destruction of all but this room. Most of the bones were buried, and the bodies that were left here became incomplete. A few skulls are identified, but most items—the femurs, thighs, uncarved skulls and chandeliers are mismatched and go unnamed.

On All Souls Day, around the corner from the oratory, a church on Tiber island has a Mass for the souls of the unknown who have died within the year. These souls are generally thought of as the poor, the lost, the abandoned or afflicted, but I found myself thinking about the souls that slip away from the memories of the living. After the Mass, we processed by candlelight, led by people in red capes and hoods, and tossed a wreath into the Tiber. Photojournalists jogged around us, documenting a ritual that was a relic from the past.

Someday, Covid-19, the epidemic that occupies my thoughts, might be listed in history books as “an epidemic,” like the epidemics of 1552 and 1896 that felled some in the crypt I saw. Only the name of our disease will be said by future scholars, but during my lifetime it will be specific. We will make careful lists of our dead, just like this Roman brotherhood did, and this time, I will see people I know on it. Many will also have their names carved, not in their bones but in stone, though I know even this won’t be permanent. Eventually even stone is worn away or bulldozed in the name of progress. (Did you know Central Park in New York was built over cemeteries? Parts of San Francisco were, too.) The barrier between the named and unnamed is temporary, and grows more fragile every year. Someday the last archive that holds my family’s names will be filed away or lost. Someday my own name will become obsolete.

Not all is lost when we lose our names. As I look back on the photos I took, the skeletons carved into the facade of Santa Maria dell’Orazione e Morte hold one last message, a message of hope hidden in the threat of death. “Today me, tomorrow you.” The skeleton who holds this message and all the disembodied skulls above have wings. This isn’t death as we know it, but a method of transport into a new kind of life. A passage in the Mass, the Creed, sticks in my head: “I look forward to the resurrection of the dead.” The thought of that used to scare me when all I could think of was a scene like what I first saw in the crypt. But to fixate on that is to ignore the last words “…and the life of the world to come.” All Souls is not just a remembrance of those we have lost, whether to death or to time. All Souls is a remembrance that beyond this world, there is more to come.

More Stories from America
– Blessed Carlo Acutis watched ‘Pokémon.’That’s my kind of saint.
– A meditation for All Souls’ Day: How has the love of others changed your life?
– Día de los Muertos is a celebration—even during a pandemic. 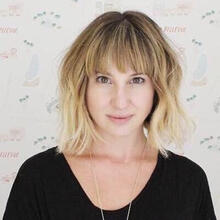 Elizabeth Harper is a writer and theater professor living in Los Angeles.

@CadaverFormosus
Show Comments ()
Join the conversation: Login or create an account
Before you can comment, you need to update your profile to include your first and last name, as required in our comments policy. Then reload this page and you'll be set up for commenting. Update your profile